I was about to say that my roommate and I are like ships that pass in the night, but I just googled and that seems to have a kind of a romantic connotation. So let me say this: I live with my roommate who is great, but I don’t get to see her very often.

She’s busy with grad school applications; I’m busy baking, reading the Girl with the Dragon Tattoo series and walking around trying to figure out how to exercise with a knee ridden with tendonitis or something equally annoying.

But last week, we finally got together for a roomie date and we went on a bender. A baking bender. It was quite fabulous.

I made those modified pumpkin muffins I showed you Monday and she made this pumpkin bread, which she found on FoodGawker (and she looked through a LOT of recipes, so you should be proud, Melissa!). This pumpkin bread is totally the dreamily indulgent, tight-crumbed type of treat that is exactly what it tastes like. That is, full of refined sugar and flour and oil. The type of stuff I try to avoid on a regular basis. 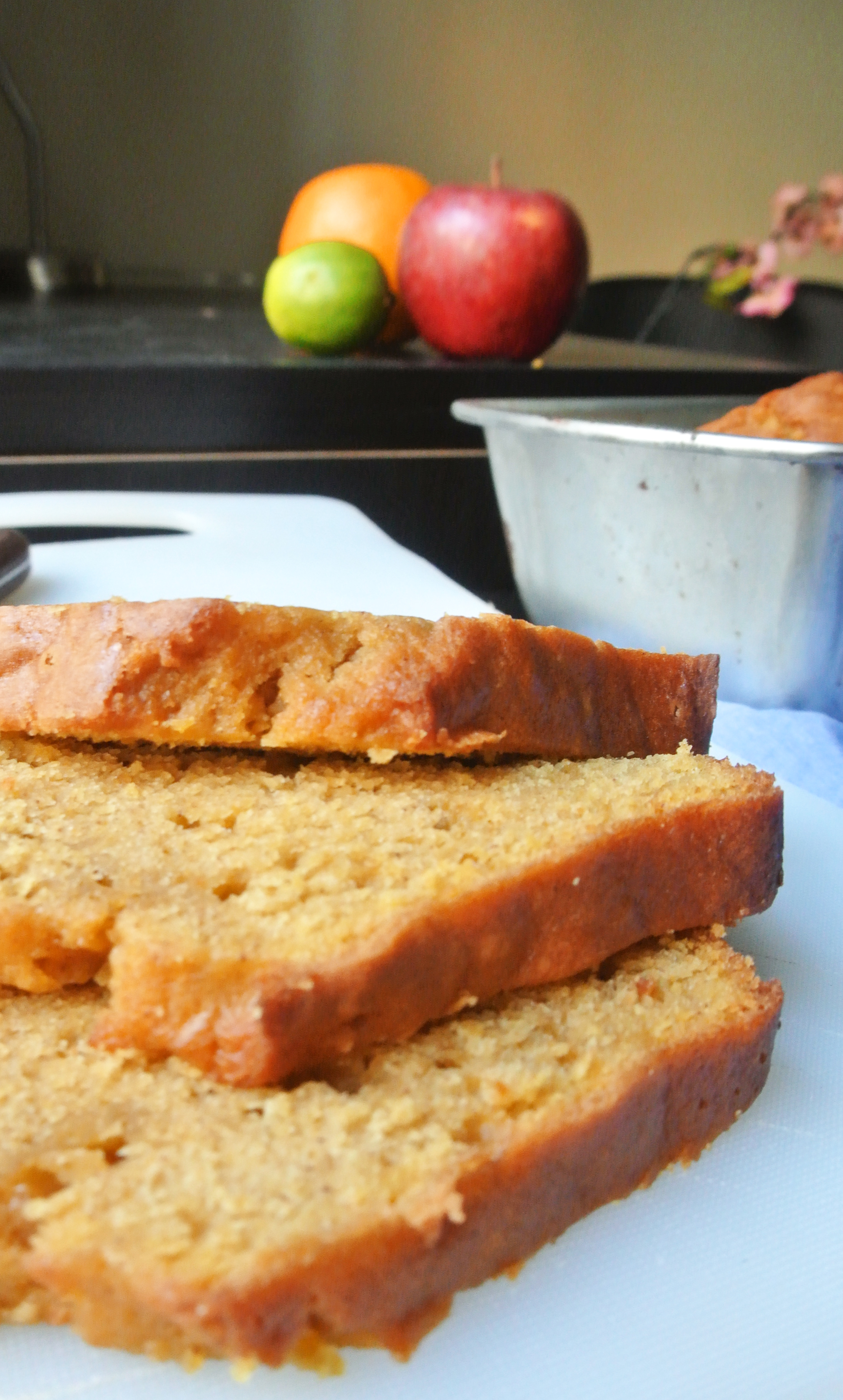 But. It’s delicious. Especially in moderation. Which is totally why both the bread and the muffins disappeared in about two days. In our humble abode of two people.

Ack. I will say that when we tried both pumpkin items right out of the oven, we actually liked the modified, low-fat muffins better. The pumpkin bread grew on us (all too quickly), but it was a sweet, cinnamon-y reminder how good modified recipes can be!

The original recipe lists butter, but says you can use canola oil in a pinch. I’ve always found that my quick breads turn out moister when I used oil, so that’s what my roommate used and the result was a very tender and moist bread. Next time, I’d definitely try cutting down on the oil in a similar fashion to these muffins, swapping in at least half yogurt or applesauce. You can’t hardly tell in pumpkin bread!

The original recipe also called for ginger,  nutmeg and cloves–the feisty trio that makes up pumpkin pie spice, which I often omit because I don’t have them and because I didn’t particularly like nutmeg the last time I tried it. I might try have to try again soon, but in the meantime, I’d try upping the cinnamon to 2 tsp to compensate for the lack of other spices.

Also, how much more awesome do you think it’d be if you added milk instead of water? Or yogurt (probably not the Greek kind, since that would be too thick)? I think it’d be great. If you make this, you should try it and let me know how it is!

Pumpkin Bread
Adapted from Kids in the Sink

Preheat oven to 350 degrees and grease a loaf pan.

Zucchini bread bake off is live on the blog!! Hopi