I have to apologize for the lack of a pancake post on Friday. Booo!
Sometimes life just gets in the way.

This weekend, life took on my alma mater’s (I have an alma mater?? I must be old.) 100th birthday celebration. As part of the Centennial celebration, the pinnacle was a mind-blowing sound and light show, or “spectacle,” (skip to 1:40 for the start of the cool stuff!). Standing in the middle of the dark quad with dozens of other students, alums and associates while lights spilled and flickered over the brick architecture, narrating Rice’s history in a series of images, music and snippets of spoken words made me feel like I was at Hogwarts. Serious magic, guys. It was hard to fathom all the incremental measurements, calculations, math and technology hurdles the creators would’ve had to overcome–not to mention handling the enormous amount of research of Rice’s history and then compressing the story into 20 minutes of visual story-telling translated into lights and sound.

Omg. How cool would it be to have a job like that?

But ANYWAY. I spent the weekend whipping up a bunch of pancake recipes that have been on my brain for the past few weeks. So we’ll have lots of pancakes to chat about for weeks to come.

Since it’s not Friday yet, let me tell you about this cornbread. My friend and I were also planning on a chili making night this Sunday. In anticipation of this, I took advantage of a completely free Sunday afternoon to make my own quinoa flour and make this double quinoa cornbread.

Making your own quinoa flour really isn’t as difficult as one might predict, given the absurd cost of buying it in the store ($10+ for a tiny sack!). Toast it until golden, then grind to a powder. Easy peasy. (As long as you have a food processor, that is.) 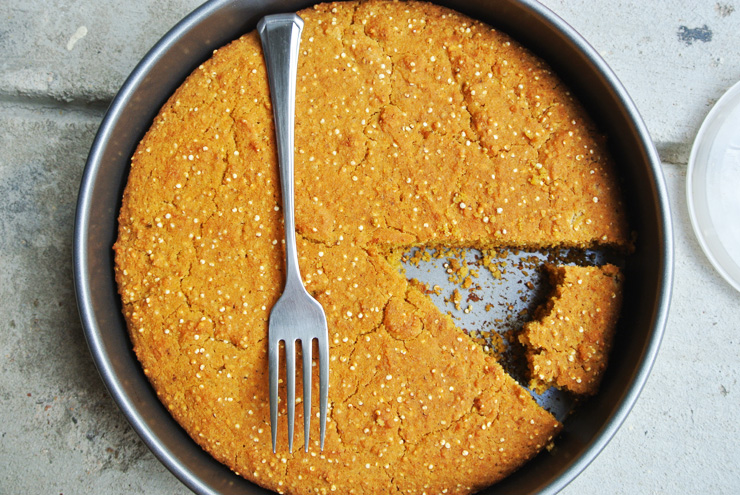 This cornbread could not be farther from your traditional cornbread recipe. It’s chock-full of hearty grains of quinoa (“keen-wah”…for those that have been saying “keen-oh-wa” all this time…I feel you. I just want to call Fage yogurt “FAGE!”)

In addition to being super whole grain, this is vegan. And surprisingly, despite all these modifications, it manages to hang on to a good amount of that irresistible cornbread flavor. It’s got a nice crackly crust, a crumbly texture and a grainy heartiness that accents the corn meal with pops of quinoa. It’s like, not really that sweet at all. And it’s sooooooo healthy 🙂 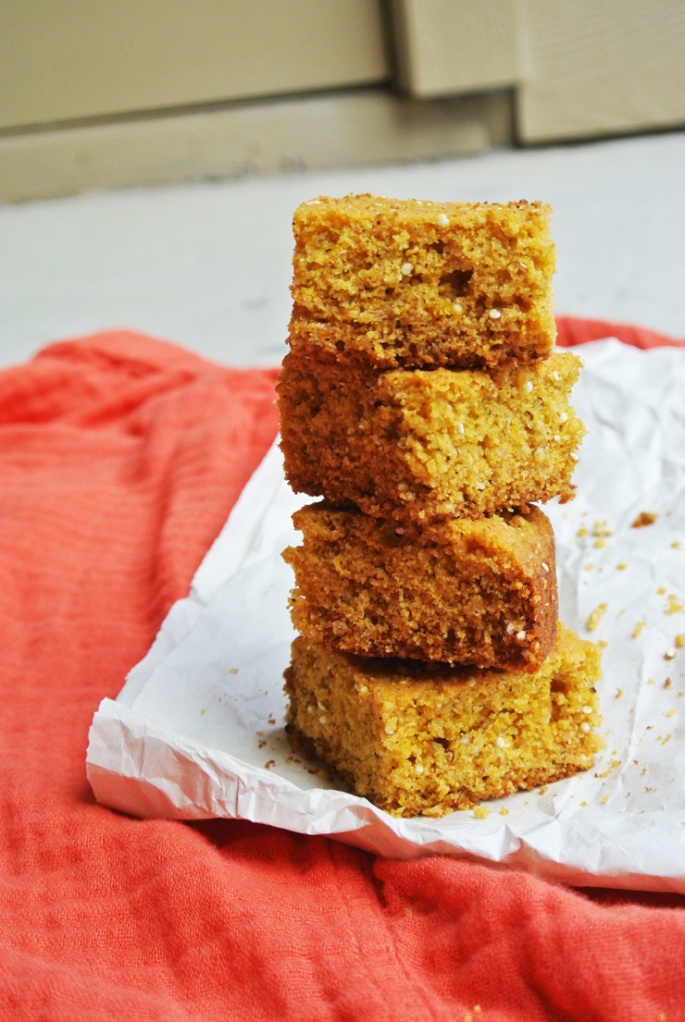 I will admit that my first impression wasn’t “OMG YUM!”–this hearty concoction that crumbles apart in grainy particles in your mouth is not the silky-moist-tender cornbread that I generally prefer. So I thought about shelving this and keeping it from the blog. But as I shot the cornbread in the diminishing afternoon Sunday light, my fork kept delving into the wide slice I’d carved out for photography purposes.

Now it’s the day after I made the cornbread and more than half of it is gone. Um, we didn’t even make the chili that was supposed to accompany this. You can draw your own conclusions. So I figured it was worth posting in case anyone is as weird as me and appreciates this odd-bird cornbread 🙂

Making your own quinoa flour is super easy if you have a powerful food processor. I went out to Costco (got caught in the rain for the second Sunday in a month while leaving with a cart full of groceries) and bought a sack of quinoa expressly for this purpose.

How to make quinoa flour:

Toast the quinoa in a pan over medium heat until the kernels start to turn golden and pop (the time will depend on the amount of quinoa you put in and the size of pan you use, but about five minutes or so). Remove from heat. Once cool, grind in your food processor until ground to a fine powder. Mine didn’t quite get there, but I figured it was fine if it was a little chunky since whole quinoa was in the recipe anyway. That’s it!

The original recipe called for 5 tablespoons of corn oil. I swapped in olive oil and downsized the amount to 4 tablespoons, replacing the missing oil with one tablespoon of applesauce and one of yogurt, since it worked so well in my pumpkin muffin recipe. I might add another tablespoon or two of yogurt next time for extra moisture, but I think the flavor was definitely there from the olive oil.

Set a rack in the middle of the oven and preheat to 425°F. Grease an 8-inch square pan or 9″ round pan and set aside.

In a medium skillet over medium heat, toast the quinoa, shaking the pan occasionally, until the grains start to pop, 3-5 minutes. Transfer to a large mixing bowl.

Add the cornmeal, quinoa flour, all purpose flour, baking powder, baking soda, and salt to the bowl with the toasted quinoa. Whisk to combine.

In a separate bowl, whisk together the rice milk, apple cider vinegar, agave nectar, sugar, applesauce, yogurt and olive oil. Transfer the greased pan to the oven to preheat until sizzling, about 5 minutes.

While the pan is heating, combine the wet mixture with the dry mixture and quickly mix just until the dry ingredients are moist. Do not over-mix or the bread will be dense. Remove the pan from the oven and scrape the batter into it. Return to the oven and bake on the center rack for 20 to 25 minutes, or until the cornbread is firm to the touch and a toothpick inserted into the middle comes out clean.