I’ve made these scones two times in less than one week. They are IN.SANE. 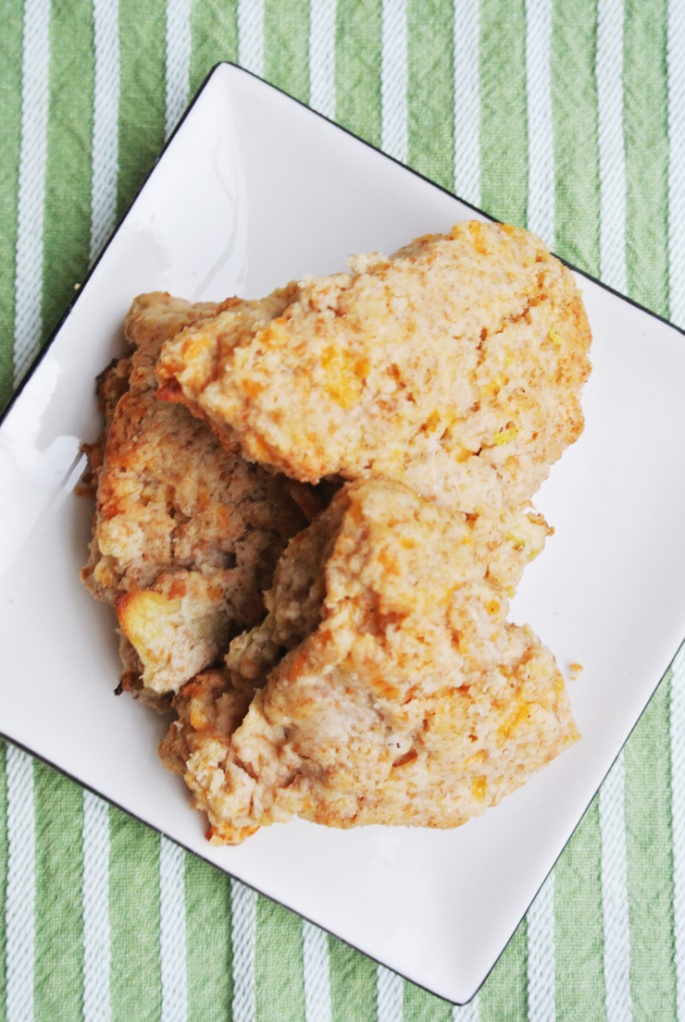 Coming from Smitten Kitchen, I would expect no less. But these little savory pockets of buttery fluffiness had me AND my boyfriend practically swooning. 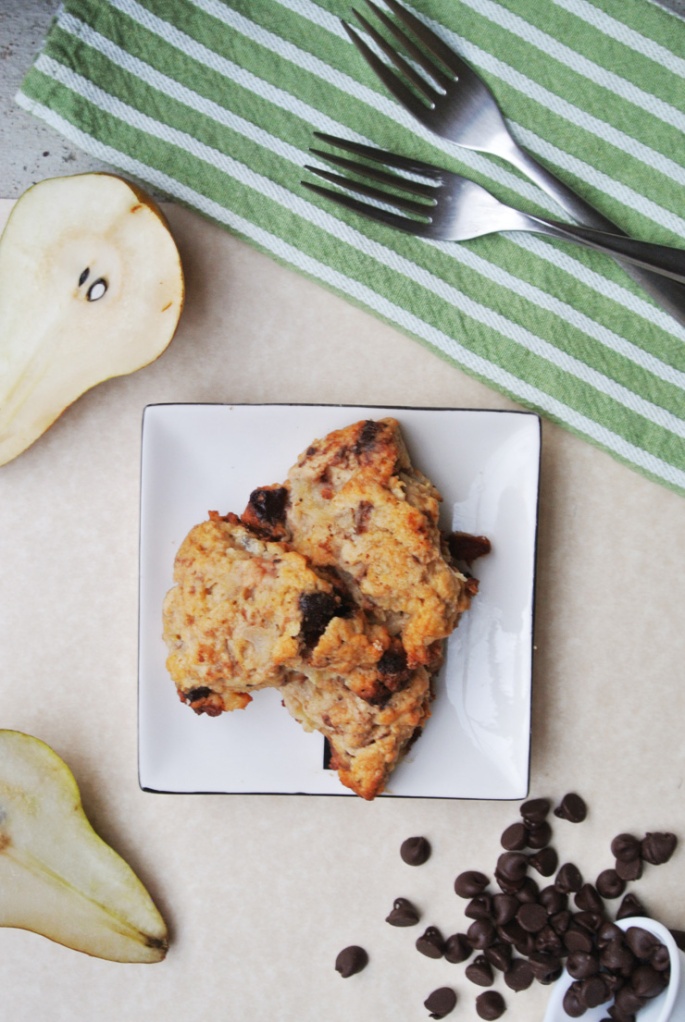 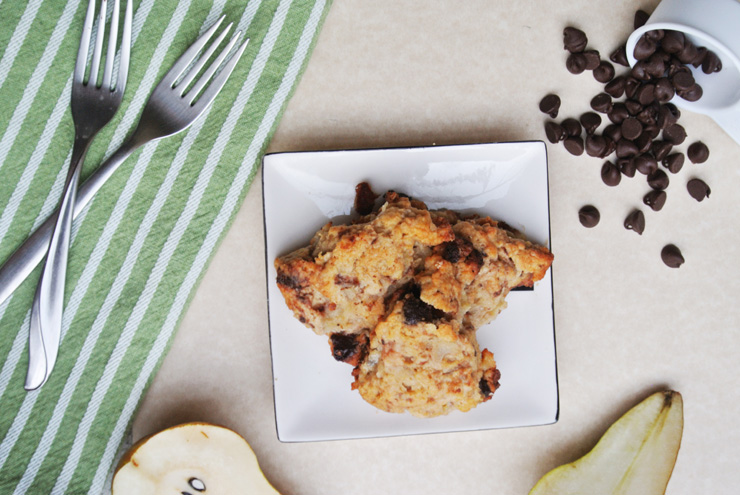 Or maybe not. Maybe it was just a matter of that nothing could live up to the apple cheddar scones when standing side by side. These scones are buttery, cheesy carb-y heaven. With restraint. They’re not oily with fat or gooey with cheese–they’re just puffed, craggy-edged triangles scented with salty cheese and rich with hints of butter.

They were SO GOOD. Except when I made them for my brunch spread, there was some complimentary things tossed in the scone platter’s general direction, but the real spotlight-stealers were… 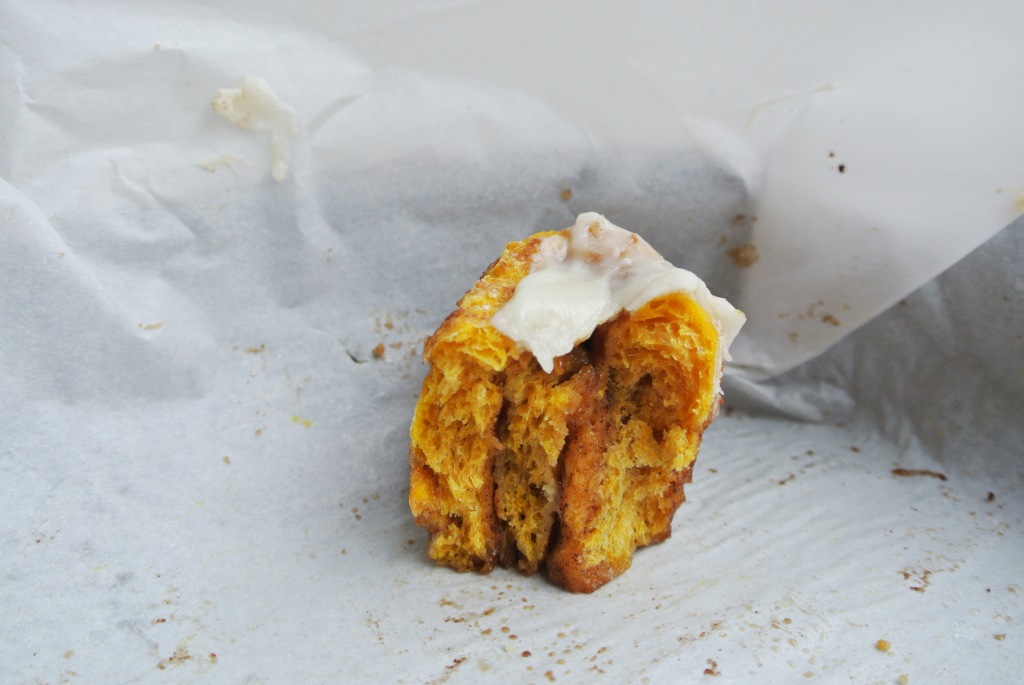 That’s all that was left of the 16 cinnamon roll batch I made for 9 people. (Okay, some people took some home. But I was left with one, which my sister promptly devoured.)

These cinnamon rolls truly are pure pumpkin perfection. There’s even a restrained 6 tablespoons of butter in the whole recipe, much less than I thought a cinnamon roll recipe would call for.

The first time I made the scones, I brought them to work. The second time was for brunch this past Sunday. You can see the poorly photographed spread below (this was the best of the quick photos I snapped before I unleashed my hungry friends!): 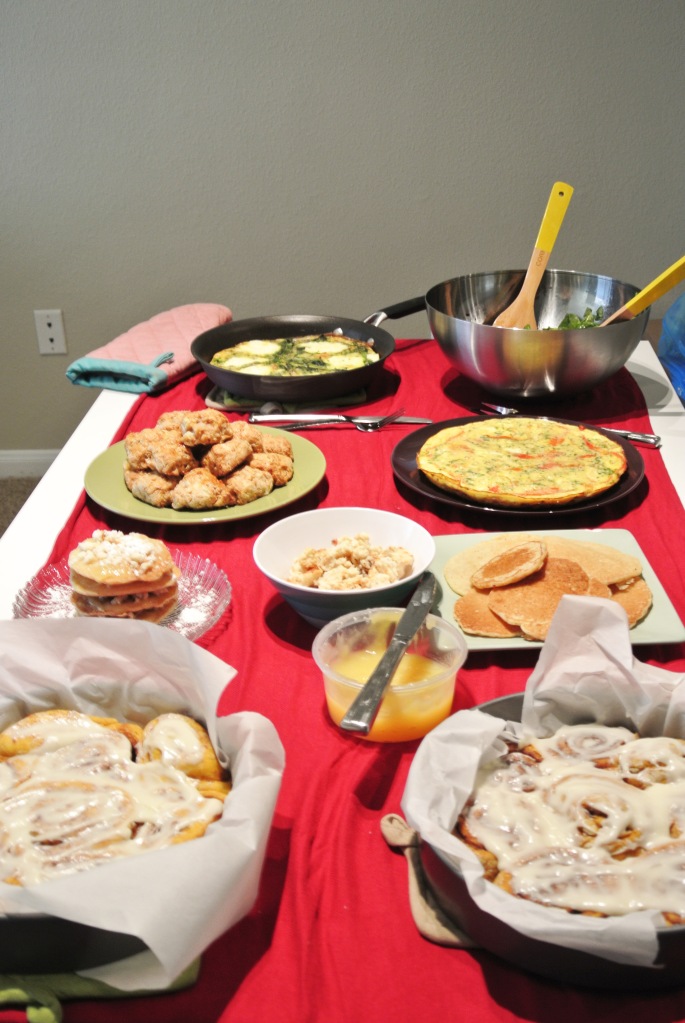 What is all that business? Well, from back left clockwise…

It was a lot of cooking and it was all quite fun. It would be a super easy brunch if you’re actually an organized planner and you don’t prepare only one pan of cinnamon rolls the day before, then the morning of decide to double the batch. And make pancakes that require three steps. And make decisions about frittata cheese choices at the last second.

The frittatas are based on Joy’s onion and ricotta frittata. I subbed in a whole roasted red pepper with generous handfuls of caramelized onions and about 1/3 cup grated parmesan cheese in one, and about 1.5 cups of wilted spinach and half a cup of ricotta cheese in the other. I loved the red pepper one, but I forgot how spongy frittatas are (literally, like a sponge!) In the future, I will either be baking, scrambling, poaching or frying my eggs. I love the easy cooking method for frittatas (8 minutes on the stove, 10 minutes in the oven) but they’re not my personal favorite to eat.

But seriously, this brunch would be a breeze if you prep and freeze/refrigerate the scones and cinnamon rolls ahead of time. The day of, pop those in the oven, assemble the salad, and make a couple of frittatas, (a total of 20 minutes hands-on time), and everything’s ready to go.

And if you aren’t feeling hosting a brunch spread, at least make these.

Although I think practically all Smitten Kitchen recipes are perfection, I found that subbing in yogurt for the heavy cream and cutting the butter down by 2 tablespoons yielded lower-fat and still perfectly delicious results. Emphasis on the delicious. I also liked the heartiness of whole wheat flour to complement the apples and cheese–I think it’s better than plain white flour.

Sharp white cheddar cheese is recommended for aesthetic purposes, but I used orange since that’s all I could find, and I don’t think it looks bad. If you use whole wheat flour, it’ll kind of blend in.

Deb has this cool toss-everything-together-and-use-an-electric-mixer-paddle-thing to combine the dough, rather than the traditional pain-in-the-butt rubbing the butter in with your fingers method. I don’t have a paddle attachment, so took the less cool route and rubbed in the butter with my fingers (noted below).

Deb originally recommends making 6 gigantic scones; I like 12 for medium-small scones, 16 for delicate, three-bite scones. I baked all versions for around 30 minutes, but check them early and often!

milk of choice, for brushing
turbinado sugar, for sprinkling

Position a rack at the center of oven and preheat oven to 375 °F. Line baking sheet with parchment paper.

Peel and core apples, then cut them into one-sixteenths (chunks, not slivers). Do NOT cut them any smaller or they will turn into mush if you try to bake them according to the following directions, and then you’ll have applesauce scones. I know because I’ve done this.

Place them in a single layer on a baking sheet lined with parchment paper and bake until they take on a little color and feel dry to the touch, about 20 minutes. They will be about half-baked. Let them cool completely. (I put them in the fridge to speed the cooling.) Leave oven on.

Whisk flour, sugar, baking powder and salt together. Rub the cold butter chunks into the flour mixture with your fingers, then stir in the cooled apple chunks, cheese, yogurt and egg until just combined. Be careful not to overmix.

Flour your counter generously and divide your dough into two. Sprinkle both balls with flour and using a rolling pin or your hands, form into two approximately 5″ circles, about 1″ tall. Cut circle into 6 or 8 wedges. Transfer them to a baking sheet that has either been buttered or lined with a fresh sheet of parchment paper. Leave at least two inches between each scone.

Brush the scones with a tiny bit of milk using a pastry brush (or your finger) and sprinkle them with turbinado sugar. Bake until firm and golden, about 30 minutes. Let cool for 10 minutes before sampling.

“Do ahead: Scones are best the day they are baked. However, they can be made ahead of time and stored unbaked in the freezer until you need them. Simply brush them with the egg wash and sprinkle them with sugar, and bake them still frozen for just a couple extra minutes. This way they are always freshly baked when you want them. These scones were passable on day two and terrible on day three.”