Lest you think all I eat all day are pancakes and stuffed cupcakes, I’m sharing with you today one of my favorite recipes that I’ve made recently:

As a pescatarian, one of the only meat dishes I miss most are burgers. Along with chicken nuggets (weird) and meat dumplings like xiao long bao (TOTALLY justified), those are about the only things that I really long for. Veggie burgers are good (I’m <3 mashed-beyond-all-recognition texture), but just not quite the same. I’ve had some good veggie burgers and I’ve had some bad ones. For the most part, I like them.

BUT. I recently had an outstanding, though very garlicky (can the Breath gods please remove their curse?), veggie nut burger. The menu described the burger as a “veggie patty made with sautéed vegetables, potatoes, almonds, fresh corn, bread crumbs, and organic hummus.” So I took an easy sweet potato veggie burger I’d been eyeing and added more veggies, almonds, corn, flax and spices. 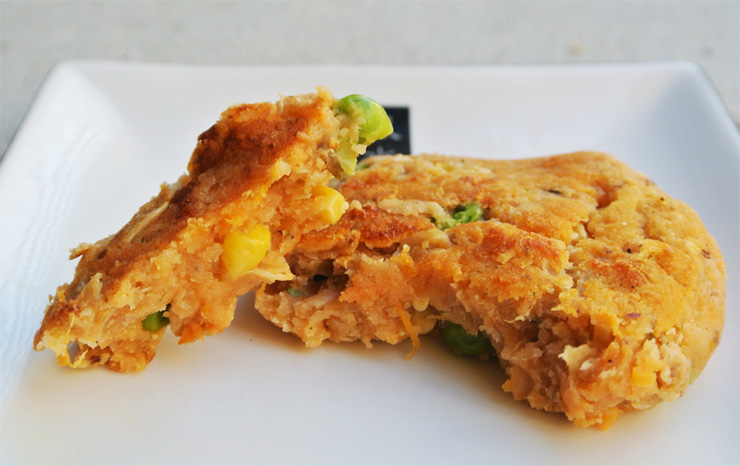 I also tried making another veggie (lentil, really) burger a few nights later, which looks like it has the potential to be mind-blowing, but I took a few shortcuts and it turned out fairly well, but nothing super essential. Still, I think it’s worth giving a try sometime. When you have a few hours on hand. 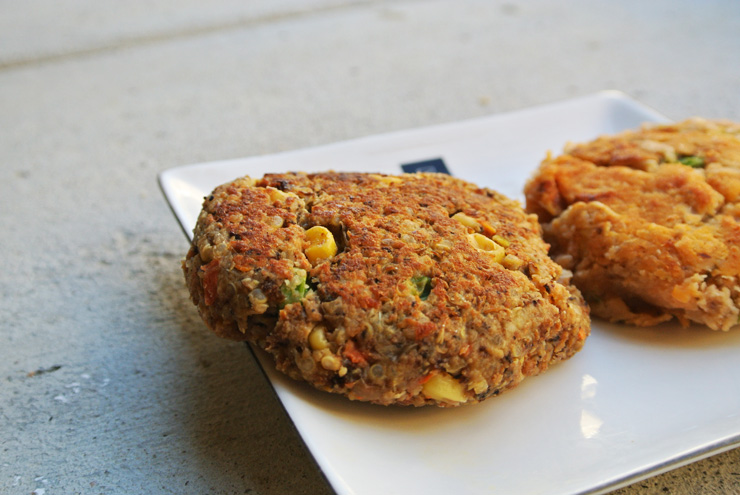 Minus the corn and peas, don’t those look oddly like the real thing?? Anyway, I have to tell you a secret. None of these photos are the burger that I’m writing about. I tried a second version (the pinker, salmon-burger-looking-shot up there) without onions to oblige my sister, but it just wasn’t the same, although it was prettier. Adding onions (super key), flax and black-eyed peas will make these slightly darker and speckly. Don’t be alarmed they’ll be delicious. This version photographed used butter beans, a closer match to what the original recipe suggested (cannellini beans) than the black-eyed peas I used on a whim.  Sweet potato and black-eyed peas are actually delicious. Who knew?

This “recipe” is more of a veggie burger guideline, in case you’ve never made them before. This is a very basic, easy, tasty, hard-to-screw up recipe, in my opinion. The single most important factor to remember is to make your patties small, because these are prone to falling apart. Smaller = easier to handle and faster to cook. But like pancakes, you want to cook them fairly medium for a medium amount of time. High heat will scorch the outsides while leaving the middle raw while low heat will take forever.

Also, don’t over-salt these. (Or anything, really.)

I’m officially obsessed. These are so nutrient-packed and filling. The next time I make veggie burgers, I want to add any and all of these ingredients:

Heat a teaspoon or two of olive oil over medium heat in a medium saucepan. Add the onion and cook until brown, translucent and soft, stirring occasionally (about seven minutes). While onion is cooking, mash together the sweet potato and peas/beans with a fork until slightly chunky, but with most of the peas smashed to oblivion. Crush the almonds into shards with your fingers, and add the almonds, corn, peas, flax, onion, flour and combine. Season with salt, pepper, garlic powder and parsley to taste. Form into palm-sized (~3 to 4″) patties with your hands.

Heat another teaspoon or two of olive oil over medium heat. When oil is hot (but not smoking, that’s bad), add two or three patties at a time and cook until golden brown and crispy on the bottom, about three minutes, depending on the size of your patty. Flip and cook until browned on the other side.