Sarah B. of My New Roots says every bite of her chocolate cherry cookies caused her to “run around [her] kitchen in tiny circles, like a short-circuiting robot on flavour overdrive.” That’s kind of how I feel about these. Except my version went more along the lines of shoving a sticky glob of delicious in my roommate’s face like a crazy, shouting “TRY THIS!”

No oven. Five basic ingredients. Huge, intense flavor. These are amazing. They were a reward to myself because guess what! I did it! I lived through this past week without ingesting one speck of added refined sugar!*

It’s been weird. A week without banana bread, spoons of ice cream, halves torn from cookies straight from the oven. I made it a week, and I feel slightly cleaner. (I suppose it helps that I’ve also been trying to eat clean. We’re talking lentil, carrot and quinoa soup and quinoa cornbread galore.) 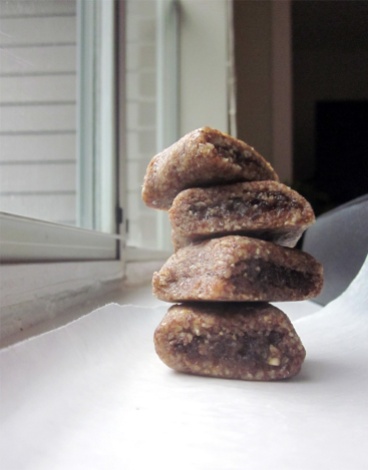 The weird thing is that it wasn’t NEARLY as hard as I expected. I curbed a lot of my cravings with homemade Larabars and PB&J crackers, and I started eating oranges from my santa-sized sack after dinner instead of my normal dive into whatever container of sweets are lying around.

I found these while browsing through Rawified after oogling her miles-long list of homemade Larabar flavors. I just couldn’t squash my urge to bake cook make something, so I got out my food processor… 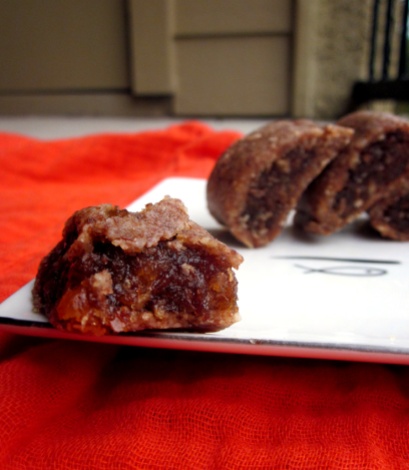 …and five minutes later, was banging down my roommate’s door. These aren’t your traditional fig newtons (which, actually, both my roommate and I admitted we don’t even really like!)—they’re sticky with honey and chewy from ground oats, oozing with a gooey, vanilla-scented date paste. The “cookie” part is incredibly rich with oil-abundant almonds and flax seed and they’re just the best cookie I’ve made all year. But really.

* Well, except for Sunday, when Erik suddenly decided we should have date night and the quirky-chic Italian restaurant gave us free pizza in the bread basket and two plates of biscotti for dessert. Naturally, I ate six. Bite-sized! Biscotti aren’t even that sweet, amirite? And they were free, so like, it doesn’t even count.

And half a bite-sized biscotti last night. But I was up past 12, way past my week night bedtime, and I can’t be blamed for my bad decisions.

Tips: My food processor is kind of dinky and not super strong, so my date paste was on the chunky side. You can make it chunkier or smoother depending on your preference—as long as it’s spreadable.

Substitutions: I used dates instead of figs (hence the “date newton”) and liked the result a lot–feel free to use either. I used unsalted roasted almonds, but you could probably use salted almonds and omit the salt. I used instant oats and flax seed meal, but the original recipe called for raw rolled oats and flax seed. Either will work. If you want to add a dash of cinnamon to the dough, I think that would go over quite well.

Nutrition: Here’s the calorie breakdown (You can try this recipe calculator if you want stats on fat, carbs, protein, etc. but it can be inaccurate. All calorie calculations below were calculated using the nutrition facts on the labels.)

So one newton bite = ~60 calories. Put that in your newton and eat it!

Best Macaroni and Cheese Bake Off