In lieu of pancakes, I bring you something else breakfasty! 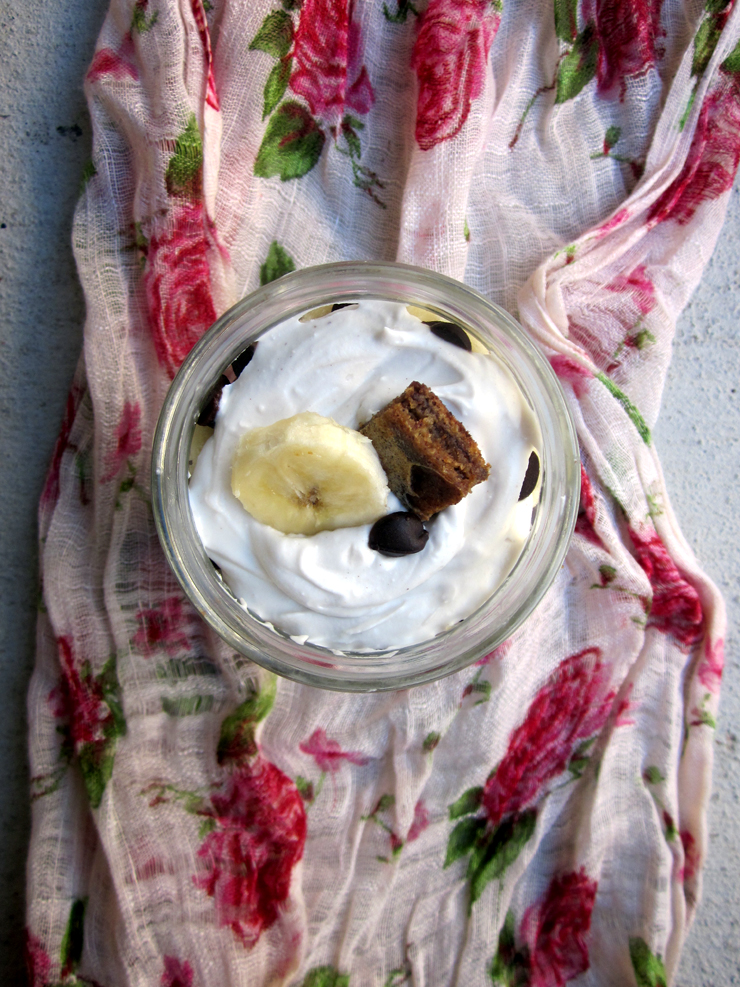 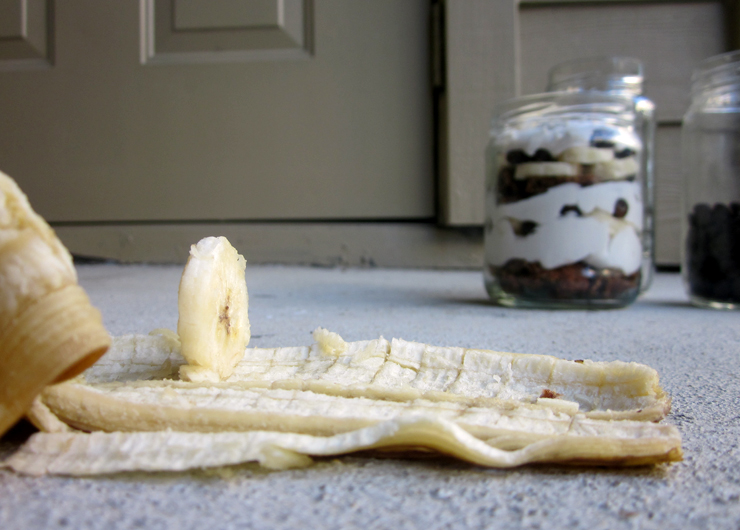 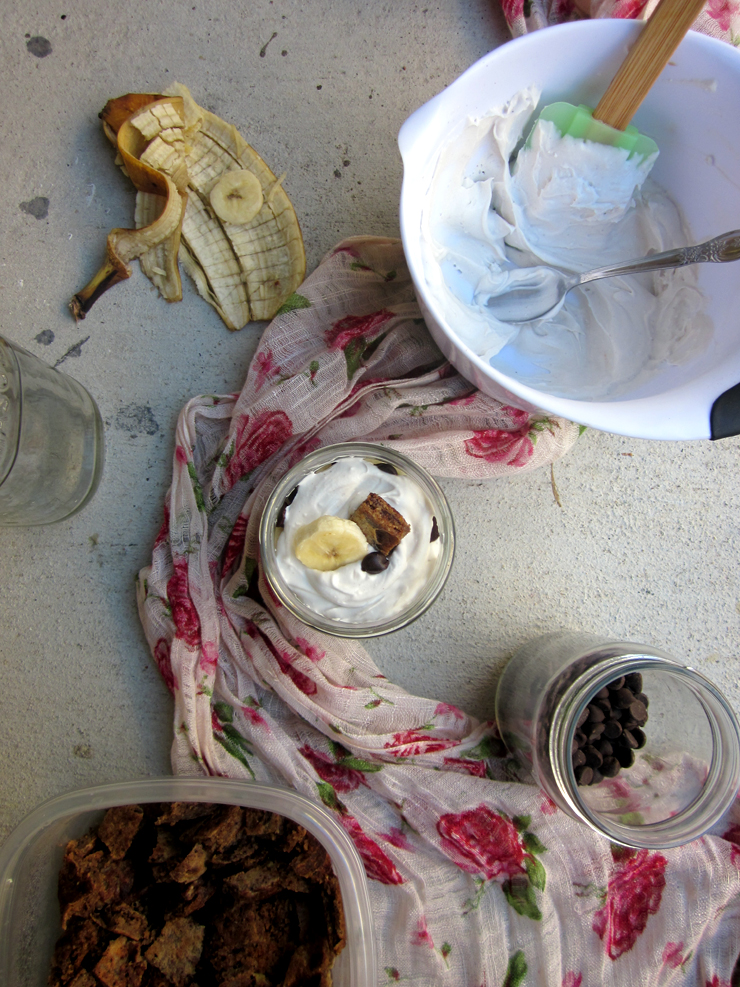 …this isn’t my first banana bread French toast rodeo, but this time, unfortunately, I used the most tender, crumbliest vegan banana bread recipe known to man and half of my egg-sogged, meant-to-be-French-toasted layers instantly crumbled. 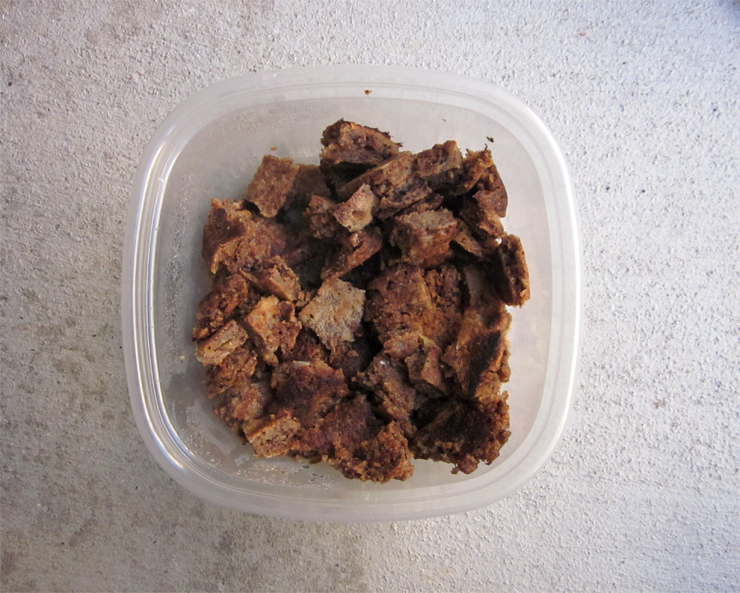 So then I was like “ugh” freak out *huff huff* wring hands “ugh!” *roll eyes*smash bread with spatula before I was like duh! 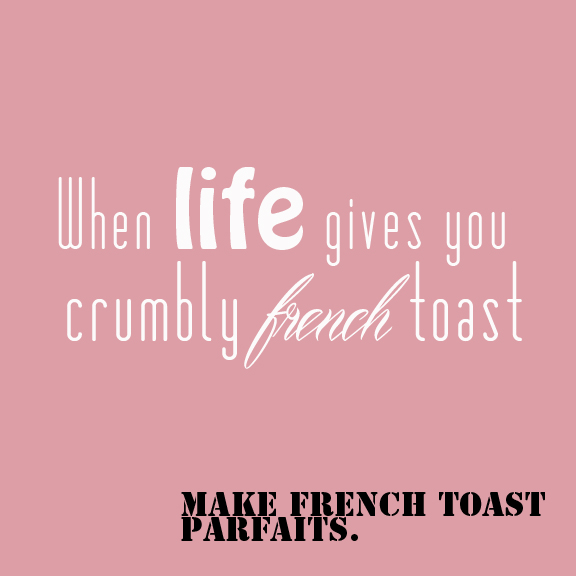 Are you picking up what I’m putting down? 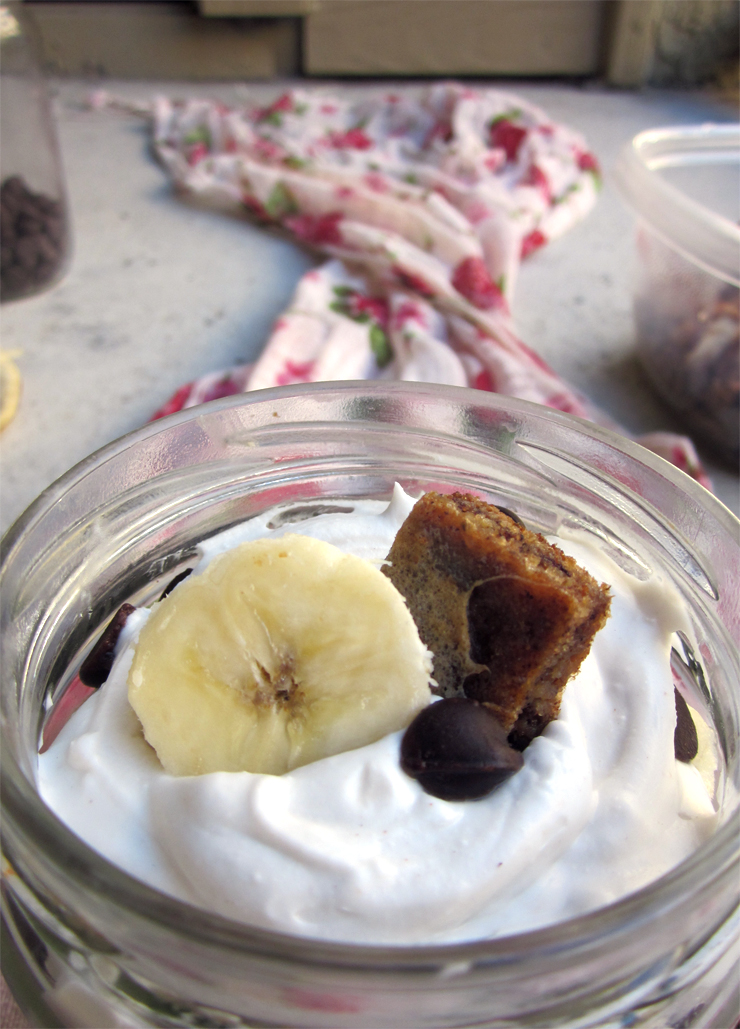 French toast banana bread was instantly chunked, layered with cinnamon coconut cream, sliced bananas and chocolate chips and a way-too-involved parfait was born. Or would this be trifle? According to google, this is perhaps not a trifle because there is no custard. Just cake, cream and fruit. 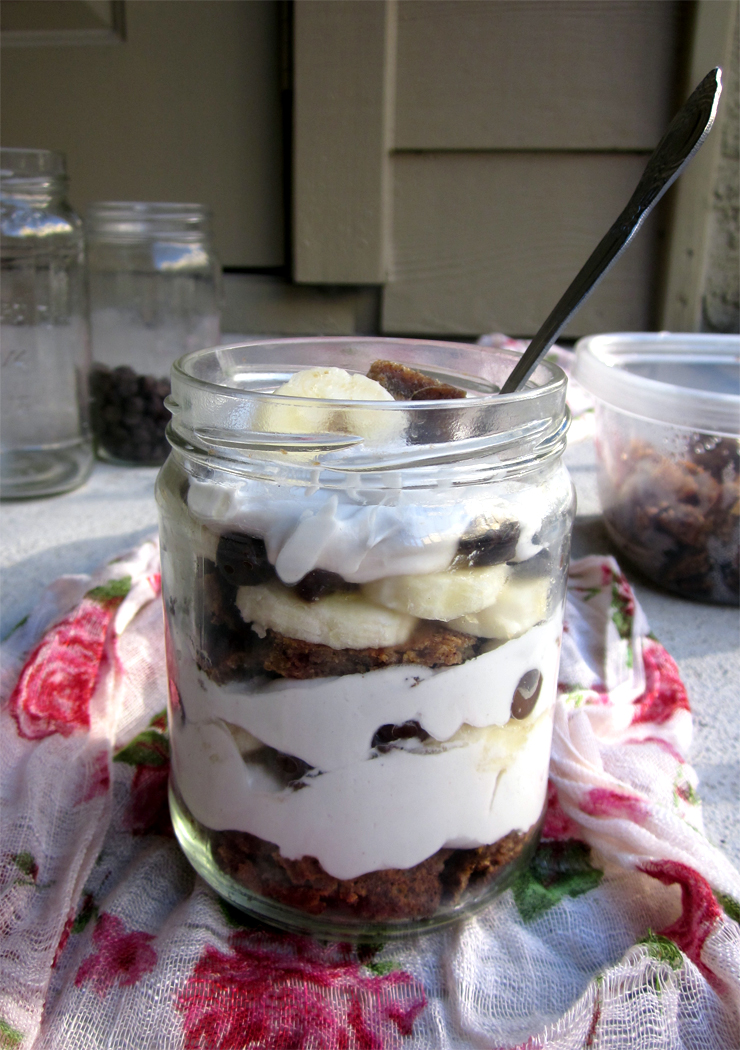 Good ‘nuff for me. 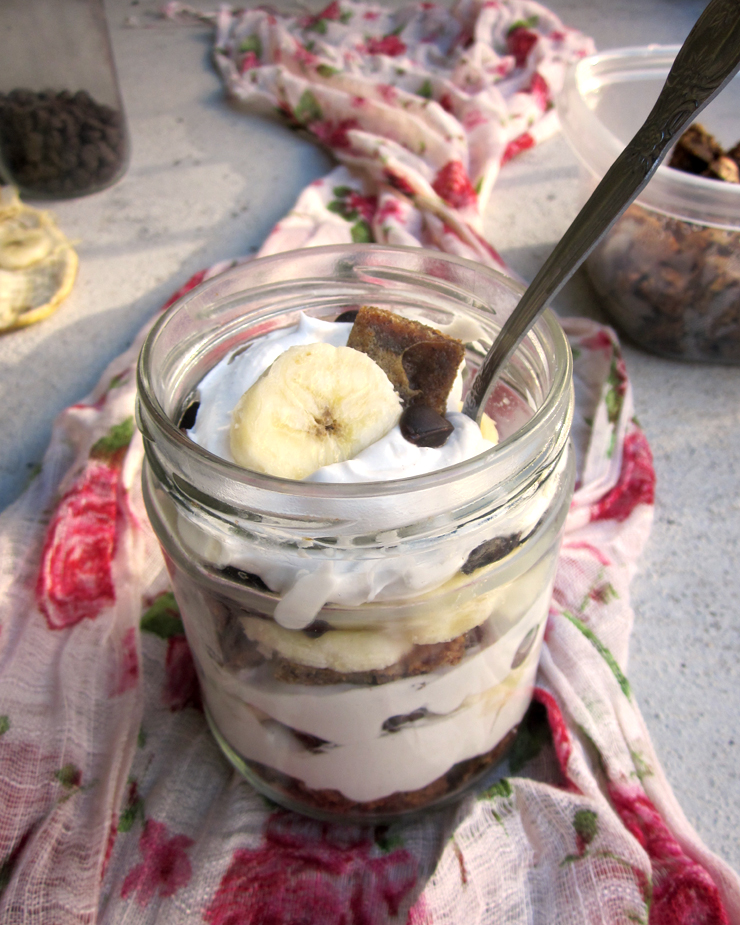 For the sake of ease, I could recommend that you use a sturdier banana bread that won’t fall apart during the French toast process, like this one. But truthfully, this vegan banana bread recipe from Babycakes is so amazingly plush and spiced (no, that tablespoon of vanilla is not a typo) and just all around delicious that I really hope you make it despite its nightmarish reaction to French toast batter. These parfaits could be just as good with simple cubes of banana bread. 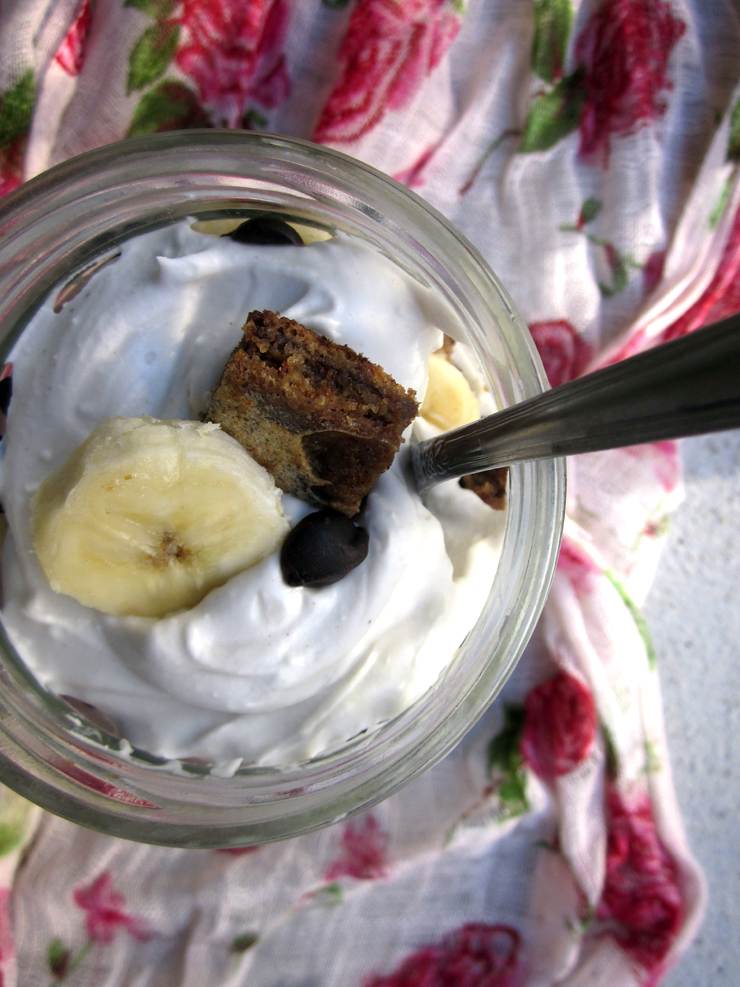 You don’t even have to make the parfaits if you just make the banana bread. But seriously, these parfaits are perfect spring party food. Something about blooming flowers and towering sunshine just screams a need for piles of cool, sweet cream over lush cake chunks studded with chocolate chips and banans, no? 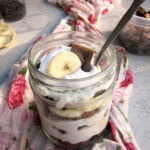 This vegan banana bread is incredibly sweet and moist. One of the best I've made!

*The original Babycakes recipe called for 1.5 cups of Bob's Red Mill gluten-free flour, specifically. I used half whole spelt flour and half oat flour (ground from rolled oats), but use gluten-free flour if necessary, obviously. I also subbed chia seeds for xantham gum and maple syrup for the agave, with delicious results. I don't think the chia seeds make a big difference if you want to leave them out, though. I originally baked the banana bread in a cookie sheet in order to make flat cake layers of French toast. This method will take much less baking time, but you will end up with thin layers that crumble easily if you try to make French toast with them. As an alternative, you can bake the banana bread in a loaf pan, which will take longer, but yield thicker slices that may stand up better to being dipped and fried.