Last summer, right around this time, I made an icebox cake. It’s icebox cake season! 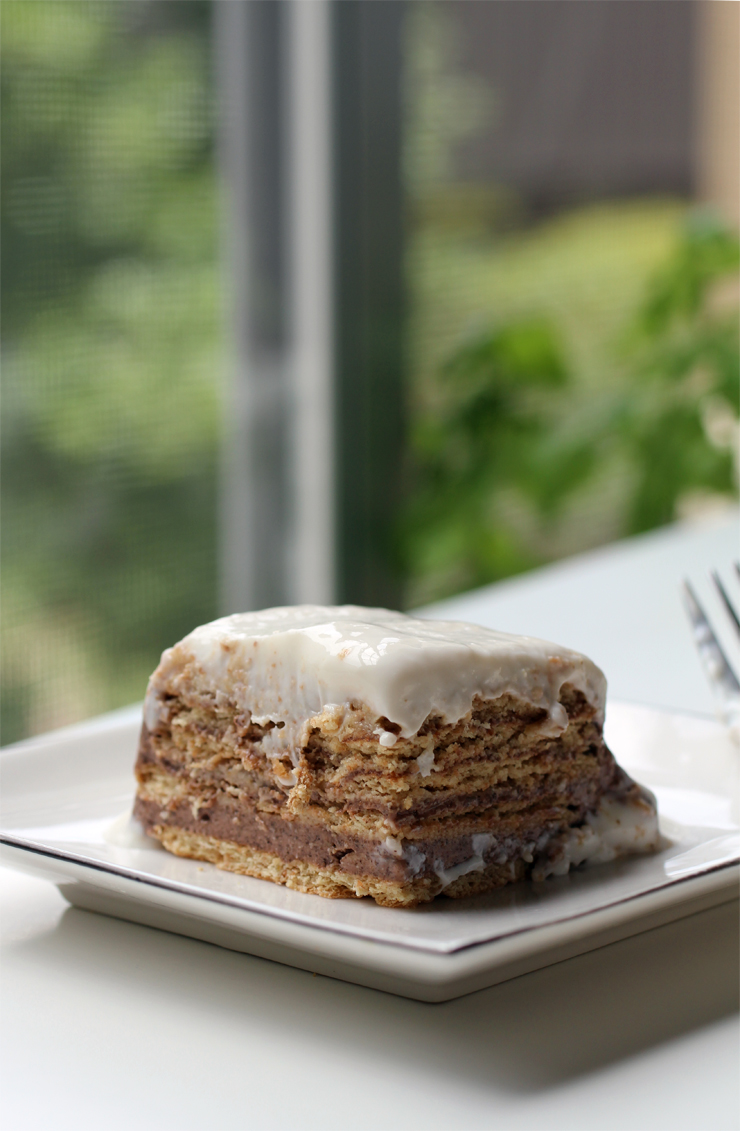 Along with stovetop recipes, cakes that you can assemble and stick in the freezer are popular in my kitchen right now. Last year, I adapted this funfetti one—it was totally delicious. I used two cans of those aerosol whipped cream cans. Also cake mix, cornstarch and sugar. I think I thought it was healthy because the pudding was mostly milk, with not a ton of sugar. 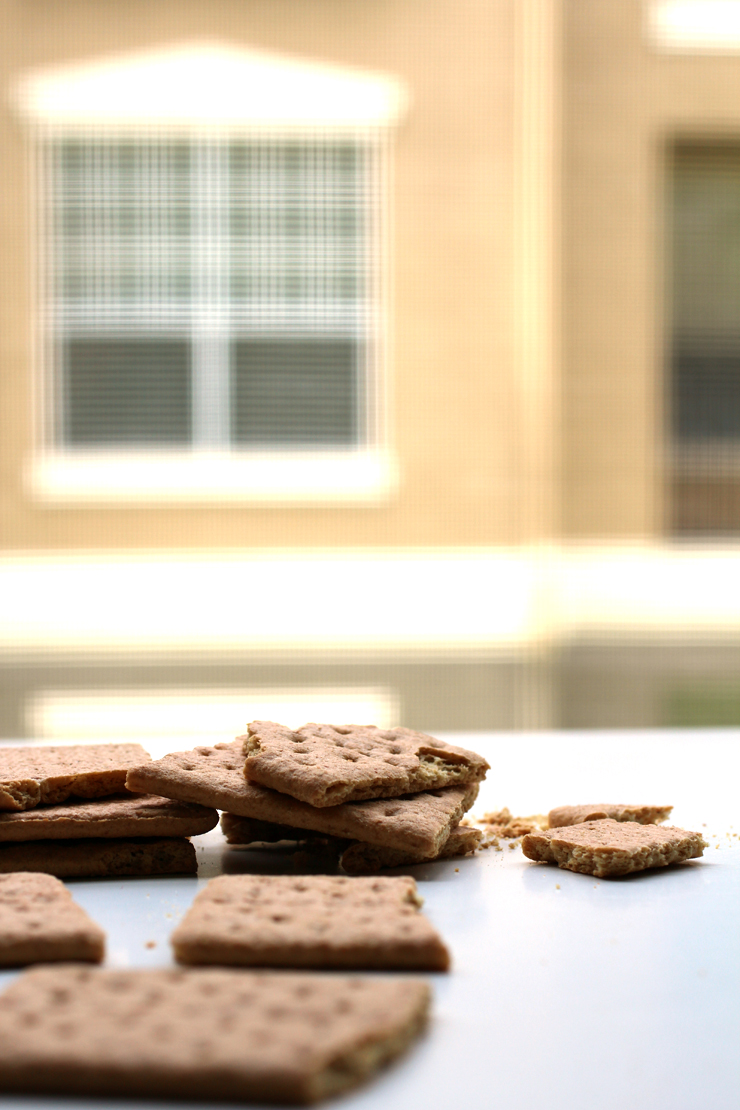 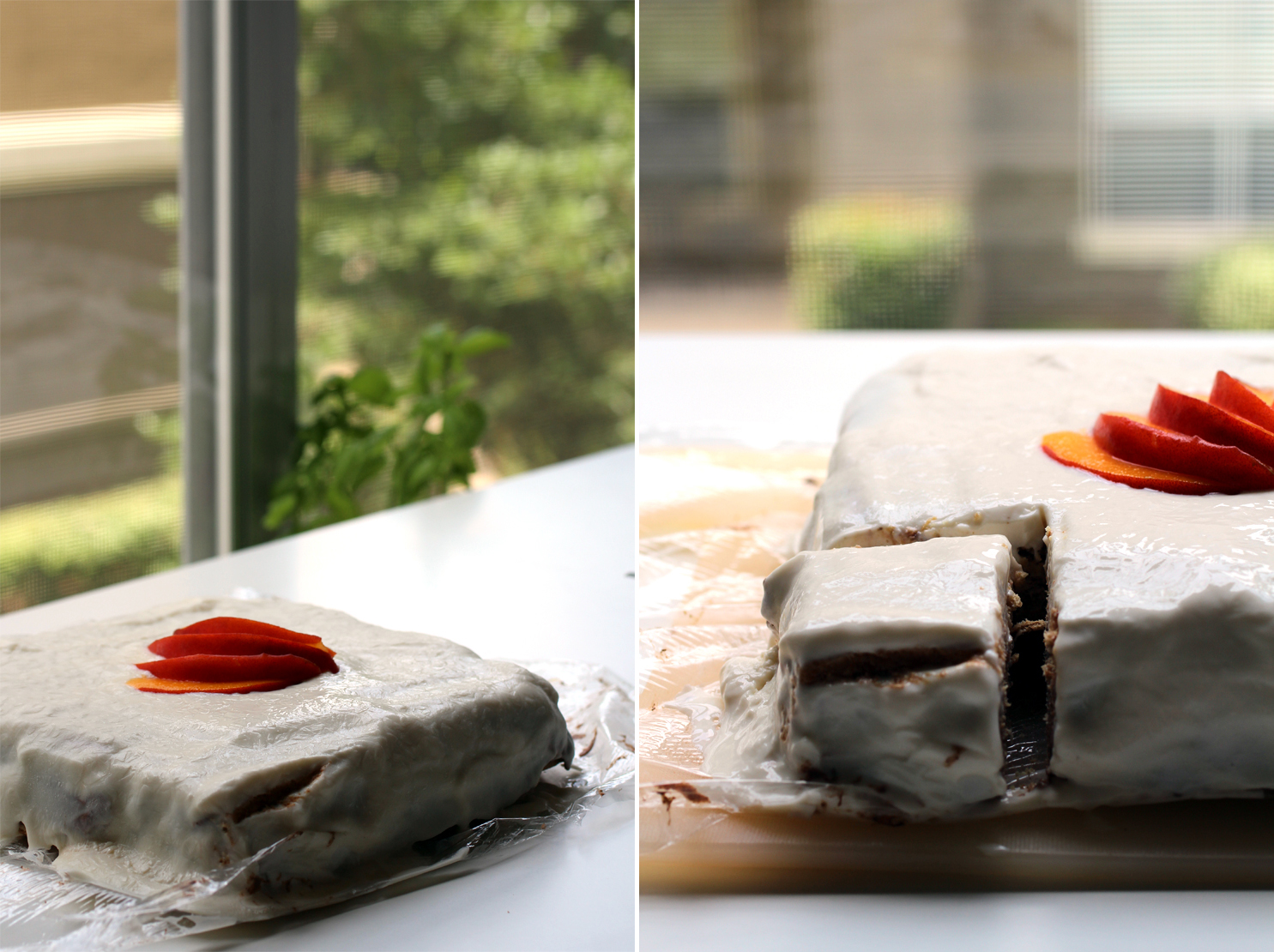 I don’t think I knew what an icebox cake was before before I saw this. It’s traditionally a cake made with whipped cream and chocolate wafers, stacked and left overnight to soften the wafers to a cake-like consistency. This version layers chocolate pudding and graham crackers, frosted with Greek yogurt. It’s not traditional, but I am a big fan. 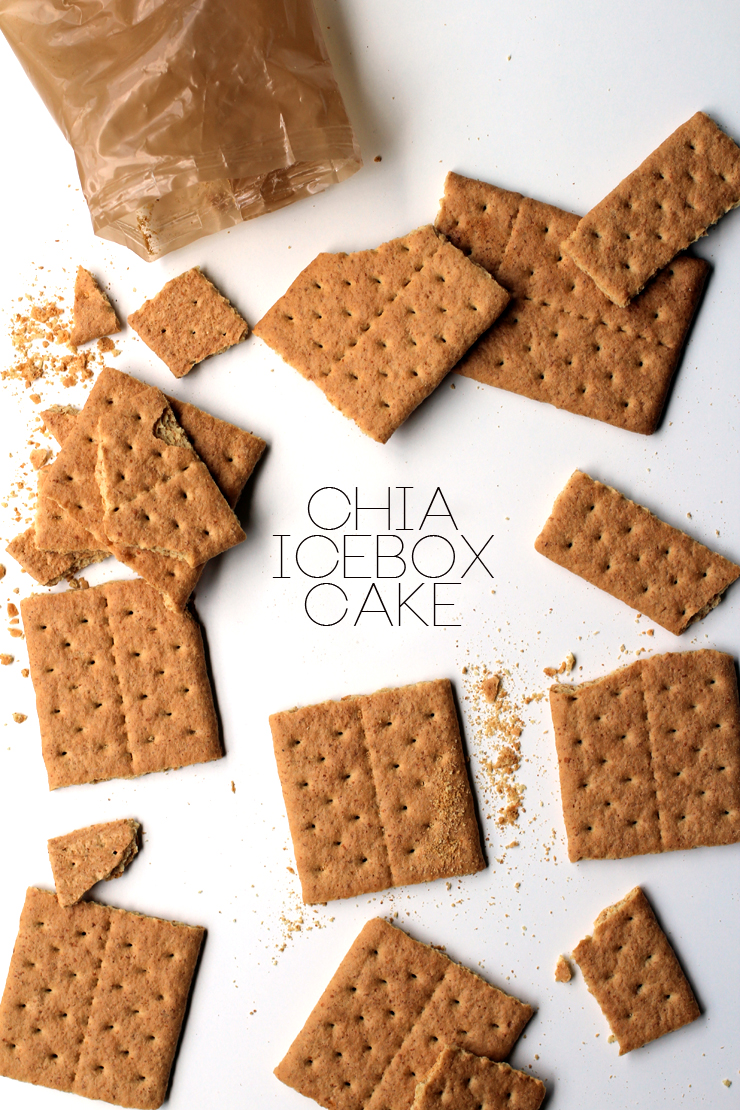 First, there’s the pudding, adapted from this deliciousness. It uses chia seeds as a thickener instead of cornstarch or funky thickeners. Chia seeds, which greatly resemble poppyseeds, are (1) way more nutritious (great source of fiber, omega-3 fatty acids and protein) and (2) often used as an egg substitute in vegan baking since they have this wild ability to absorb water and create a gel-like texture (I use one tablespoon to every three tablespoons of water, but ratios can differ). So once you create that gel texture and blend it up, you have an amazingly healthy pudding! 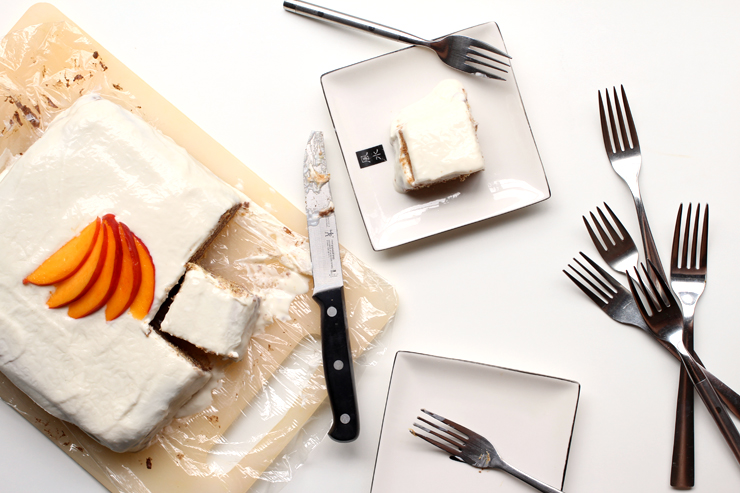 Then, there’s the easiest frosting you’ll ever make: maple-sweetened Greek yogurt. The kind folks at Chobani sent me some yogurt to play around with–to the tune of a heavy box the size of two of my torsos containing SIX TUBS of yogurt. SIX TUBS! I used some of the lusciously thick 2% plain tub to make this heavenly, healthy frosting. Seriously delicious.

The only thorn in my side is the graham crackers. Baking some type of healthy wafer would totally defeat the purpose of a no-bake cake, and I couldn’t exactly send Erik on a mission to find a healthy, minimally processed wafer/cracker at Kroger while I was up to my elbows in chia pudding. If you have any ideas for a better cracker, let me know in the comments!

If all goes well, by the time you read my next post (about pie and pancakes, but not IN pancakes), I’ll be sun-basking on an LA beach. 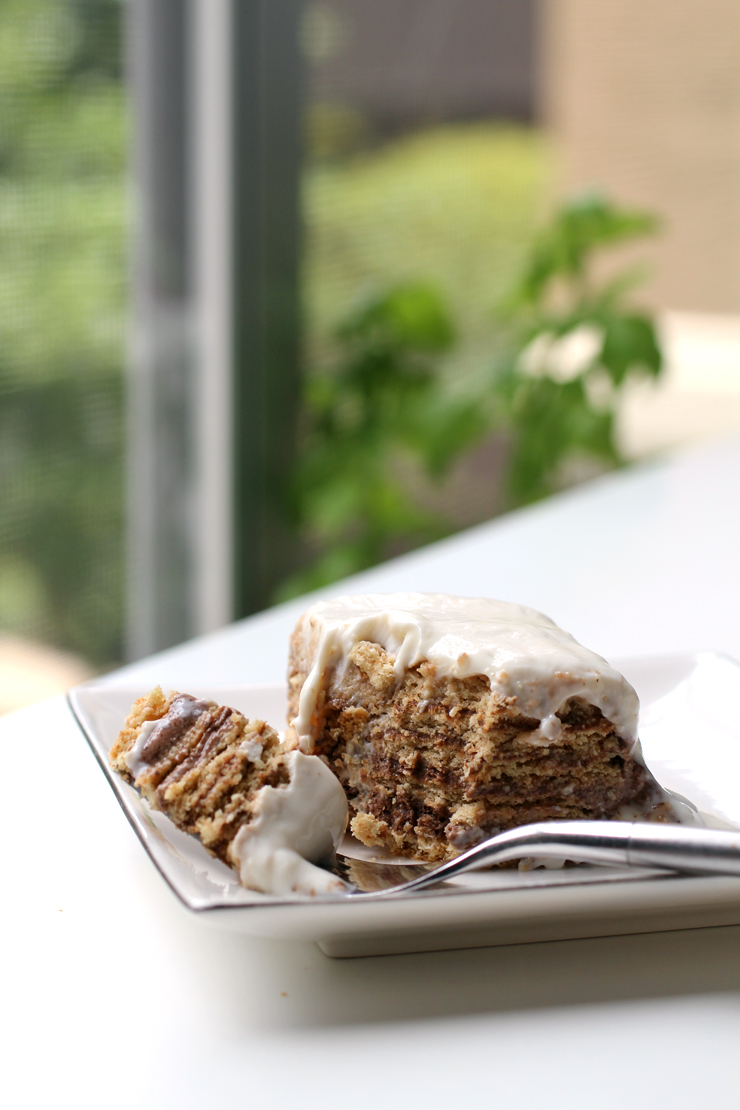 Vacation! Eep. Let’s get down to cake!

PS. I just dragged Erik to a concert by these guys. Swooooon. #dorkalert

Boyfriend rating: 8
Comments: “Very good! [In response to my query:] Yes, it tastes healthy, but in a good way. Great combination of everything–I can’t believe how good the frosting is, since it’s mostly yogurt.” 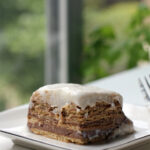 I originally used 1.5 cups of almond milk in the chia pudding, but I would suggest using 2 cups (as written) purely for more volume since I think thicker layers of pudding could only benefit this cake. I also found myself wishing for more frosting. Next time around, I might try doubling the "frosting" recipe and layering that inside the cake alongside the chia pudding. Adapted from here 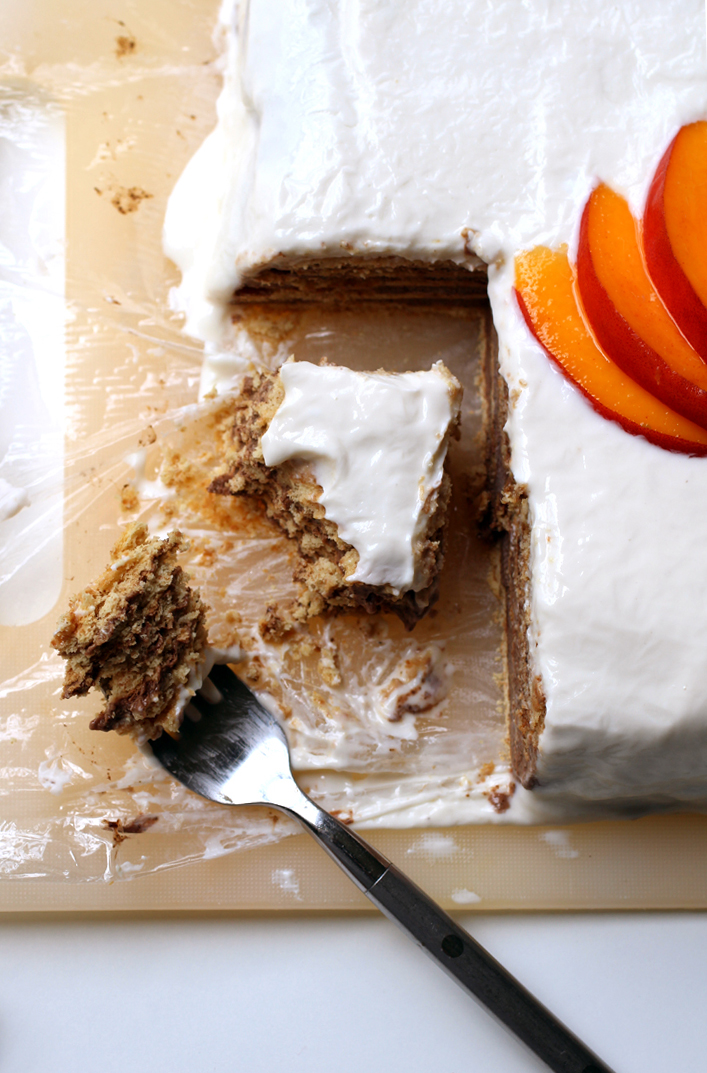