I’ve never been into the scary, the gory or the unnerving, so Halloween has never been my favorite holiday. But I can do dressing up and I can definitely do the massive sugar rush. 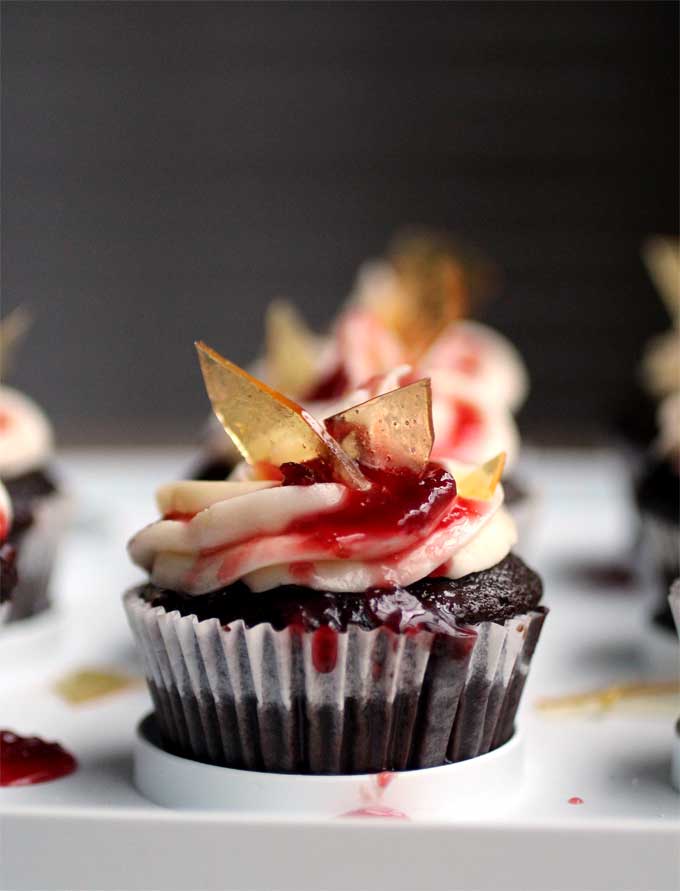 For our office decorating competition, my team went all out with an insane asylum theme and I brought in these broken glass cupcakes. They’re actually kind of a breeze to throw together (compared to the cake I just made, anyway) and I really liked the look of the sort of subtle creepiness instead of fingers or eyeballs or whatever sticking out of cupcakes. Gross. 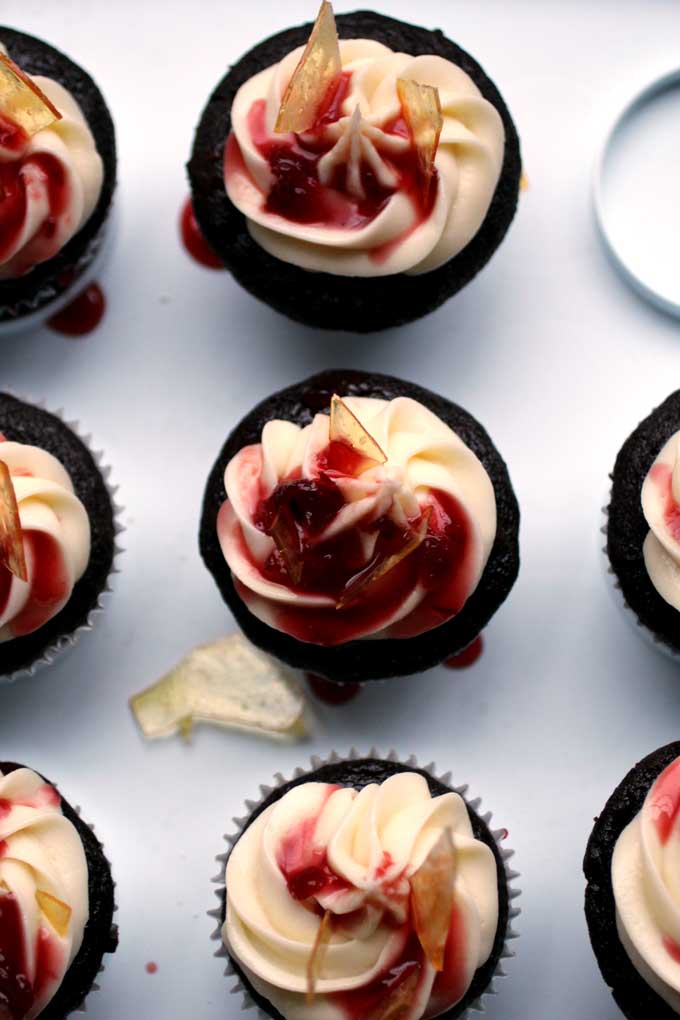 For the cupcakes, I doubled this 1-bowl chocolate cake recipe and added an egg for more sturdiness since I was also filling the cupcakes with jam to give an oozing effect when you bite into them. These cupcakes are quite moist and prone to sticking to the knife when you cut into them, but you’ll be covering them up with frosting even if the tops end up looking ugly after you fill them.

I overfilled some of the cupcakes and ended up with only 10 cupcakes, but you should be able to get 12 out of that recipe by filling the cupcake liners only halfway, which should yield nice domes for frosting.

For the frosting, I used a basic cream cheese frosting since I wanted one that would pipe reliably well, but I wasn’t a huge fan of the taste of this one. Use your favorite white frosting so that the “blood” shows up well.

For the broken glass, I followed the directions here, but used only 1/4 cup sugar and 2 tablespoons of water to make the amount of broken glass pictured. I think that would be plenty for 12 cupcakes given that it’s mainly for aesthetics–it tends to get stuck in your teeth so no need to go overboard with it.

For the blood, I thinned a sour cherry jam I had on hand with some water and drizzled it on top. A seedless raspberry or any red-colored jam would work well.

I also made some vegan pumpkin cupcakes that I wasn’t crazy about, so I used the rest of the cream cheese frosting to turn them into cake balls. 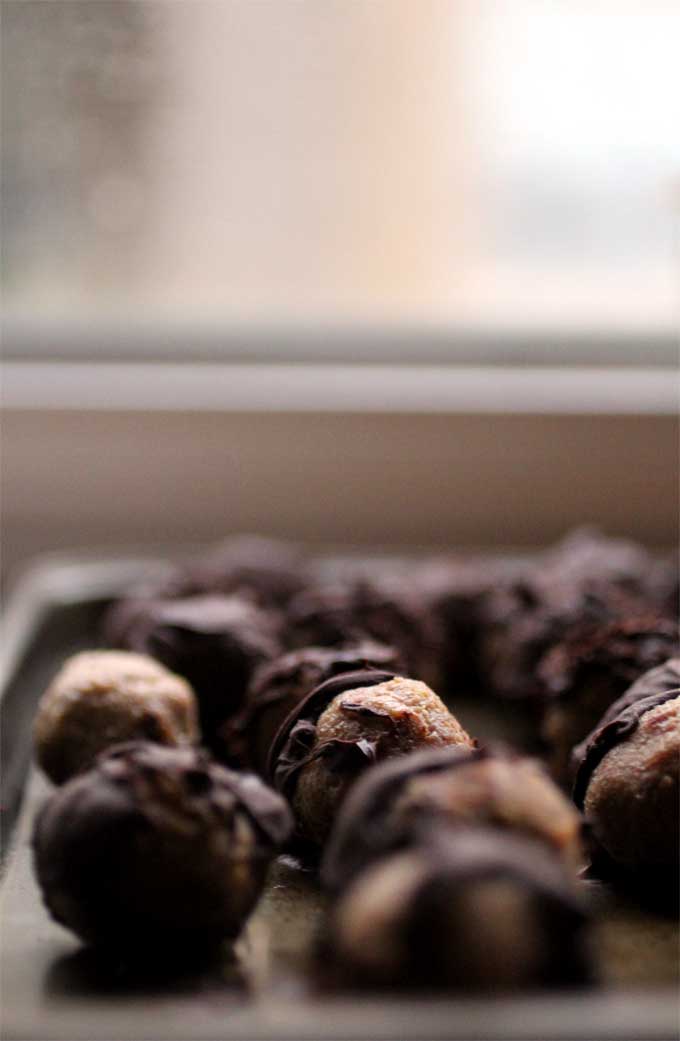 I dipped them at 7:30 a.m. this morning so perfection was not the name of the game. Plus, our theme was an insane asylum after all so if there was ever an occasion for messy cake balls, I think today was the day. 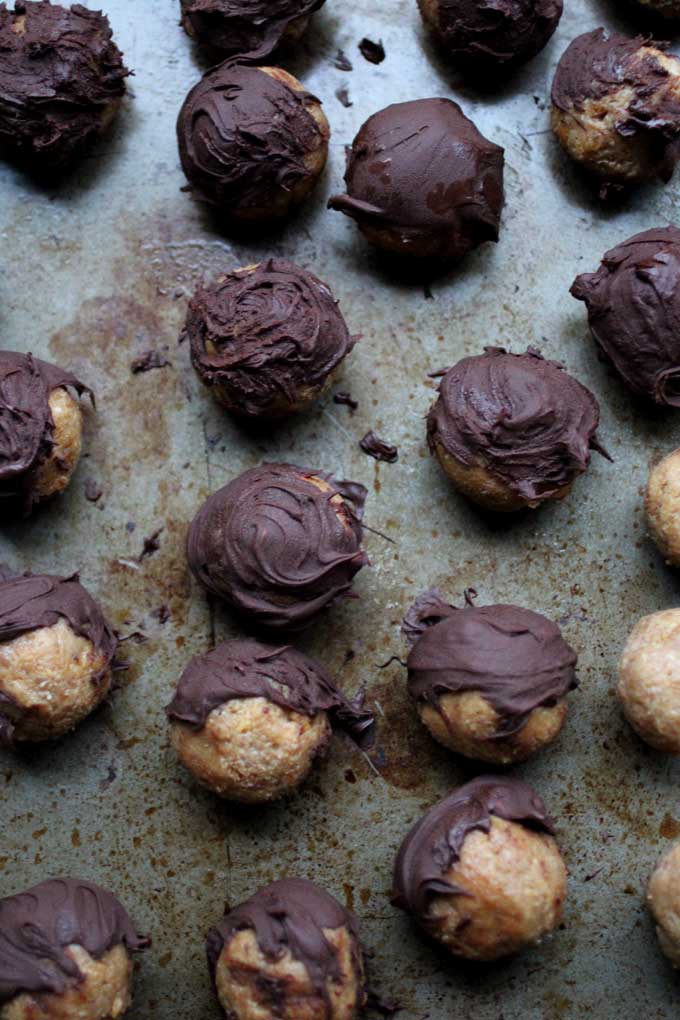 What are you doing for Halloween?

(In case you were curious: we won the decorating contest!) 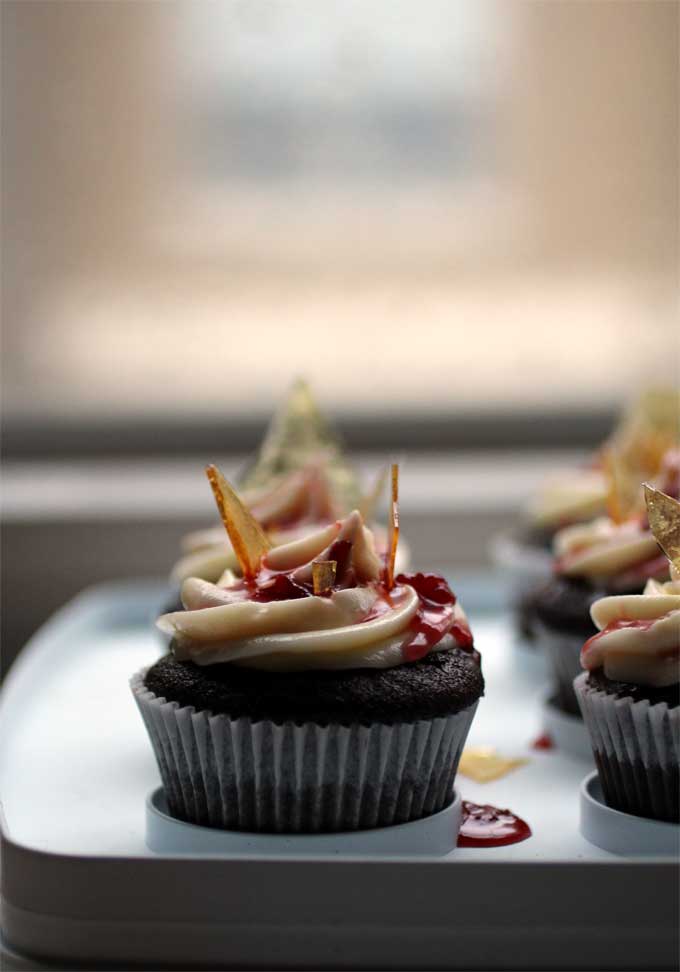