Omg. This is like the ultimate chocolate box. Of cupcakes. 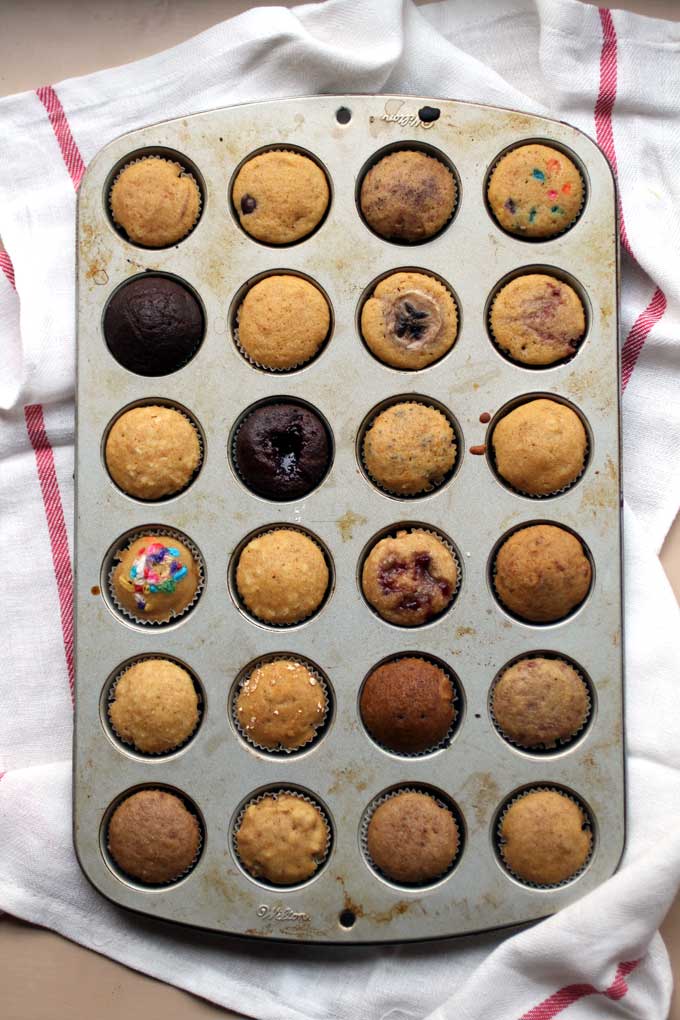 I pretty much don’t eat candy until the holidays roll around and boxes of chocolate start to trickle in. I am totally that person who, when handed a box of chocolates, would very much like to take a bite out of each one because

Taking bites, however, infuriates my siblings/grosses out my parents, so these days, out of politeness, I cut each potential sucker in half. Sometimes I still get complaints, but I kind of think I’m doing everyone a favor because who wants to bite into a coconut-filled chocolate when you wanted caramel? No one, that’s who. 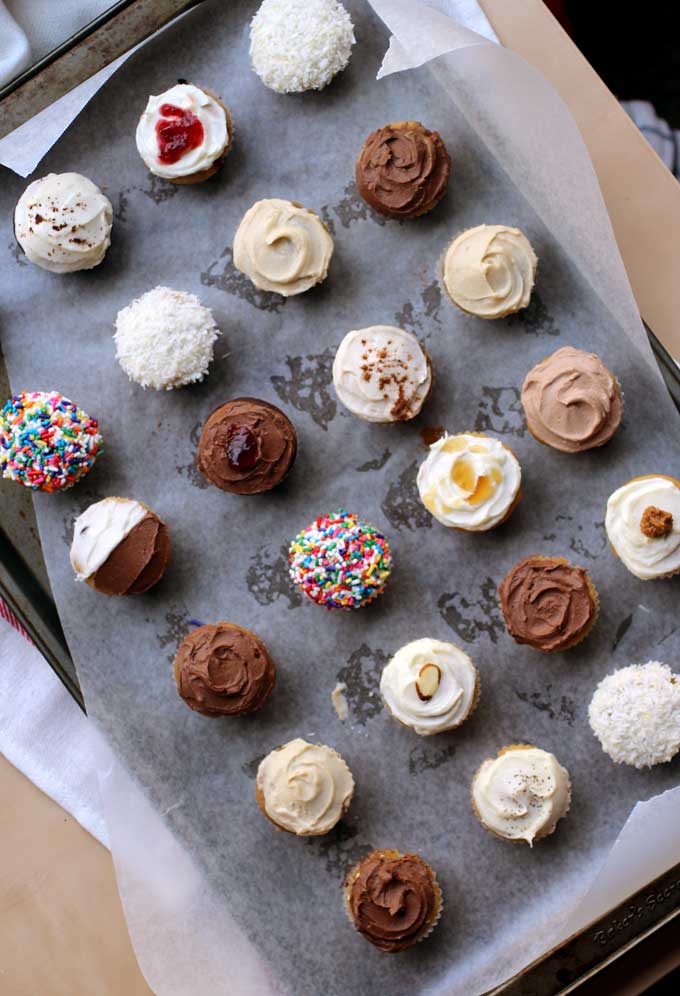 So cupcake mixology: I’m borrowing this term from A Beautiful Mess and applying it to this beauty of a technique. I’m obsessed. I’m afraid I’m never going back to normal cupcakes. Why did we ever make batches of 12, 24, 36 of the exact same cupcake and frost them with the exact same frosting when we could’ve frosted 20 different kind of cupcakes with 20 different frostings?? 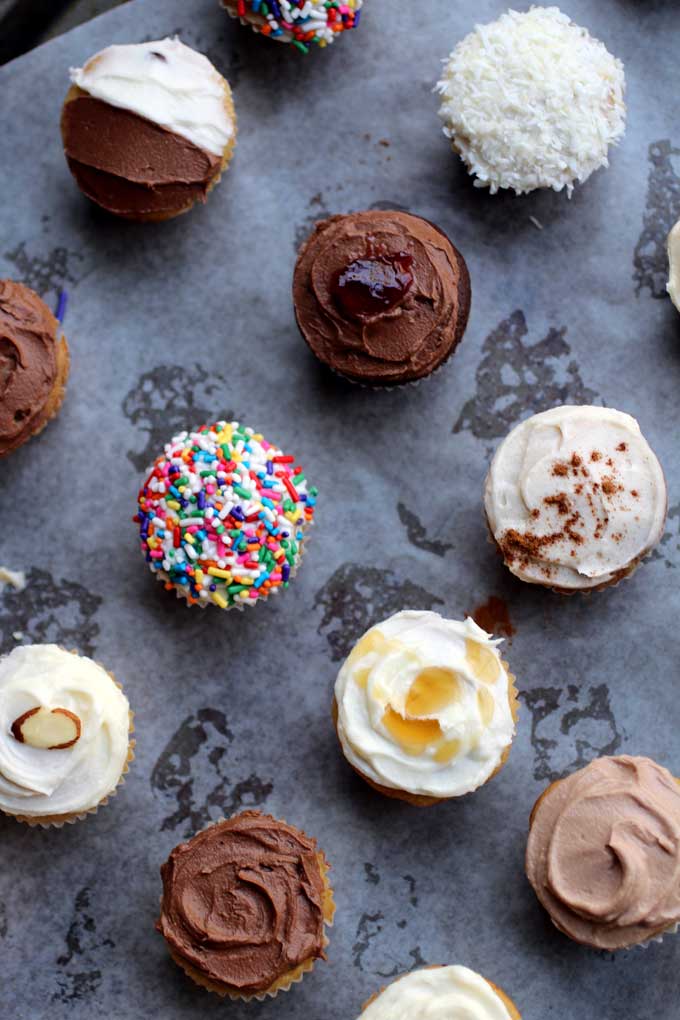 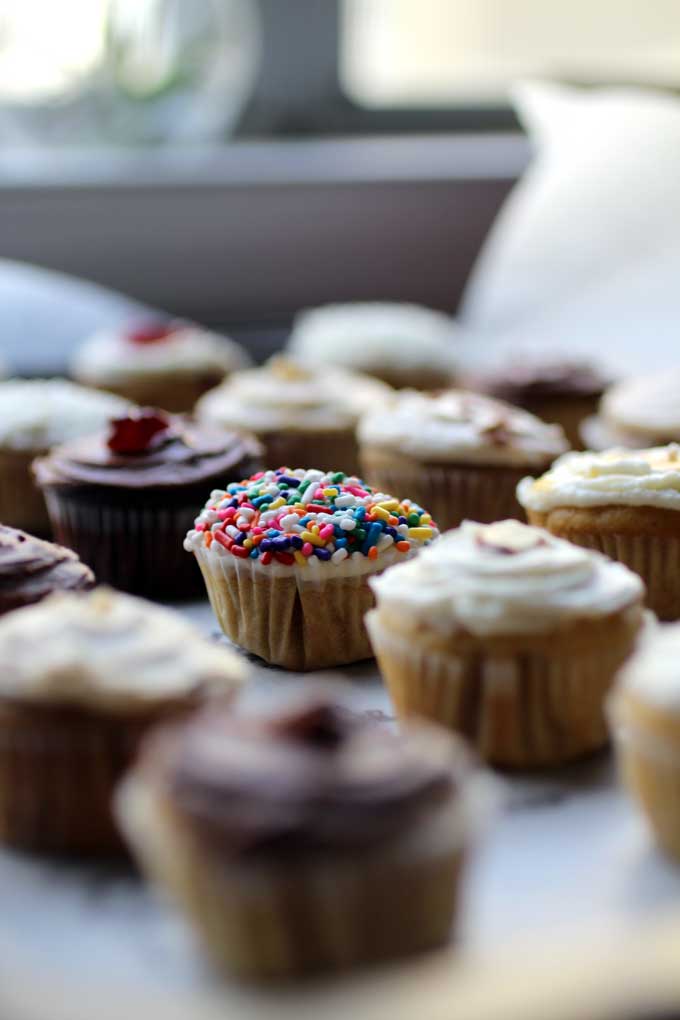 Oh right, because only an insane person would do that. But this is actually not thatttt much more work than say, baking a nice-looking layer cake. If I can mix and frost 30 cupcakes in different frostings before work, you can definitely pull this off. And armed with these, you’re guaranteed to be the most popular person of the next party you attend. 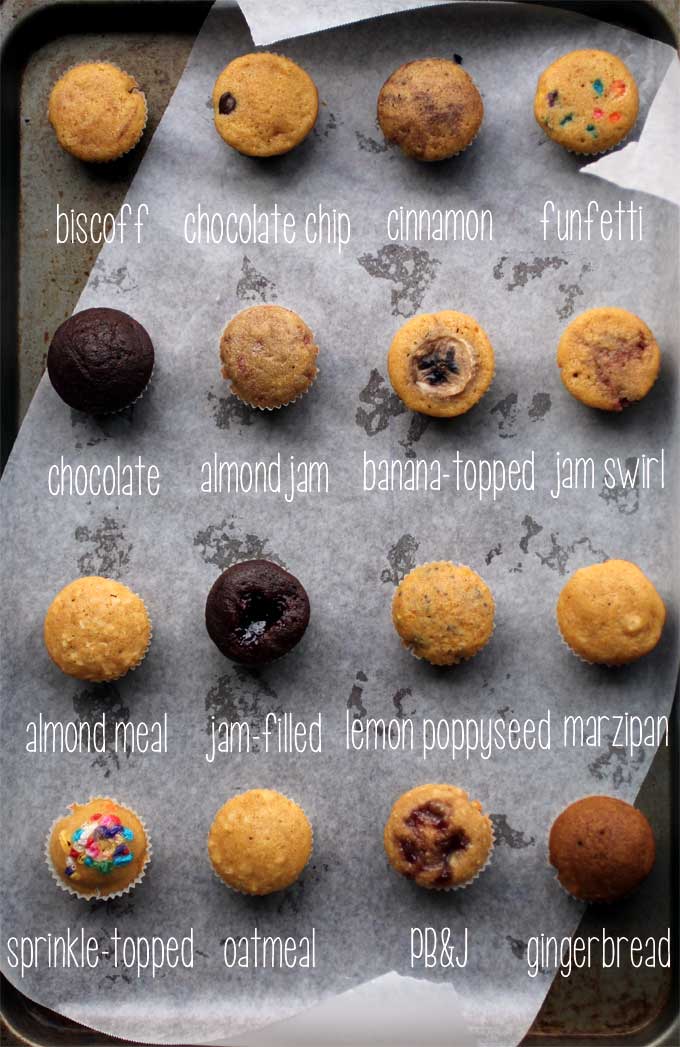 Mix up your favorite vanilla cupcake. I purposefully chose a very basic, 1-bowl vegan cupcake so that I wouldn’t have to deal with eggs, creaming butter, or a bunch of bowls because I knew adding all the mix-ins would be plenty of work. I adore this recipe because it’s delicious on its own, but also the perfect vanilla-scented blank canvas. The cupcakes rise to perfect domes and they are so tender and moist and dewy-crumbed that it’s hard to believe they’re so simple, let alone vegan. They’re pretty much my ideal vanilla cupcake.

Assemble your mix-ins. A.k.a every possible ingredient in your kitchen that you’d want to taste in/on a cupcake.

Mix your cupcakes. Use a separate, small bowl as your mix-in bowl. I used 1 tablespoon of batter per mini cupcake. I started with the cupcakes where the mix-in was simply sprinkled on top–sprinkle-topped, banana-topped and the jam swirl. Then I started stirring in the mix-ins. I built on some of the flavors–for example: I added two tablespoons of batter to the bowl, stirred in a dash of cinnamon and scooped out one tablespoon to make a cinnamon cupcake, then added a drip of molasses and tiny dashes of cloves, nutmeg and ginger to make a gingerbread cupcake.

Pro bakers would cringe at my process–I really just added a dash of this, a tiny scoop of that to each tablespoon of batter I doctored: you’re practicing the art of eyeballing. If–whoops–you dumped in what looks like way too much cocoa powder, add more batter. If I absolutely had to guesstimate, I’d say I probably used about 1/16-1/4 teaspoon of mix-in per cupcake, depending on the ingredient.

Bake the cupcakes. Only 11 minutes for these beauties. Yeee.

Mix the frostings and frost. Once the cupcakes are baked, whip up a basic vanilla buttercream or your (preferably white) frosting of choice. I used several small bowls to dip the coconut- and sprinkle-covered cupcakes into, but for the most part I used one bowl to mix the rest of the frostings, simply wiping or rinsing the bowl out between batches and leaving the dark-colored cocoa powder and nut butter frostings until the end. (If people with allergies may be eating your cupcakes, you might want to be more vigilant about keeping your cupcakes uncontaminated.) 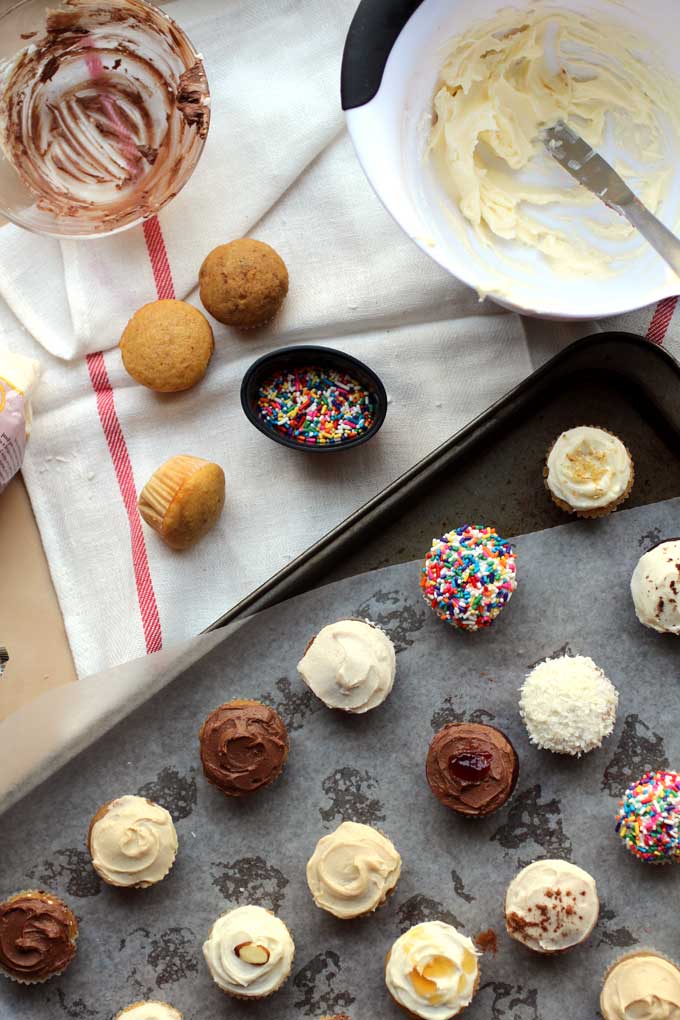 Here’s what I made in my batch: 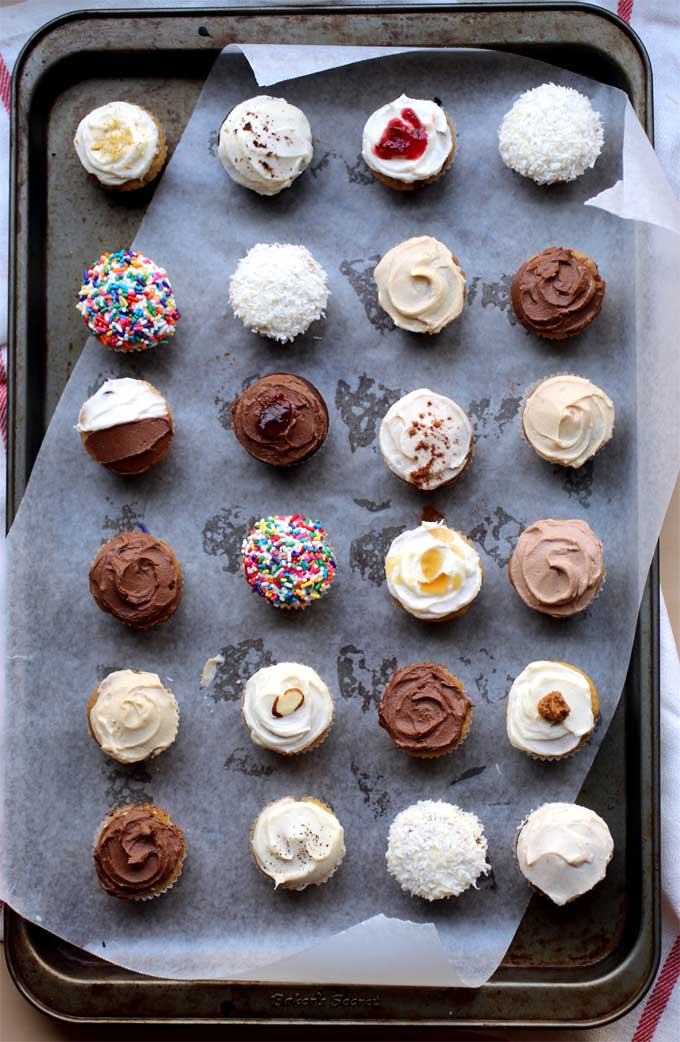 Starting with the top row, from left to right:

These make for a seriously showstopping tray. I can see so many occasions that be great for a little cupcake mixology: for someone’s birthday, for a party, for a bridal shower, or you could even host a cupcake mixology party! Because, um who WOULDN’T want to spend hours making a million different kinds of cupcakes?

The only problem with these is that you’ll want to eat all of them. 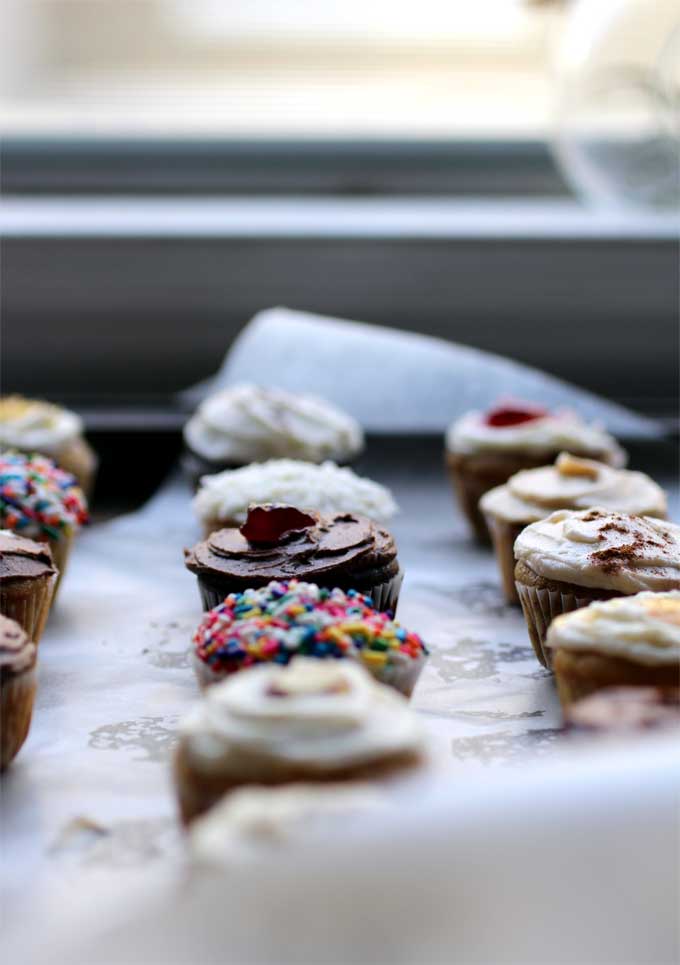 …to which I say, you only live once!

Mix-in ideas: I have endless ideas for cupcake mix-ins and I’m sure you do too. Here are some I came up with: 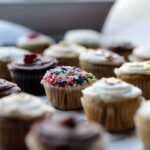 For more basic vegan goodness, try my favorite basic vegan pancakes (both these cupcakes and the pancakes are adapted from recipes by the ultimate vegan goddess): 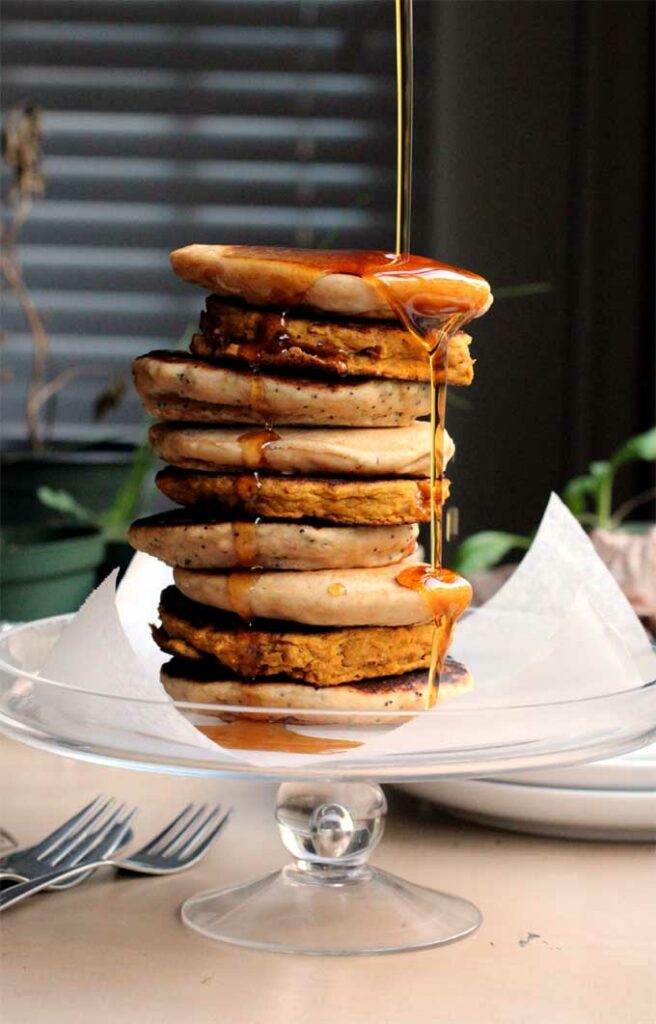