It’s not even Thanksgiving yet and I’m already posting what I’ve made?? I guess it’s a testament to how much people love Thanksgiving that I’ve already celebrated Thanksgiving twice with the real day still three days off.

My friend, roommate and I hosted a vegetarian Thanksgiving-themed potluck yesterday and I finally got a chance to make a bunch of mainstream Thanksgiving dishes that I rarely ate growing up. I love my family’s big annual Thanksgiving in L.A. with my mom’s relatives more than almost anything, but there’s something to be said for cooking half of your own Thanksgiving table (said the food control freak).

I spent a lot of time pouring over recipes before deciding on the ones I made, so I’m listing the dishes I made with notes, plus a bunch of extras that are on my list for next year: 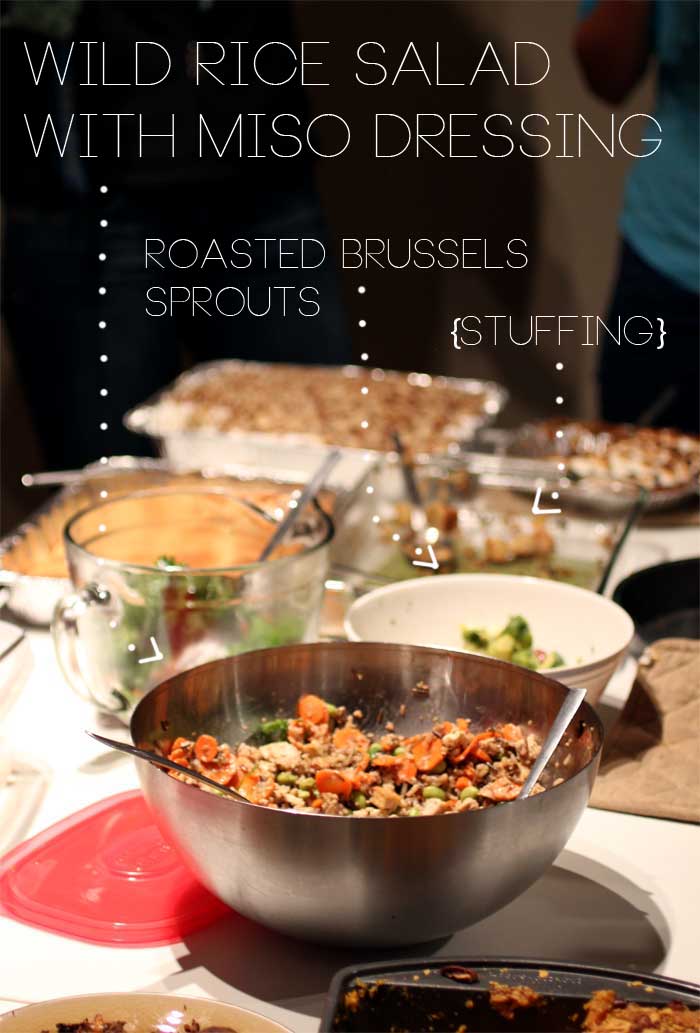 Wild rice salad with miso dressing: With four different components (rice, vegetables, tofu and dressing), this was meant to be the superstar of my contribution, but I actually wasn’t wow-ed by it as much as I expected to be. It’s delicious, but I wished the dressing were a little more citrusy (although I will blame bland oranges for that) OR a little more salty. As it was, it seemed oddly muted, but I loved all the components otherwise.

Oven-roasted brussels sprouts: Fresh brussels sprouts were pretty pricey, but I spotted frozen 1-lb. bags for $1.49 each! Cheaper, but also SO much easier than cleaning, chopping and wrestling three pounds of raw brussels sprouts. I just boiled them according to directions, tossed them with olive oil and parmesan cheese before baking for 10 minutes at 400. I added salt, pepper and dried cranberries before serving.

Next time, I would undercook the Brussels sprouts slightly during the boiling step and roast them for slightly longer. They turned out a little mushy, but throughout the night, I heard several people comment that they didn’t know Brussels sprouts could taste like this. (I assume they meant it in a good way.)

Classic stuffing: As soon as I saw this, I knew it was the one. Classic bread stuffing is my favorite, but my family almost never makes it. It’s rather time-consuming, but you can make it ahead and bake it right before. Just what I wanted, and probably the second thing gone at the party. 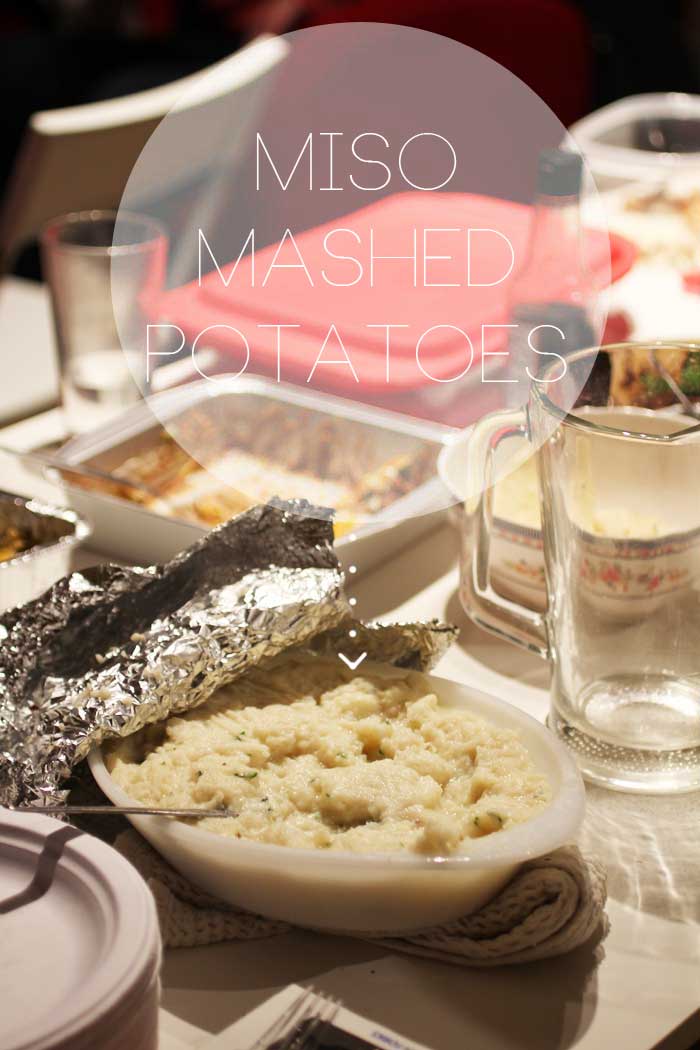 Miso mashed potatoes: I used 5 large russet potatoes and tried this steaming method instead of boiling the potatoes. The trick to mashing potatoes with a fork (as opposed to a fancy gadget) is to cook them until they’re nearly falling apart. (When I stabbed a potato at the end of the cooking time, it broke apart.)

I made these ahead of time (omitting the butter) and reheated them (some in the microwave, some in the oven, covered with foil) the day of. Next time, I’d probably just make them the day of as reheating them took almost as long as mashing them. The miso gave these a little extra salty oomph that you can’t really identify, but they were really good. 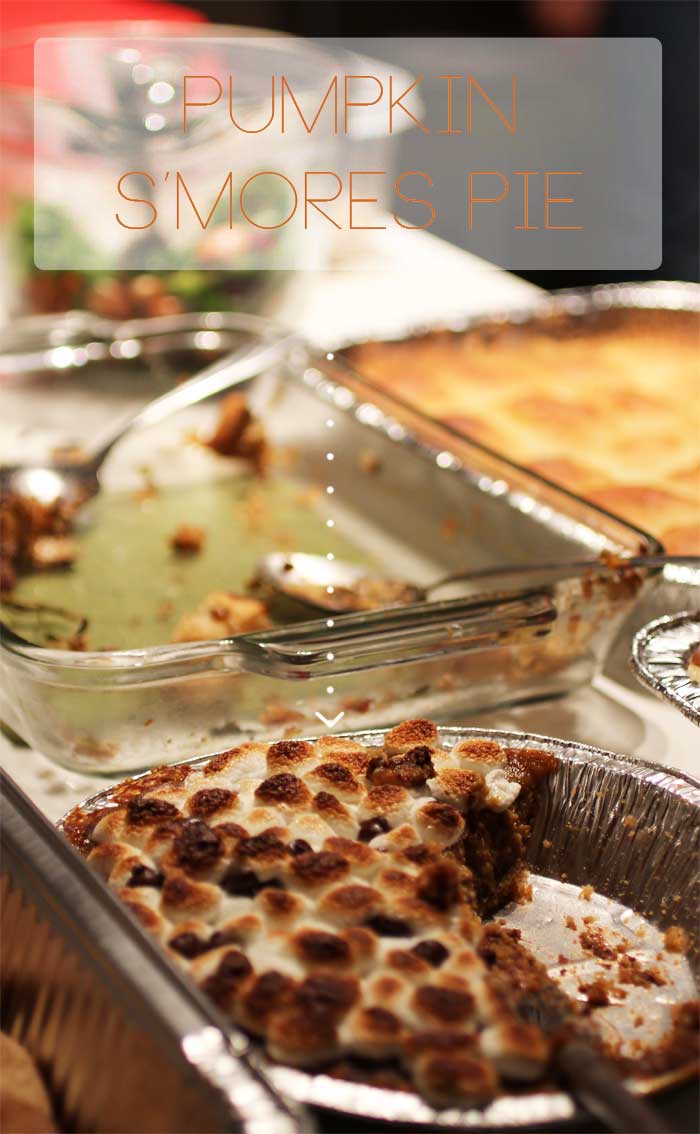 Pumpkin s’mores pie: I baked up a quick graham cracker crust, topped it with a handful of chocolate chips and tossed it back in the oven to melt them. Pumpkin pie filling went in the middle to bake and then right before serving, I scattered marshmallows and chocolate chips over the top and stuck it under the broiler for a minute (keep an eye on it to keep it from burning!). Although I missed the whole flaky pie crust thing, overall it was delicious–if you love chocolate and pumpkin, this one’s for you! 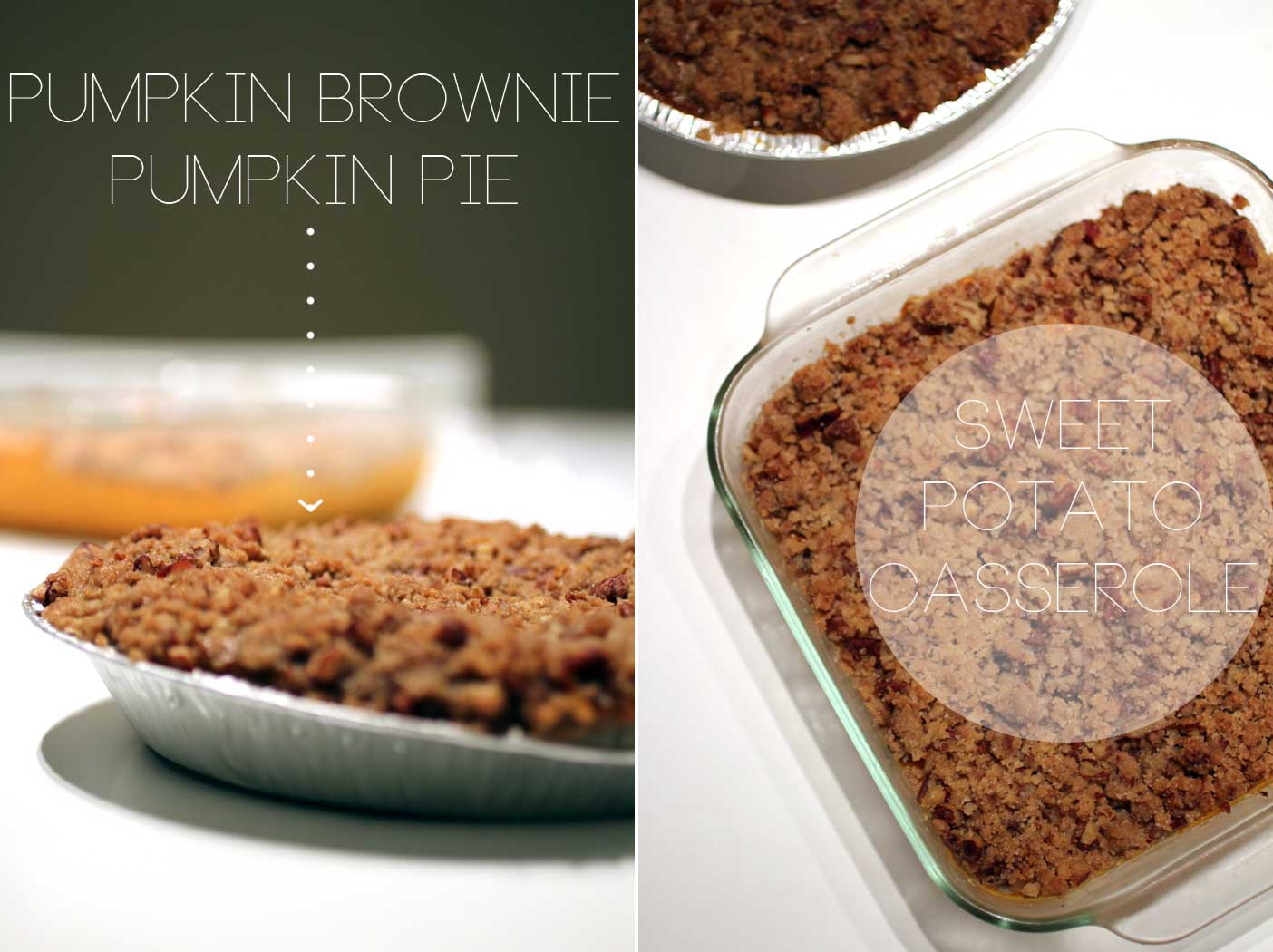 (For another Thanksgiving potluck Erik and I were invited to):

Sweet potato casserole: Although Lindsay recommends canned sweet potatoes, I could only find sweet potatoes in syrup at the store, so I just roasted fresh sweet potatoes. I cut down the butter to only(!) half a stick of butter in the filling and ½ cup sugar, and reduced the topping by about ¼. It was still DELICIOUS and a big hit. If you’re a crumble kind of person. My number one and only is still orange-citrusy mashed sweet potatoes with marshmallows. Swoon.

Pumpkin pie brownie with pecan topping: The term “brownie” is a bit misleading as the bottom is really more like cake. In the original recipe, melted bittersweet chocolate is added to the brownie layer, which undoubtedly makes it more brownie-like. The pumpkin layer is oddly thin compared to the “brownie” layer, but the pecan topping is so delicious, I don’t think anyone was complaining.

Vegetarian meatballs/meatloaf: I formed and cooked about 10 meatballs out of the mixture before I got fed up, certain I was cooking the meatballs wrong, and baked the rest of it in a loaf pan. Joke was on me, because the meatballs turned out much better than the slightly scorched baked portion. This was sooo tasty (my sister declared it delicious, but not meaty-tasting) but I would add way less soy sauce next time (maybe ¼ to 1/3 cup) because it was pretty salty. The tempeh really helps with the meaty texture. I was pretty wary of tempeh for a long time, but I’ve discovered I really like the tempeh at Trader Joes. Just don’t eat it plain, because tempeh never tastes good that way.

Honey balsamic roasted carrots: I nearly doubled this recipe had to bake these far longer than the directions said (maybe 40 minutes total), probably because my carrots were giant. They shrunk a lot, and I wish I’d roasted all 2.5 pounds of cut carrots I’d prepped instead of ~1.75 pounds. They were a pretty big hit (people thought they were sweet potatoes)–one of the first things gone at the party.

And now, a round-up of some amazing looking recipes that I still want to make:

Plus! More inspiration. I will be pinning Thanksgiving recipes probably until Christmas.

Lastly, a snippet of some of the gorgeous people that made the party (yes, I managed to not get a single photo of myself. Whoops.):

Don’t forget to make a galette with your leftover pie dough! 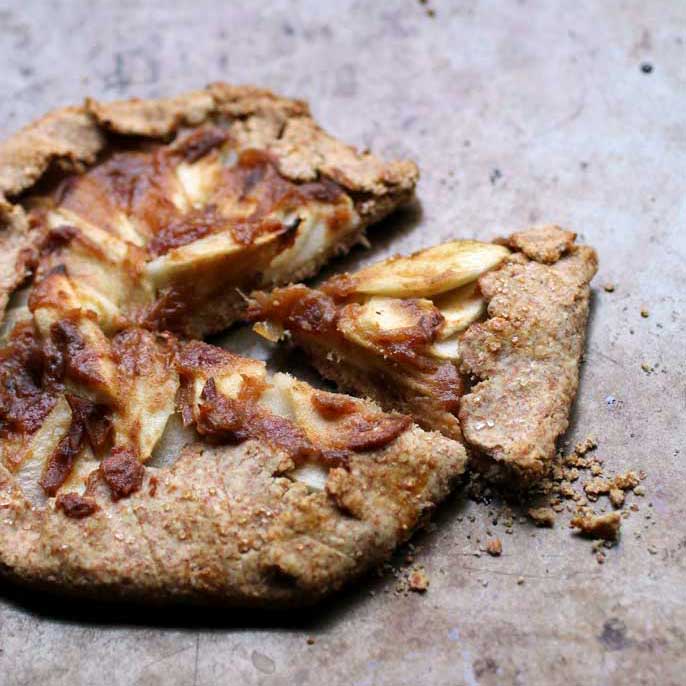