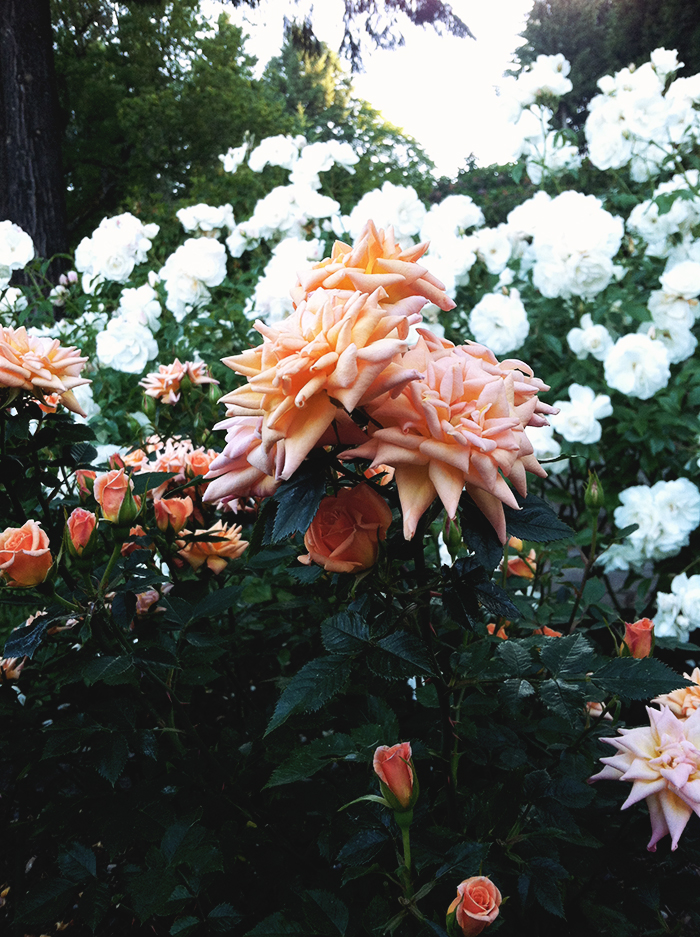 Portland, oh Portland, what a weird, quirky, beautiful town you are. I would totally marry you and move to be with you except that visiting you made me remember that I really kind of hate hiking.

So…another extraordinarily long trip recap of my family trip to Portland lies ahead, filled with tons of food pictures and way too many details.

To the trip recap!

This trip–our first significant family vacation in several years–was to celebrate my brother’s recent graduation from high school! So my family flew in from San Francisco and I flew in from Houston two hours later. Unfortunately, waiting for me meant they’d lunched at IKEA since they didn’t want to go back and forth from the airport, but luckily we made up for that by going straight to Voodoo Doughnuts! 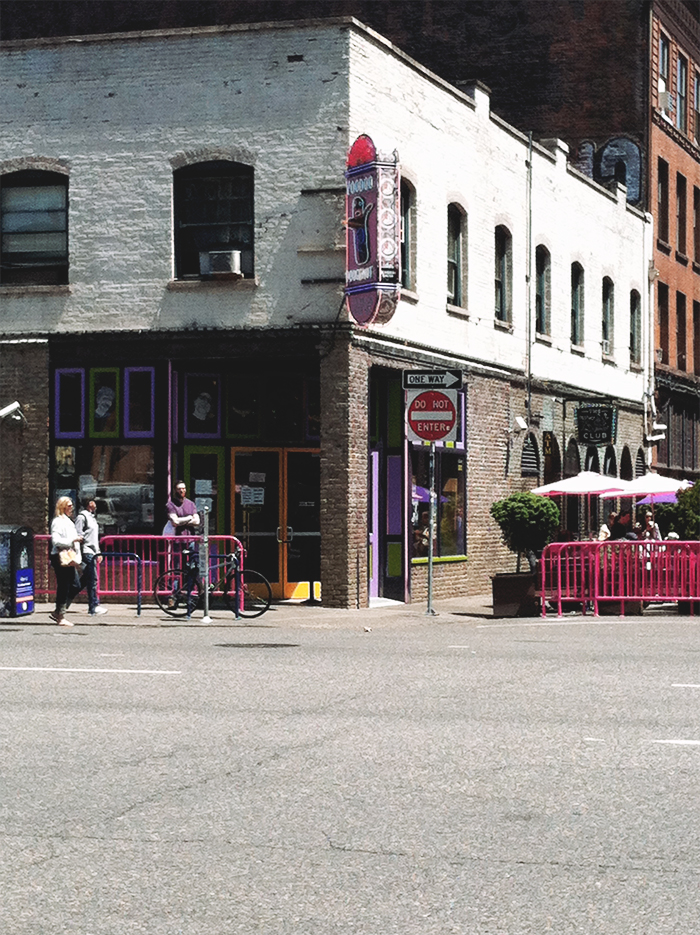 It feels extremely weird to hate on a fried object of any kind, but the doughnuts we got were not great. I mean, they’re passable. But kind of chewy. And the decorations aren’t particularly appealing. However! You can get married at Voodoo Doughnuts and they’ll provide complimentary doughnuts and coffee for six friends. So there’s that. Also, they supposedly chose their name because “Voodoo” had a lot of O’s, which are shaped like doughnuts. Also, they apparently made REALLY horrendous doughnuts back in the day and only recently started to consciously up their doughnut game. So I’m not crazy!

Verdict: Walk on by (that looooong line) and save your calories for elsewhere. Or split one doughnut with friends just to say you’ve been there.

After checking into our condo, we spent the afternoon exploring a bit of the Pearl District, which is so so cute. We stopped in a market to pick up a few food items and I basically left feeling that Houston is lacking on the grocery store front.

We went to dinner at Porque No?, or what is probably Portland’s CUTEST TACO PLACE in the land. Since it was Taco Tuesday (.50 off all tacos), we all got tacos. My vegetable and fish tacos were decent, not amazing. I’d be curious to try the Bryan’s Bowl next time, which seemed to be extremely popular among yelpers. The chips were heaven though because thick cut = heaven.

We had a leisurely breakfast at the condo before heading to Pioneer Courthouse Square for our walking tour.

I don’t even know how to start describing Erik Kennon, but I guess I’ll start with the fact that he has a YouTube show called Grandma’s Cookin’. After hearing all his friends claim that the best Mexican food came from their grandmas, he had the idea to create a show that would focus on cooking with grandmas all over Mexico to learn how to cook the best, most authentic Mexican food. He successfully kickstarted the show, and may possibly be coming to TVs everywhere in South America.

He also used to be a tour guide in Spain and got kicked out because it’s apparently illegal for foreigners to give talks about Spanish history (or something to that effect). So now he gives 2-hour walking tours every day during the summer-fall months. And they are great! Very entertaining. (The tours are free! with a suggested tip at the end.)

We had planned to head back to the Wednesday farmer’s market afterwards, but instead we stopped and wandered around the food trucks. We sampled Indonesian skewers, a hot brie sandwich from Grilled Cheese Grill, chicken and rice from Nong’s Khao Man Gai, and a barbeque tofu banh mi from some other Vietnamese food truck. 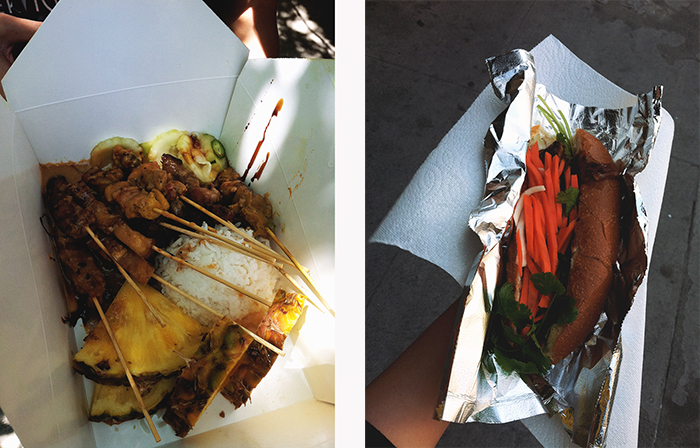 We spent a good while browsing through Powell’s (world’s largest bookstore) and stopped by Pearl Bakery for some bread for sandwiches later in the week. I didn’t realize until later that Pearl Bakery was named to The Daily Meal’s list of top 50 bakeries in the U.S.! 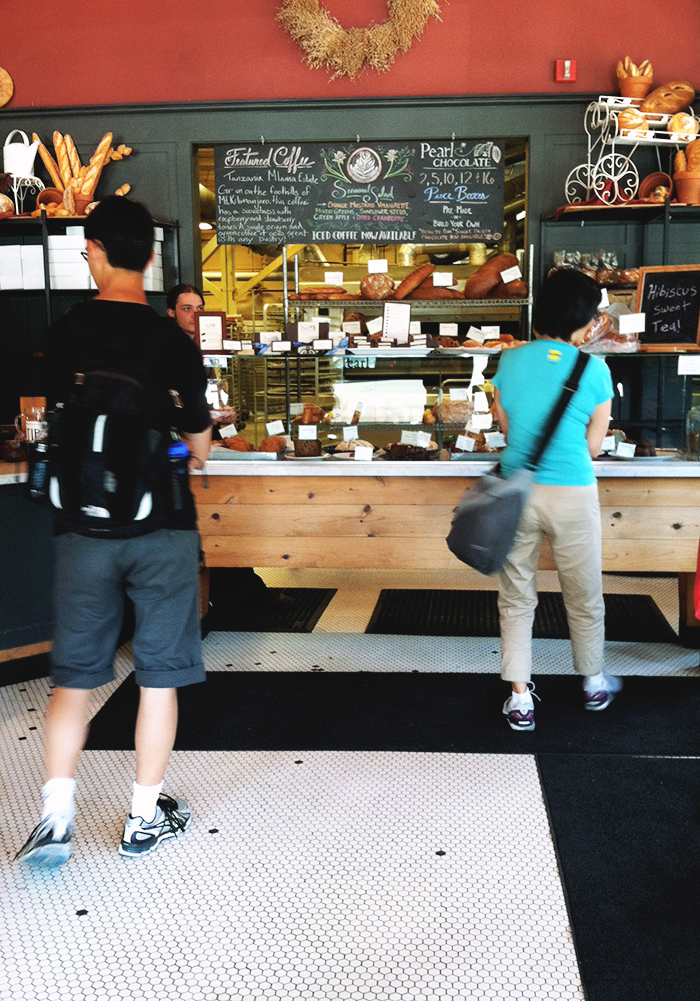 They had great samples for sure.

Then we headed to an early dinner at Pok Pok to avoid a line. Lucky for us, we were so early, there was exactly a ZERO minute wait!

We ended up getting the Papaya Pok Pok salad (quite spicy for our tastebuds, and not anything super special in my opinion), a grilled eggplant salad with egg, shrimp and prawns (pretty good), a coconut curry with fish balls, green curry and Thai eggplant (my favorite), as well as the Pok Pok special (half a roasted game hen) and their famed Vietnamese fish sauce wings. We got 2 orders of rice (one sticky, one regular) on the side and it was a perfect amount of food!

There was a Salt and Straw nearby and we walked over to check it out, but decided we were too full. Later, we walked to another Salt and Straw about a mile away from the condo and oh my gosh. It was so good. The line was quite long and took awhile, but it was totally worth it because when you get up to the front of the line, an employee will greet you and offer you samples. I tried the olive oil, almond brittle with salted ganache, and pear and blue cheese. All so good. I ended up getting a split scoop of the almond brittle and pear and blue cheese. 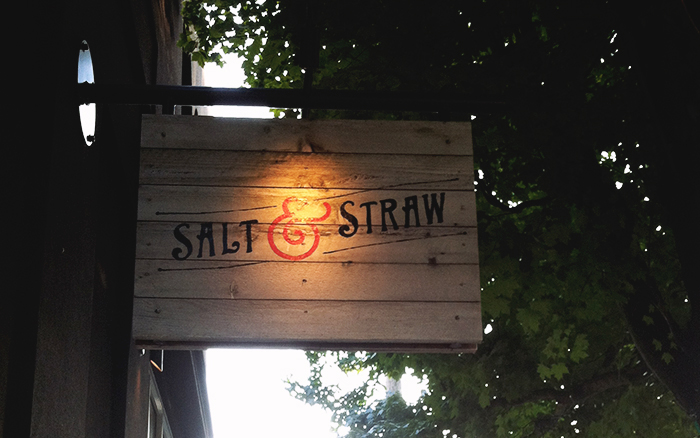 We started with a 3-mile (round-trip) hike to Council Crest, the highest point in Portland (I think). 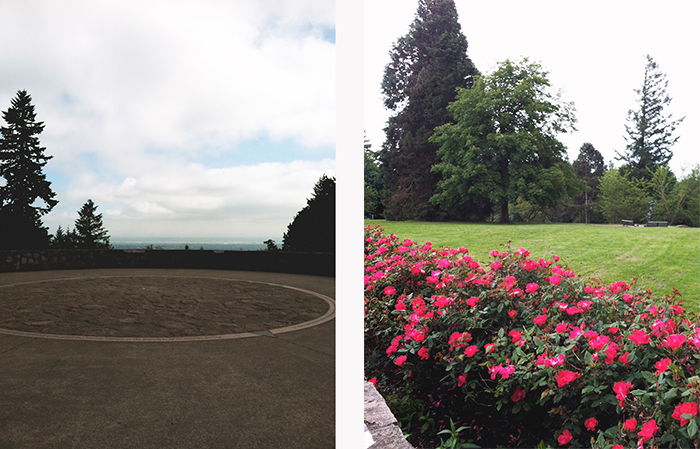 This was in preparation for our food tour later in the day. Also to enjoy nature.

Wednesday also happened to be the super exciting day I met up with Michelle!!!!!! 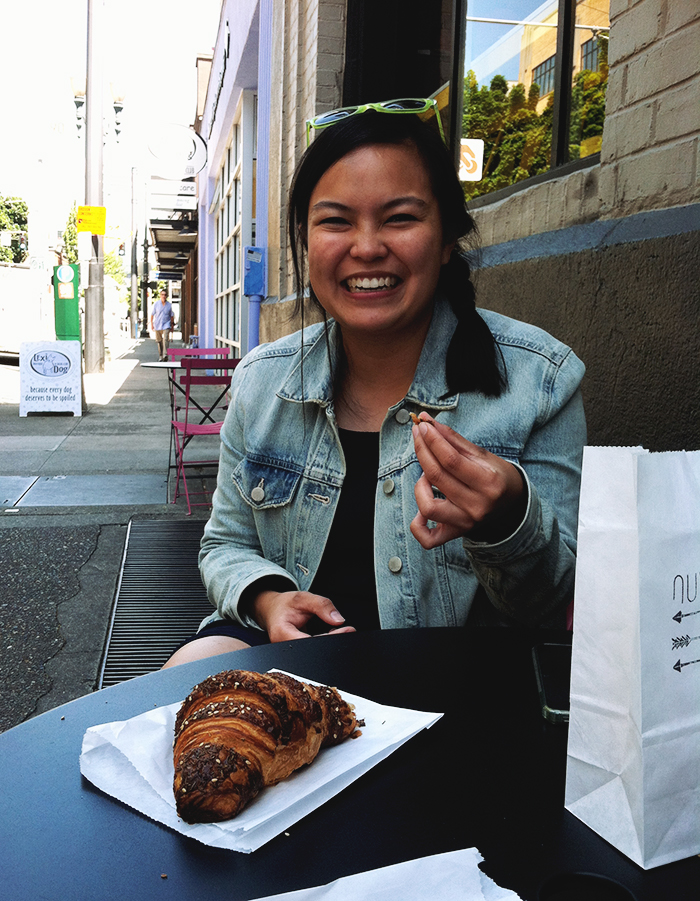 Meeting her in person was so so crazy after being a devoted follower of her blog for years. Does anyone else kind of build up famous bloggers as celebrities in their mind? Well, she was the opposite, in the best way possible. Just so friendly and bubbly and down-to-earth, like someone I could totally see myself being friends with in real-life! (Not unlike another super fun blogger I met.)

I tried not to fill up since our 3-hour food tour was right after, but I could not control myself when it came to this chocolate-almond croissant.

As for our food tour…I have very few words that can be mostly conveyed in these pics + captions: 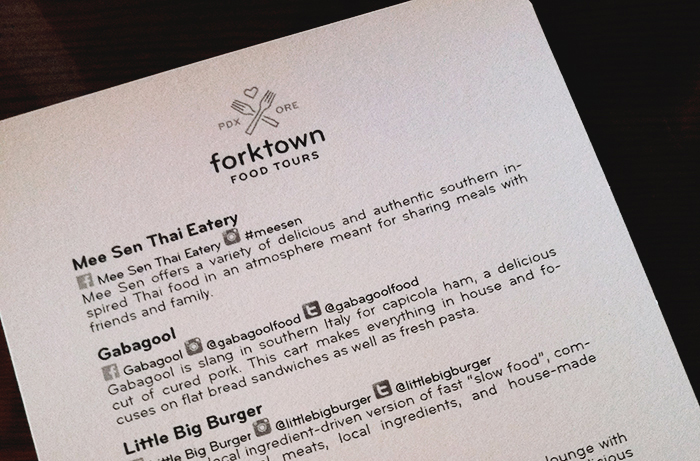 If you are thinking that’s way too much food for one person to possibly ingest over the course of 3 hours, you would be very correct.

We essentially went to the Rose Garden afterwards and passed out (or walked around in a very sluggish fashion. 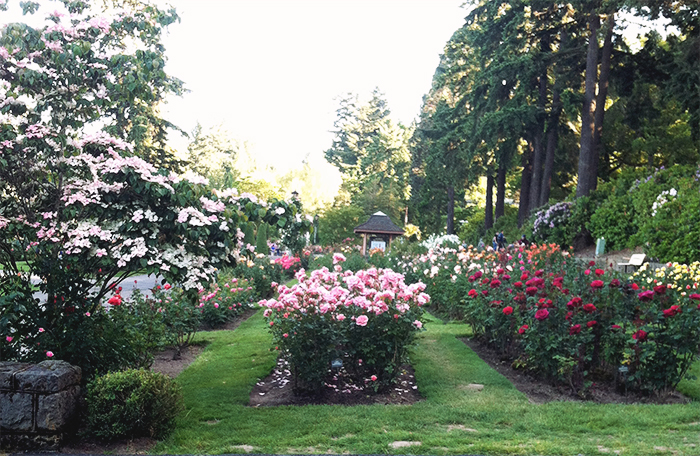 In an amazing display of stomach resilience, we somehow enjoyed a light dinner later that night. 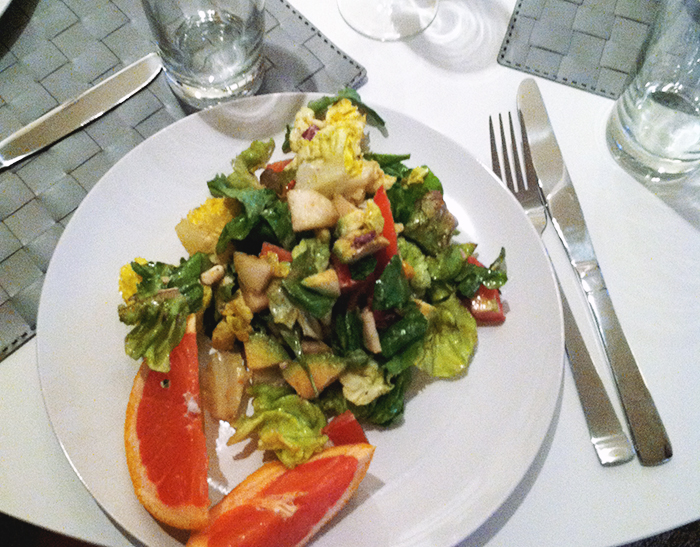 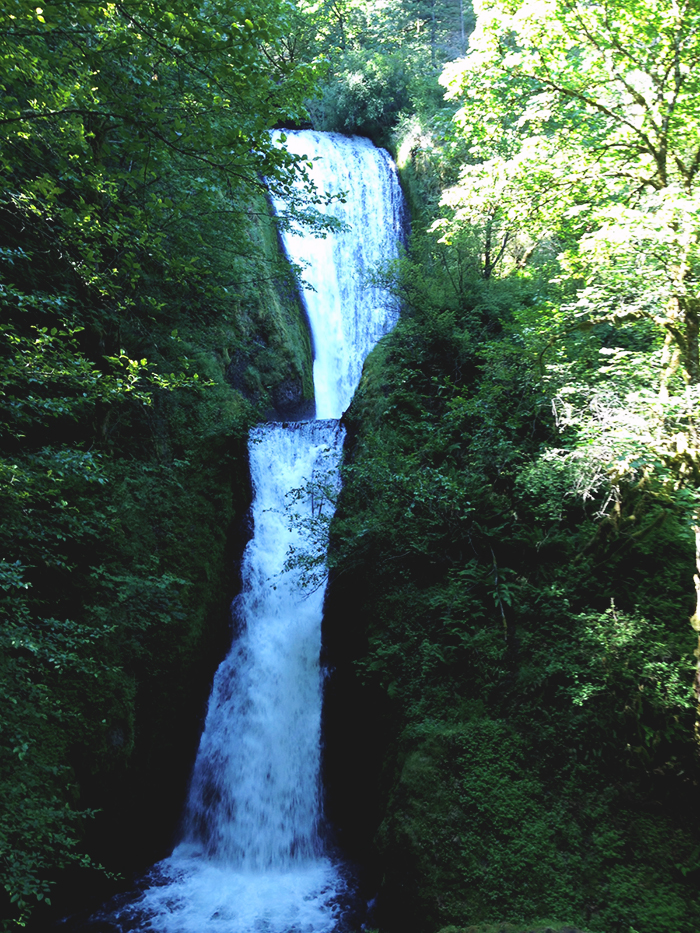 We did a mini 2/3 mile hike to one waterfall, but our main event was Multnomah Falls, where there was an even bigger, more gorgeous waterfall. The only problem was that the hike to the top was a 1-mile, steep-ish trek. I was not really feeling it.

Basically, you can see this view (photo to the left) when you step out of the car You can walk 0.2 miles to that bridge you see and that’s a pretty great view too. Then you can hike a mile up to the top and see a river. Which turns into a waterfall that you can’t see. That’s all I’m going to say.

Afterwards, we drove to a stand-up paddleboarding spot where we had a picnic lunch before attempting to paddleboard. I didn’t realize how terrifying trying to stand up would be (particularly when don’t want to get fall into icy cold water), but it was a pretty good time. Our windsurfing neighbors were amazing! 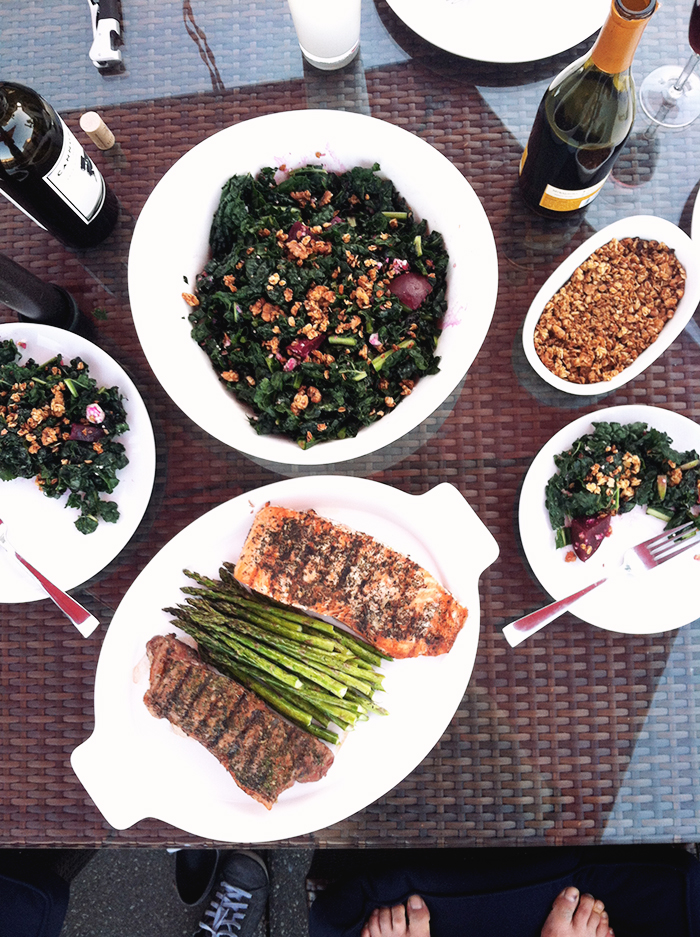 We made dinner at the condo that night—my dad grilled salmon, steak and asparagus and I made this salad.

Later, we had a rousing game of Scrabble in which my sister (who wasn’t even playing) beat the pants off of everyone. As an English major, I was embarrassed. 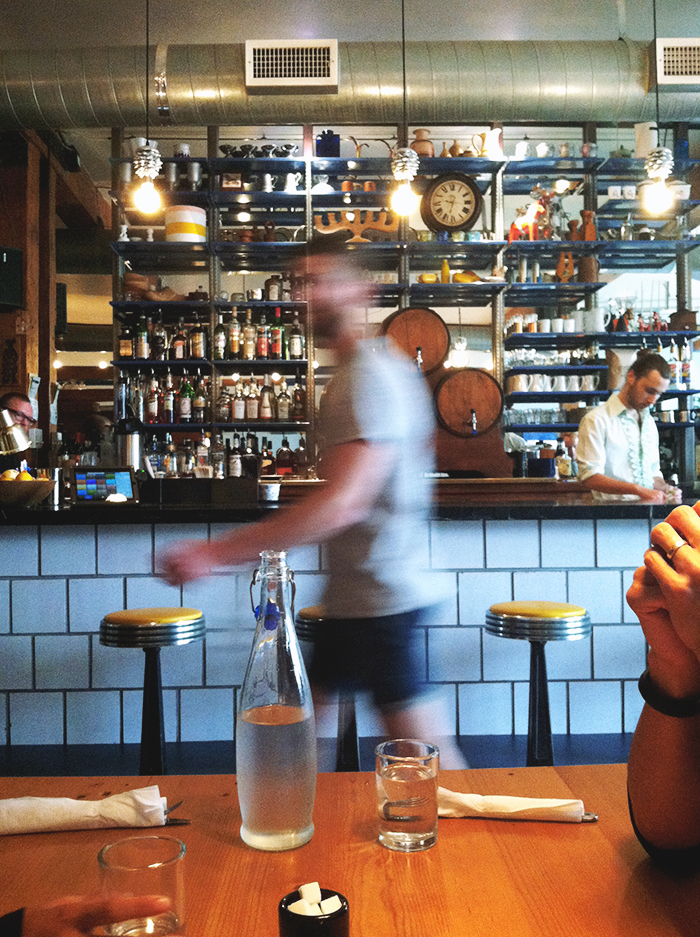 We brunched at Broder Nord! I actually had a lot of brunch places on my list to try (more so than dinner palces), but it was hard to fit in brunch during the week since we often had other plans and didn’t want to start out the day too heavily.

Two orders of aebleskivers, one solstice bord, and one order of fruit fritters (aka pancakes) later, we were full but not stuffed. So, so delicious. 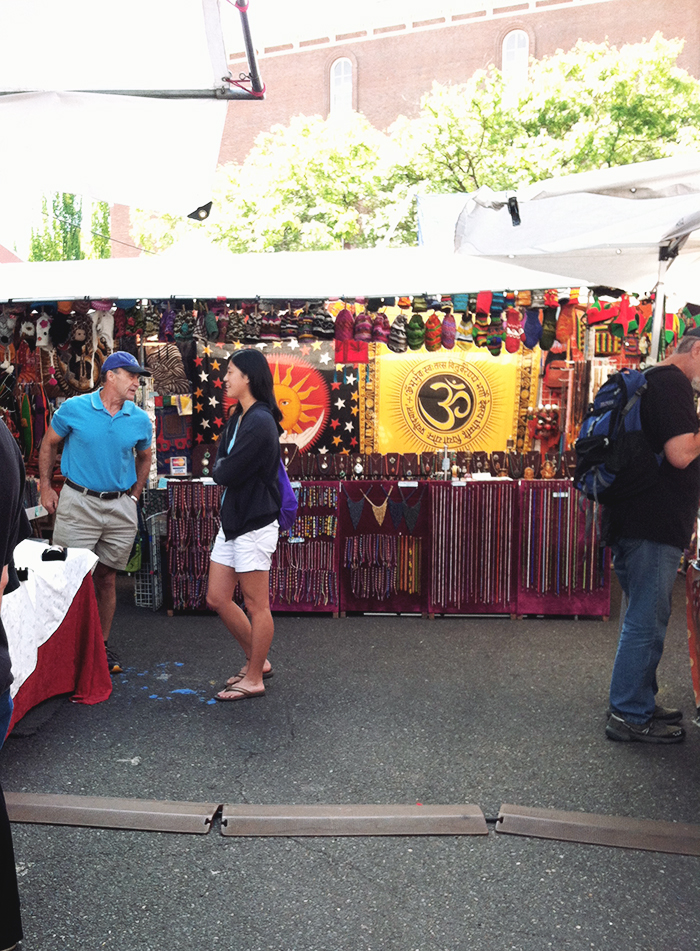 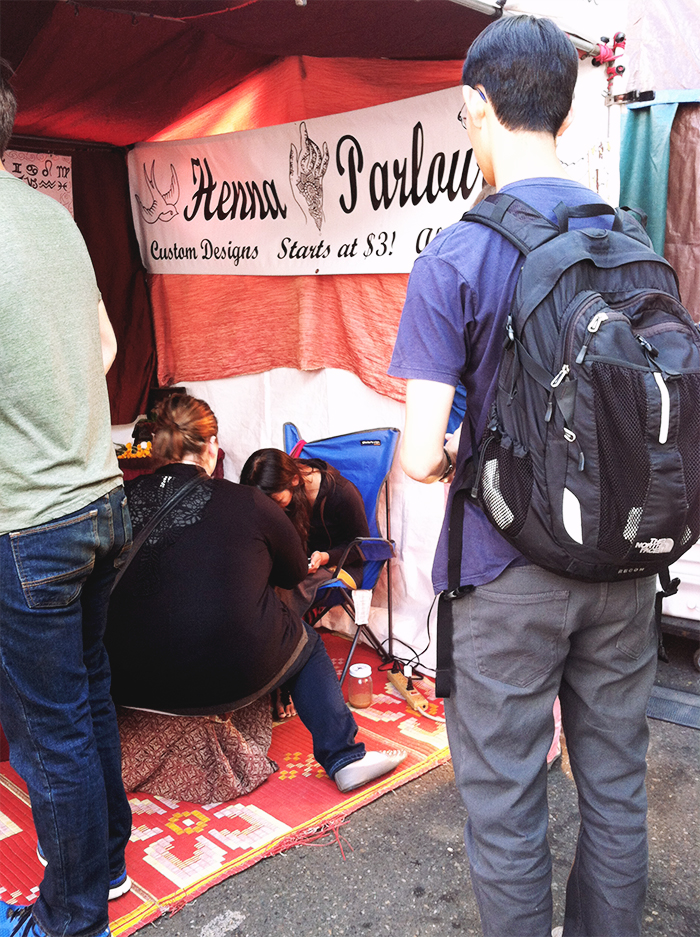 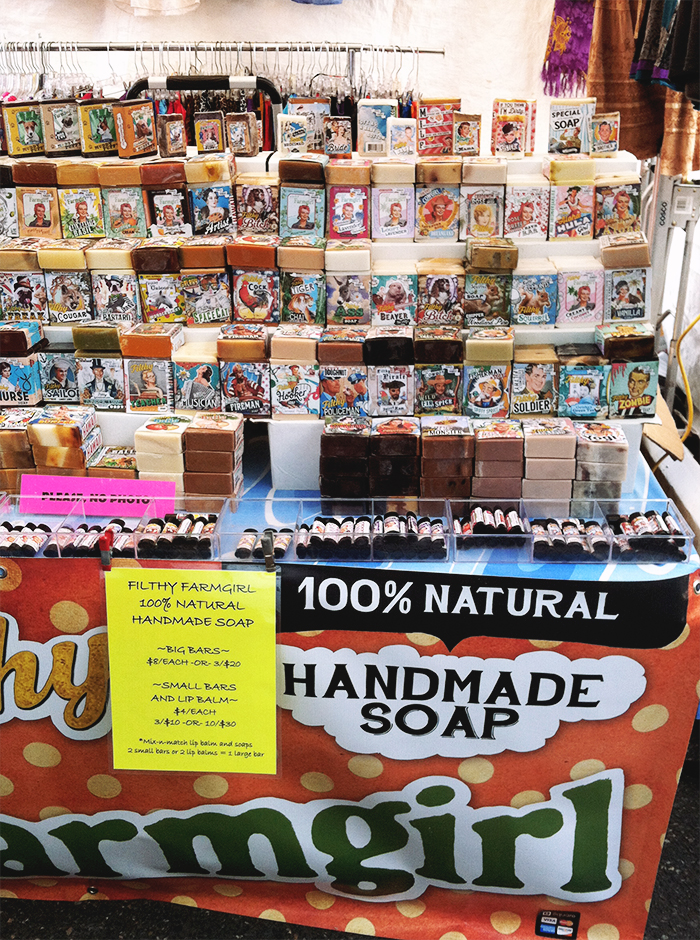 But on the way, we stopped to ask a policeman for directions, and he directed us in the complete opposite direction to the Saturday market, which turned out to be a completely different crafts-focused market. So we wandered through it and I bought a really cute printed onesie for my coworker before backtracking to the farmer’s market. 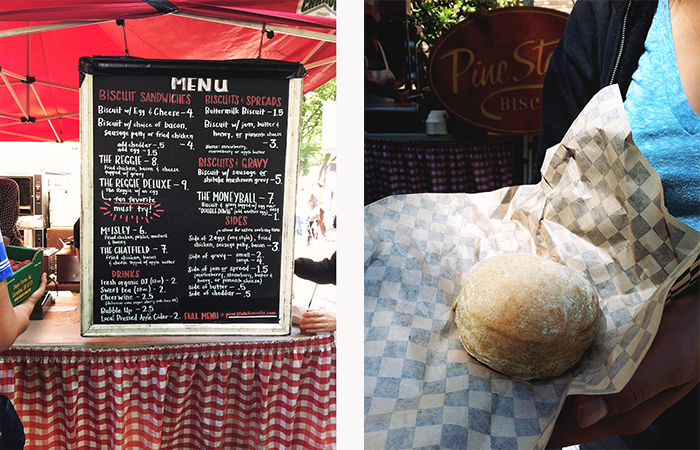 SAMPLES GALORE. I don’t think we bought anything aside from some Ruby Jewel cookies, a biscuit from Pine State Biscuits and some apple cider, yet we nibbled a ton.

Then I met up with Portlander friend Karen at Blue Star Doughnuts! Made of brioche dough, these doughnuts are reputed to be far superior to Voodoo Doughnuts. We split the bourbon blueberry basil and lemon poppy and yes, they are far more delicious. All the flavors sounded SO AMAZING. If they had been a little crisper on the outside and a little less chewy, they might have been my ideal doughnut. Alas.

When I found my siblings after, they were completely giddy… 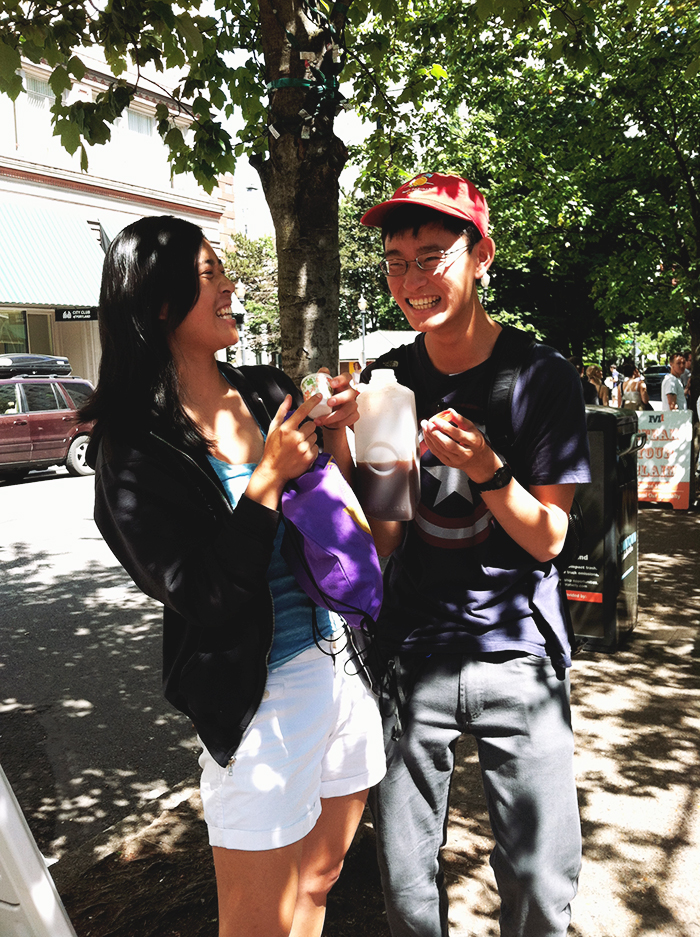 …which turned out to be because they had drank nearly a half gallon of apple cider between the two of them. We took a trip back to the food carts so I could get some real food and re-visited a Georgian food truck they’d been to earlier. They claimed the cheesebread and dumplings were delicious, so we split another order (the cheesebread is SO.CHEESY. And the dumplings are like non-Asian soup dumplings!).

We bummed around the Courthouse Square for awhile afterwards. 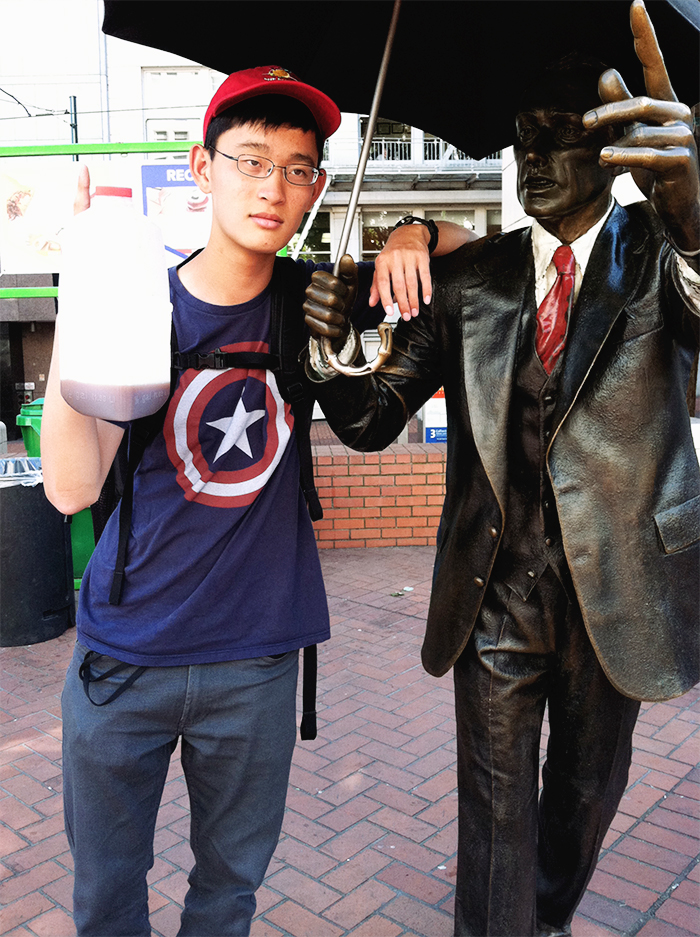 We spent our last night eating some (really delicious) leftovers and just hanging out. Such a fun overall trip! With SO MUCH EATING.

Bottom line: Portland is awesome and I can’t wait to go back! Someone please just explain to me why hiking is fun.