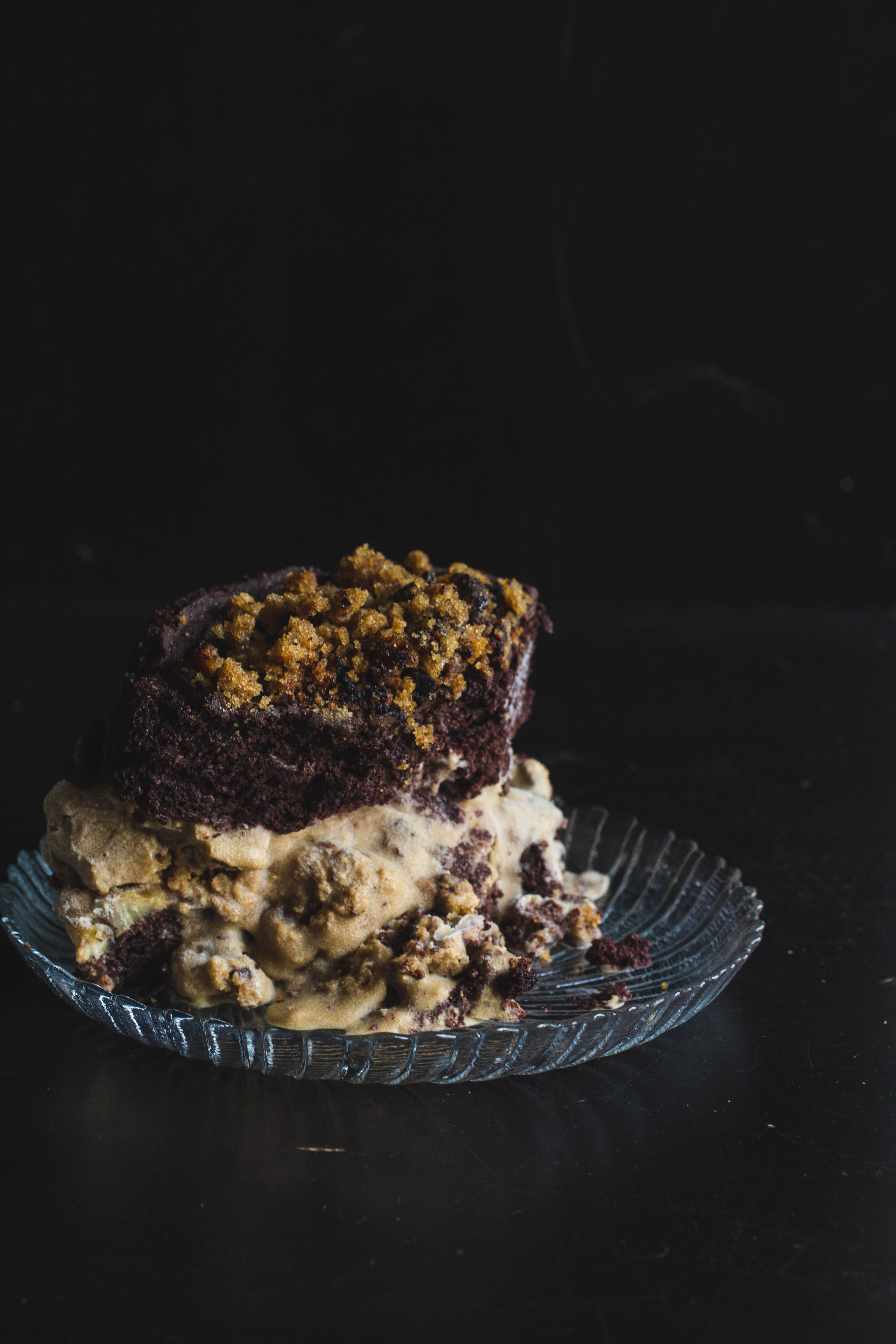 “I’m feeling so weird. I have no interest in making a cake.”

“WHAT?” Erik’s raised eyebrows were the equivalent shouting in surprise, given his level of exhaustion after days of working on his latest grad school paper. 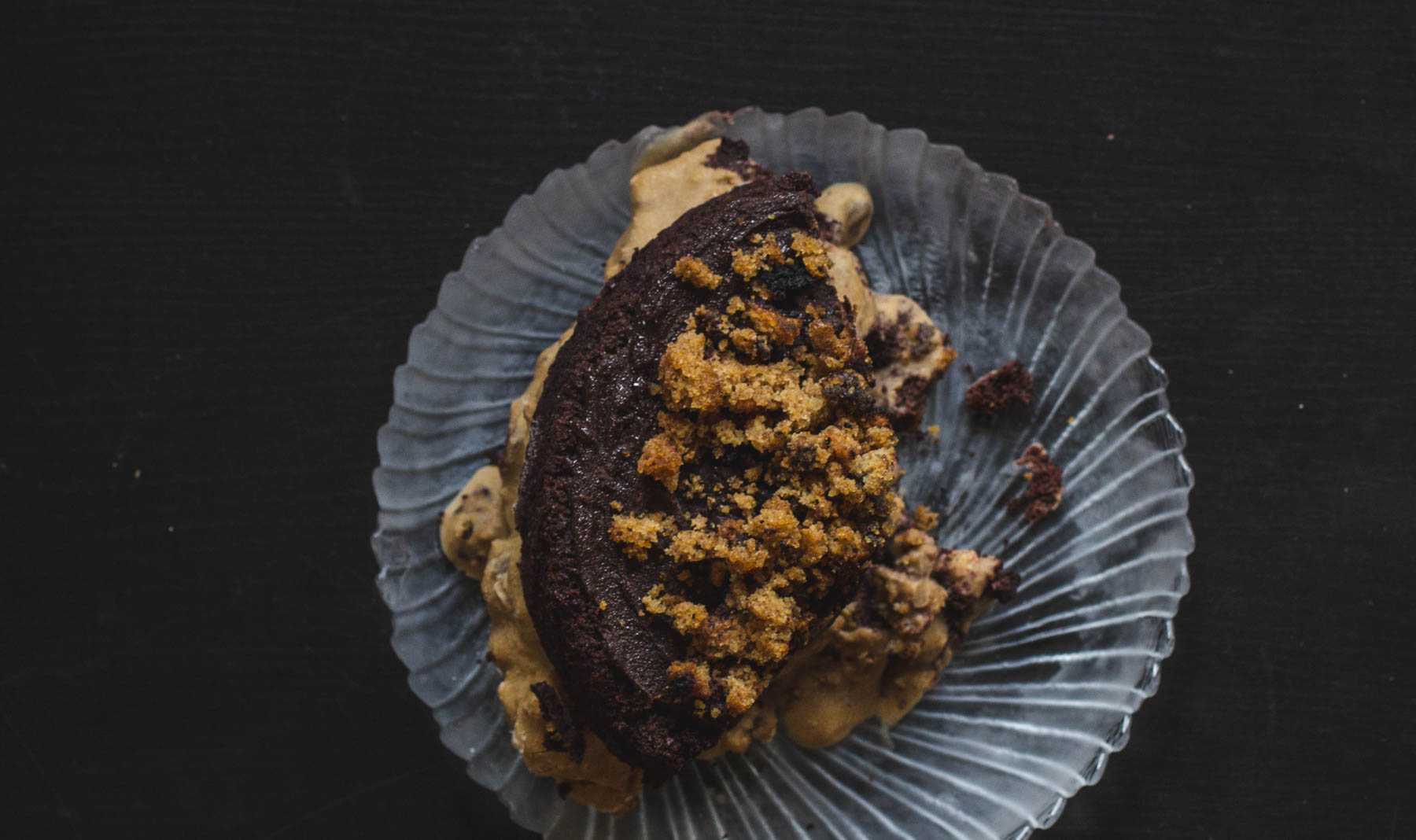 I don’t know if it was business school or the fact that I hadn’t been craving sugar in the weeks leading up to my birthday, but when it finally rolled around, I really did have pretty much zero interest in making a cake for myself. Of course, a cake wasn’t even at all necessary thanks to cupcakes from my sister, a pastry-laden brunch with a good friend, and an extraordinarily lavish seafood birthday dinner with Erik that ended with a spectacularly large bananas fosters cake, onto which our waiter poured a stream of fiery rum that sizzled away quietly on the table. I attribute my dream of being pregnant that night to the food baby aftermath. 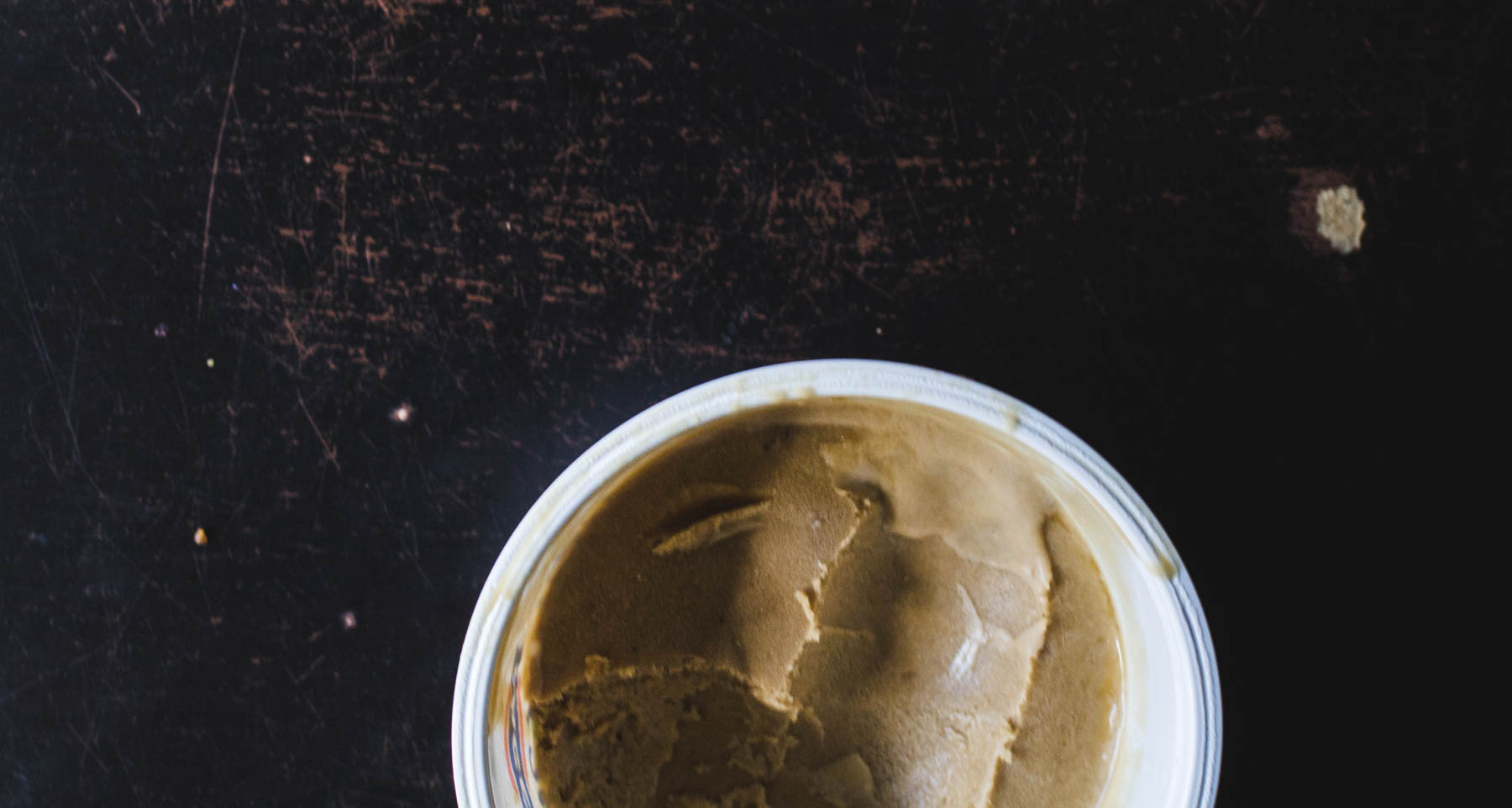 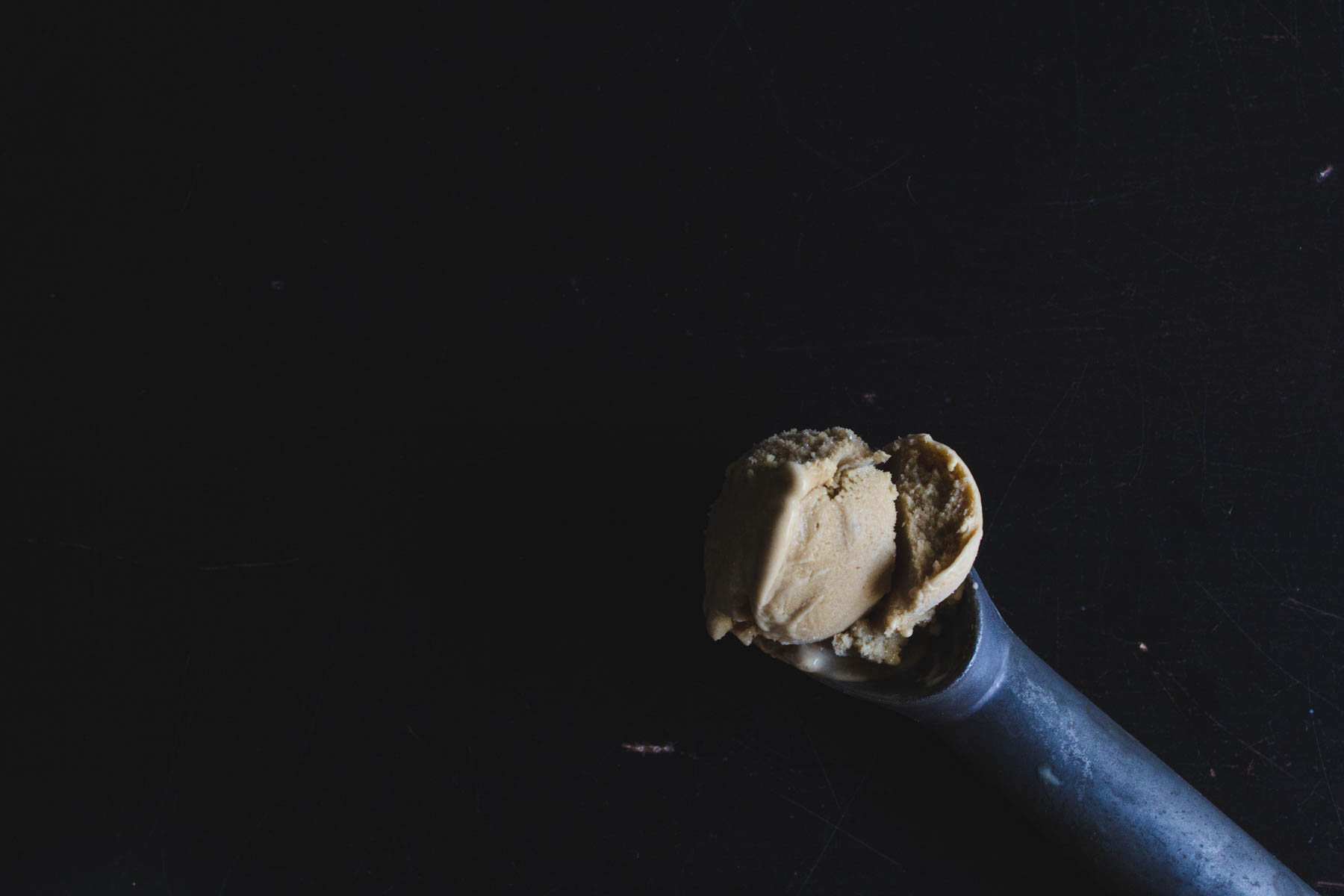 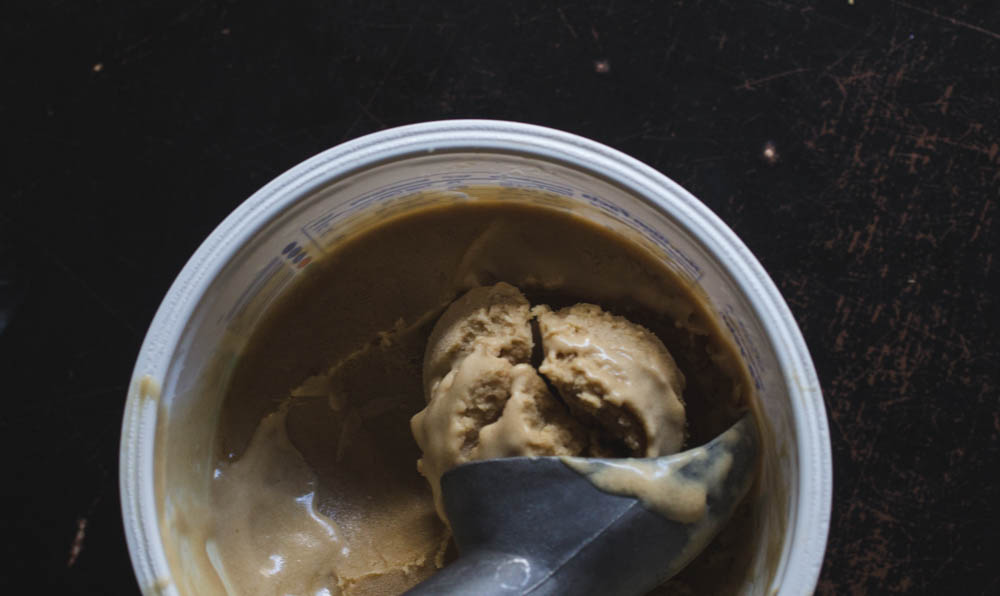 But then I had the bright idea to throw myself a birthday gathering and even though they say do whatever you want on your birthday, I couldn’t reconcile myself to the idea of a cake-less party. Expectations, you know. 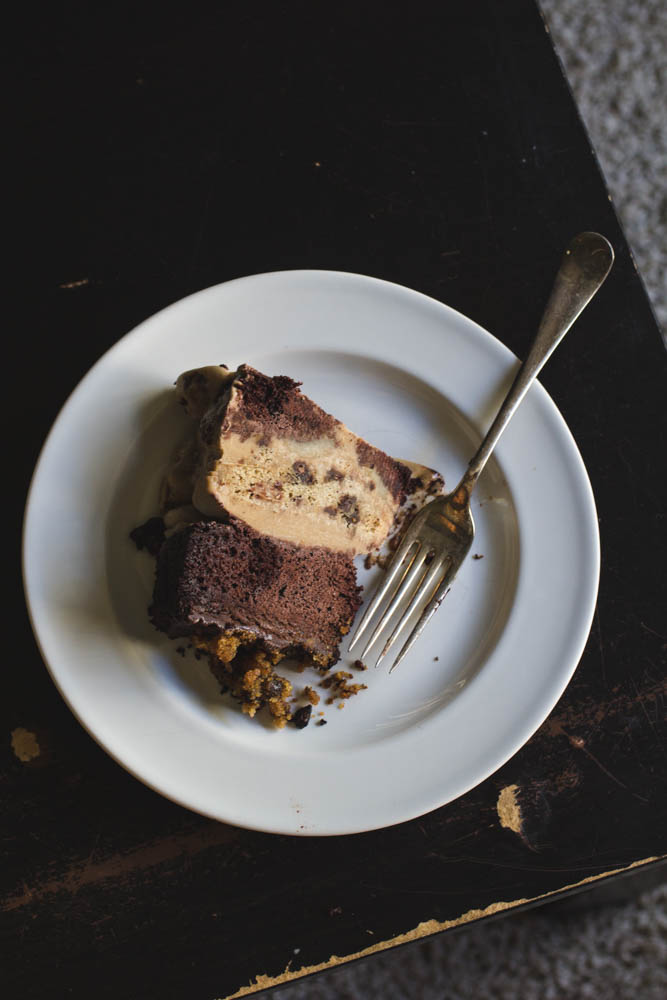 So the night before the gathering, I mindlessly mixed up a batch of coconut milk ice cream and baked up my favorite vegan chocolate cake recipe (splitting the cake into one portion chocolate and one portion vanilla-chocolate-chip with the vague idea of making some kind of hybrid layered cake served with ice cream). Upon releasing the chocolate chip cake from its pan, I found the chocolate chips had cemented themselves to the bottom of the pan, causing the cake to fall out in approximately 9,000 uneven chunks and crumbs. Exasperated and still uninterested in the end result, I threw all the cake in the freezer and went to bed.

The next morning, I did what I always do when I end up with cake scraps instead of layers: made a momofuku style cake. A layer of squashed chocolate cake remnants. A layer of chocolate chip cake molded with the help of extra-soft ice cream. More chocolate cake. A slick of ganache to hold toasted cake crumbs. 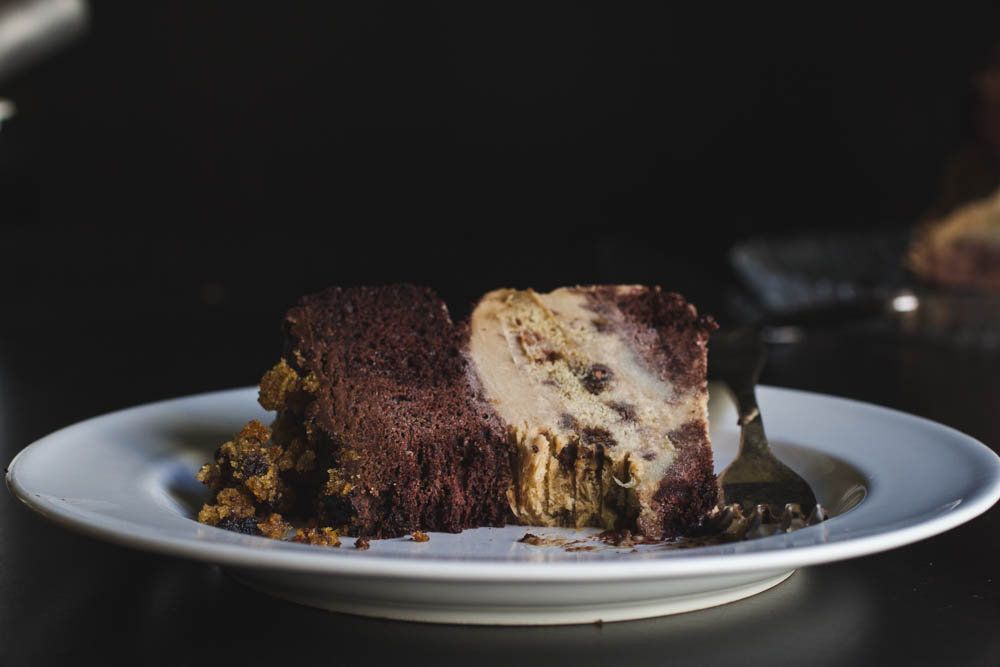 Ultimately, it was a hit. Tremendously moist, dewy chocolate cake, a chocolate-chip-studded cakey middle molded into place by thick ribbons of caramel-tinted ice cream and topped off with toasted morsels of cake: perfect summer food. And of course, it turns out that I didn’t even need to make it. Fretting that there wouldn’t be enough food, I decided to double up on dessert and picked up a package of doughnuts to make a DIY waffled doughnut bar in addition to the cake…and then my siblings surprised me at the party by bringing me a mini cake tasting.

So just in case anyone was worried, more than enough sugar was present on and around my birthday–including this cake, which is personally the best vegan birthday cake I’ve ever had. And now, though there is no way on earth you can argue that this cake is the least bit healthy, I’m sharing the recipe for this really awesome vegan ice cream cake. Because I think we can all agree that birthdays are for splurging. 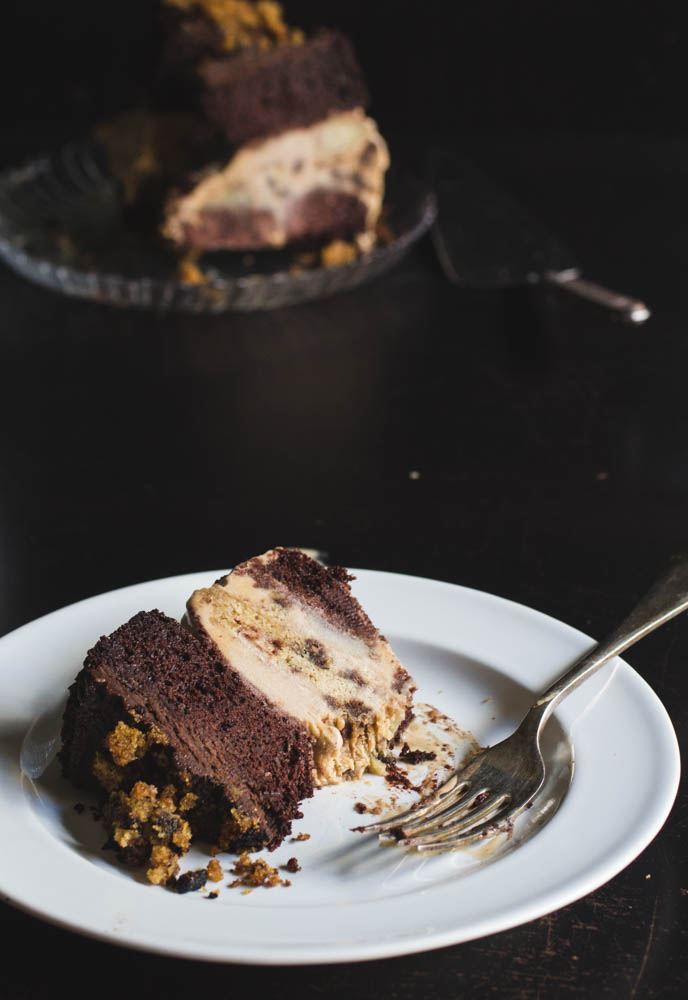 While this is a momofuku-style cake (which is characterized by a structure of using cake scraps for the bottom layer instead of whole cake layers and studded with milk crumbs in between layers), I switched things up a little by toasting cake crumbs in lieu of the milk crumbs for the extra crunchy texture + garnish. Less work, but just as effective.

If you try making this cake, I highly recommend baking the cake layers ahead of time and freezing them overnight so there’s no residual warmth to melt the ice cream. I also recommend making the ice cream base the night before, chilling it overnight, and then churning it right before you assemble the cake so the ice cream is extra-soft and pliable.

Lastly, I promise this cake looked a lot neater and more photogenic before it was defrosted, cut, half-eaten, and re-frozen. Your finished product will not look like it’s hemorrhaging ice cream and bits of cake. 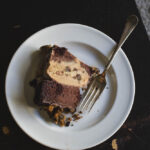 *You can use nearly any alcohol--this is just what I had on hand. The original recipe called for vodka, which is virtually flavorless..