It’s been quite awhile since I’ve made pancakes, but when the craving hit, I decided to revisit an old single-serving recipe of mine. Oh how times have changed–back when I used to consume yogurt by the tub to now, when I can’t even tolerate a few tablespoons in a pancake recipe without breaking out in scaly rashes on my hands. (It’s okay–I’ve switched over to eating cookies instead.)

This is still a pretty basic gluten-free buckwheat-based pancake at it’s core (although the ingredient list still looks long) The pancakes are quick to make once you have an electric griddle for pancakes. I just swapped out the yogurt for a little more almond milk with a splash of apple cider vinegar to imitate the acid in yogurt. I tried these with both maple syrup and sugar and liked the texture better with sugar, though you can use either!

It felt fitting to top this updated dairy-free recipe with drizzles of a certain dairy-free chocolate hazelnut spread I received in the mail. Tbh, the super small amount of dairy in Nutella doesn’t normally bother me, but I just loved the vibrant flavor and silky texture of Nocciolata. The little luscious jar is small but rich–a little goes a long way, and the taste reminds me of the difference between Nestle chocolate chips and Valhrona. Imagining myself as the type of adult who buys Nocciolata instead of Nutella feels like I’m moving up in the world, like when I started splurging on actual face cream instead of just using body lotion (ugh hashtag aging). Is this adulting? 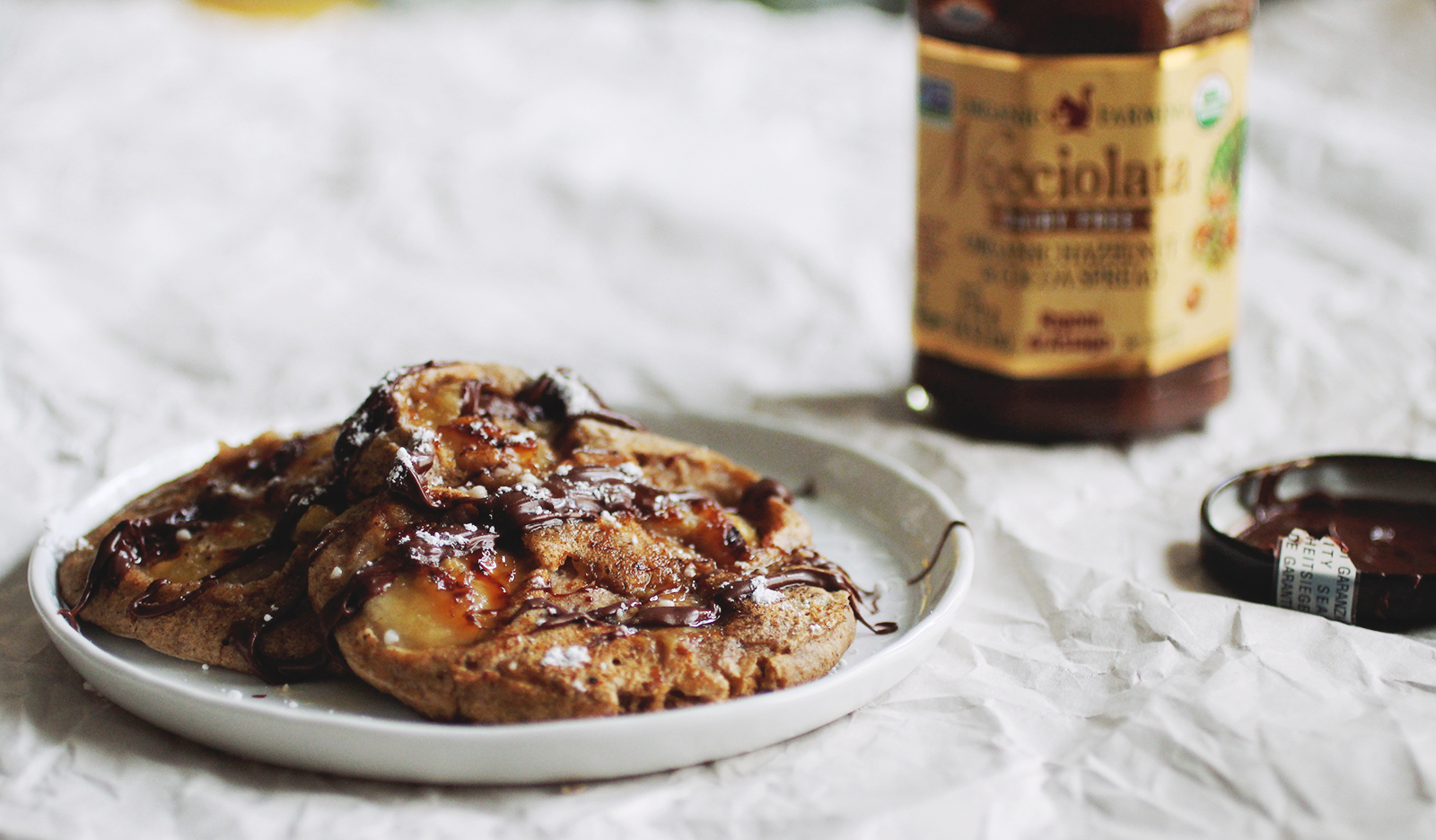 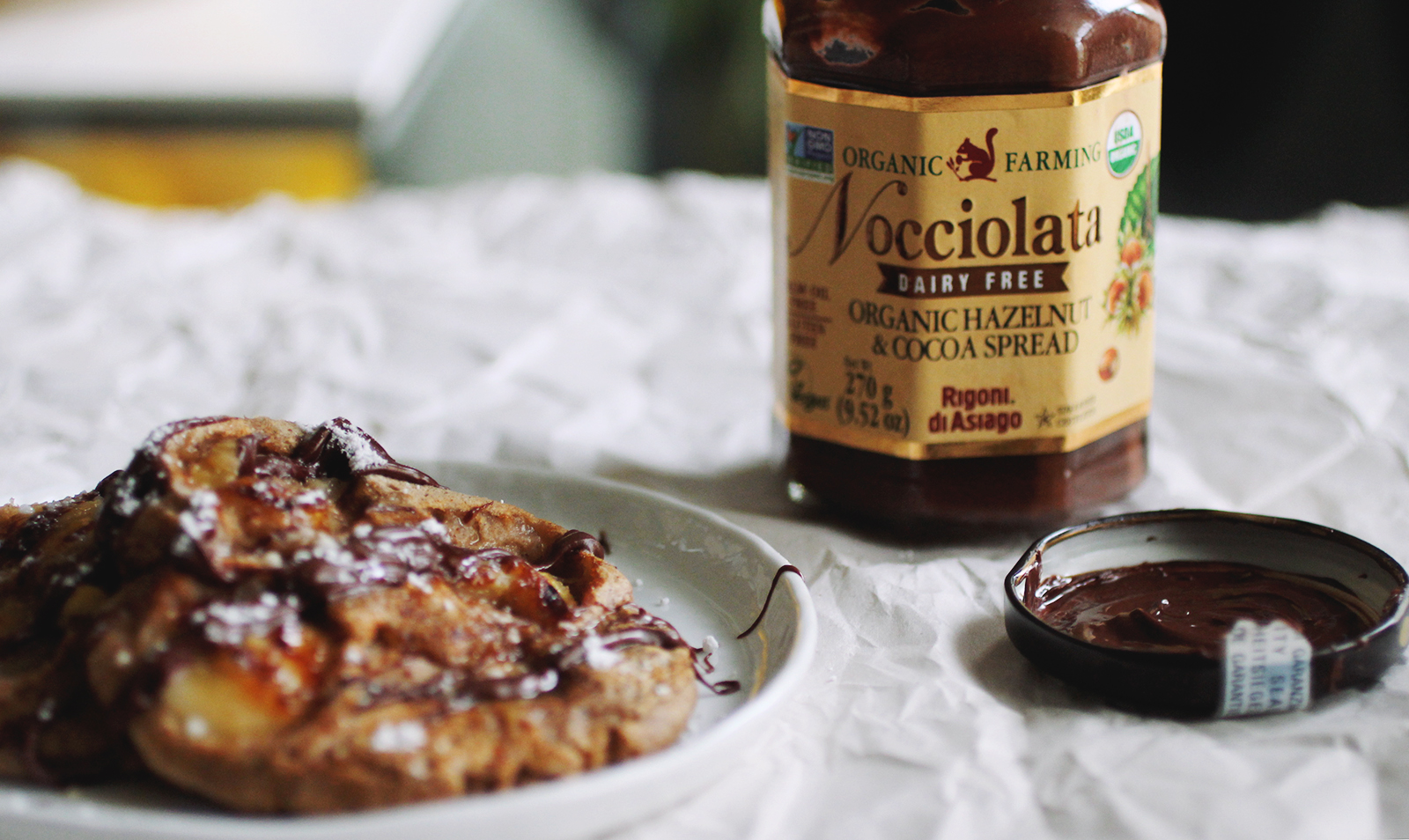 Thanks to Nocciolata for sending me a sample of their product. All their ingredients are organic and non-GMO, with top-quality cocoa, cocoa butter, raw cane sugar, cold-pressed sunflower oil and natural vanilla extract (and no palm oil!). All opinions are my own. 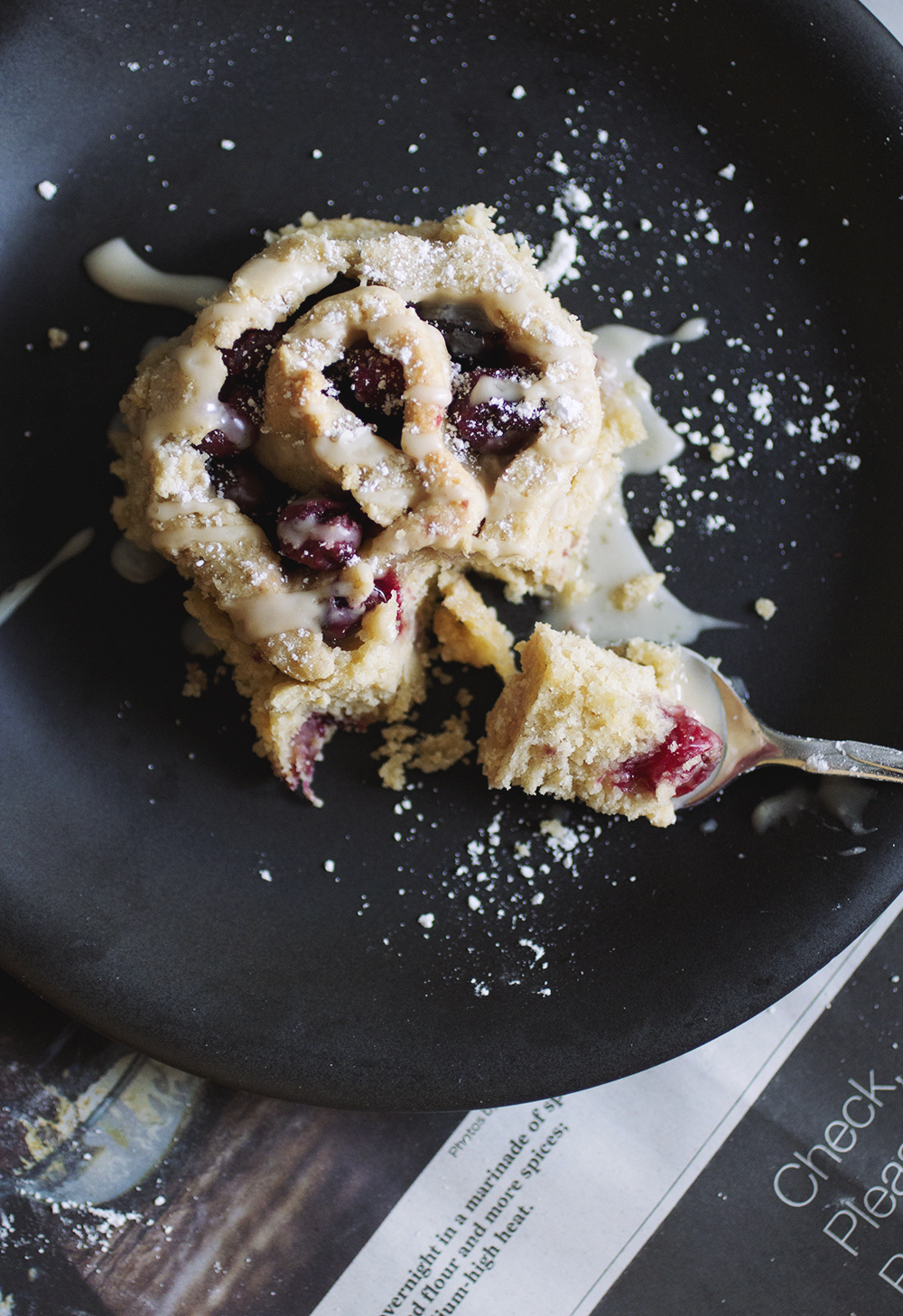 The first time I met Alanna, I’m pretty sure we spent upwards of 5 hours together making, styling and photographing these chilaquiles. I met her grumpy-adorable cat, Catamus, learned about camera lenses, admired her props cabinet, we chatted about our mutual contact (my food photographer uncle) and a bunch of other topics–one of which was potential book deals. 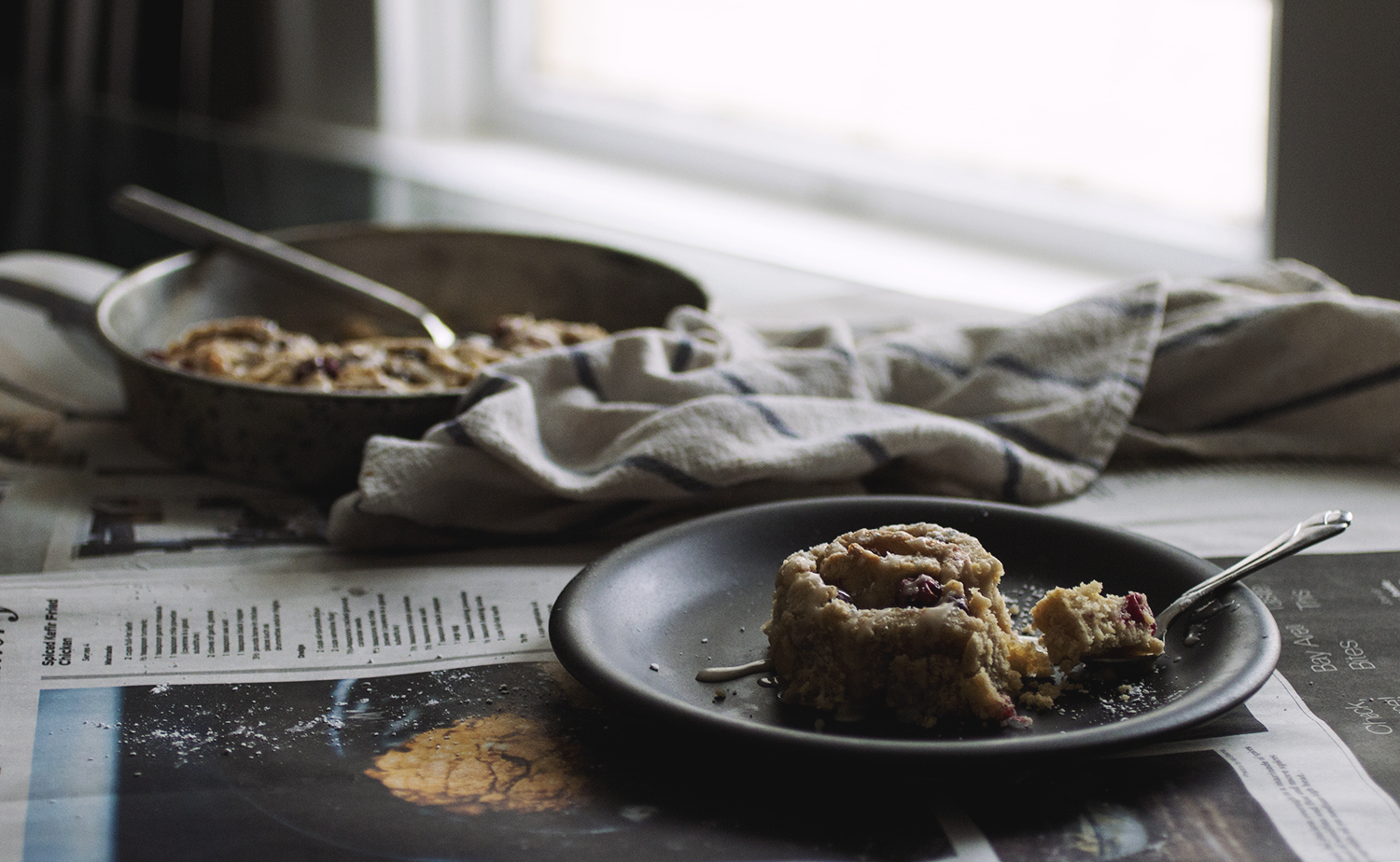 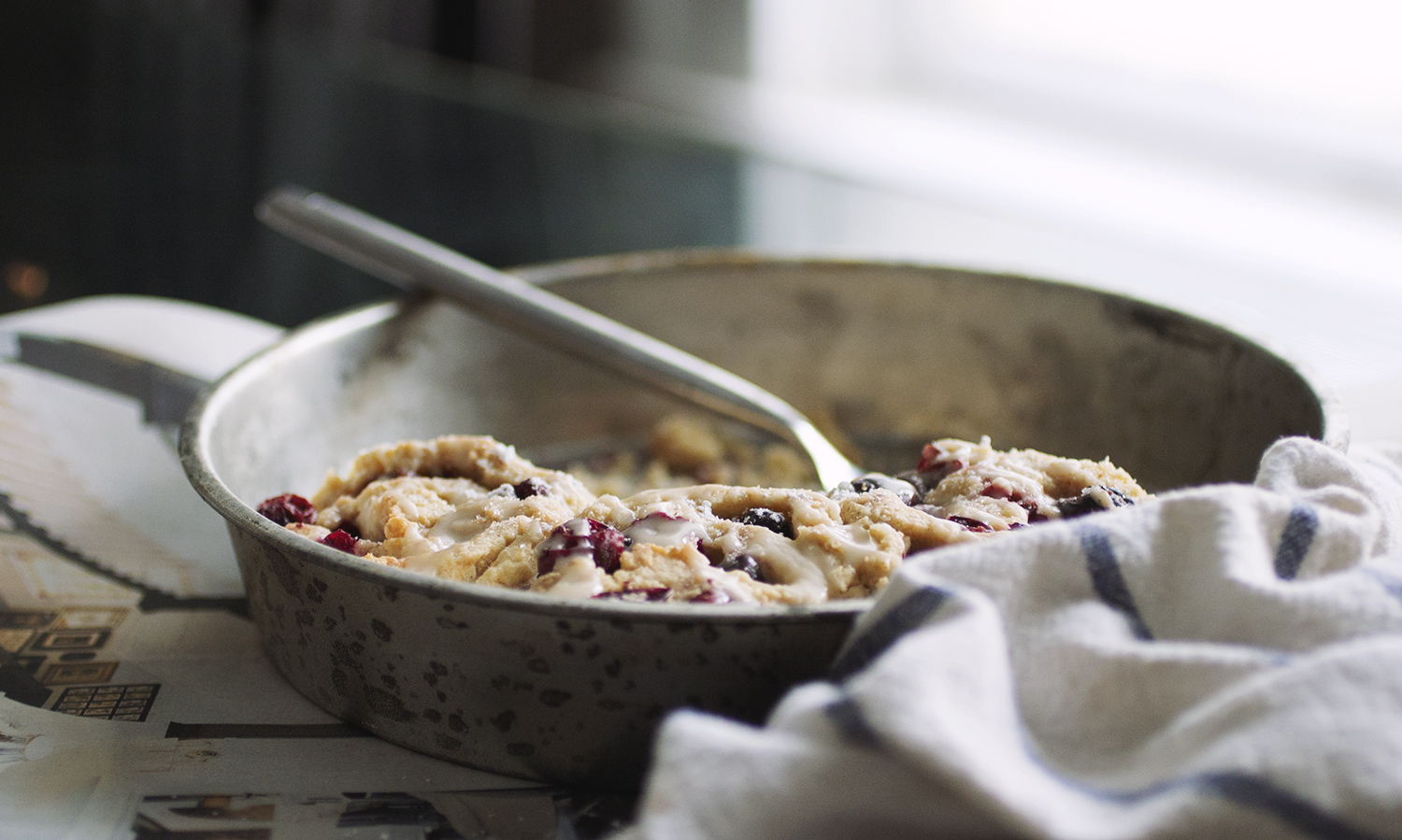 A second and a third visit brought a dinner party with the incredibly talented Pang, Sarah and Lucas, and a visit to Alanna and Jay’s favorite local Mexican spot. I’m pretty sure the third visit was when she not only fed me a slice of an incredible banana tart chilling in her fridge, but also some chestnut financiers she was testing for the cookbook–and then sent me home with a bag full of raspberry swirl biscuits that for some reason or another hadn’t turned out quite right (in Alanna’s mind, anyway. My family and I promptly consumed her generous offering and I proceeded to dream about the “not-quite-perfect” biscuits for the next 8 or so months). 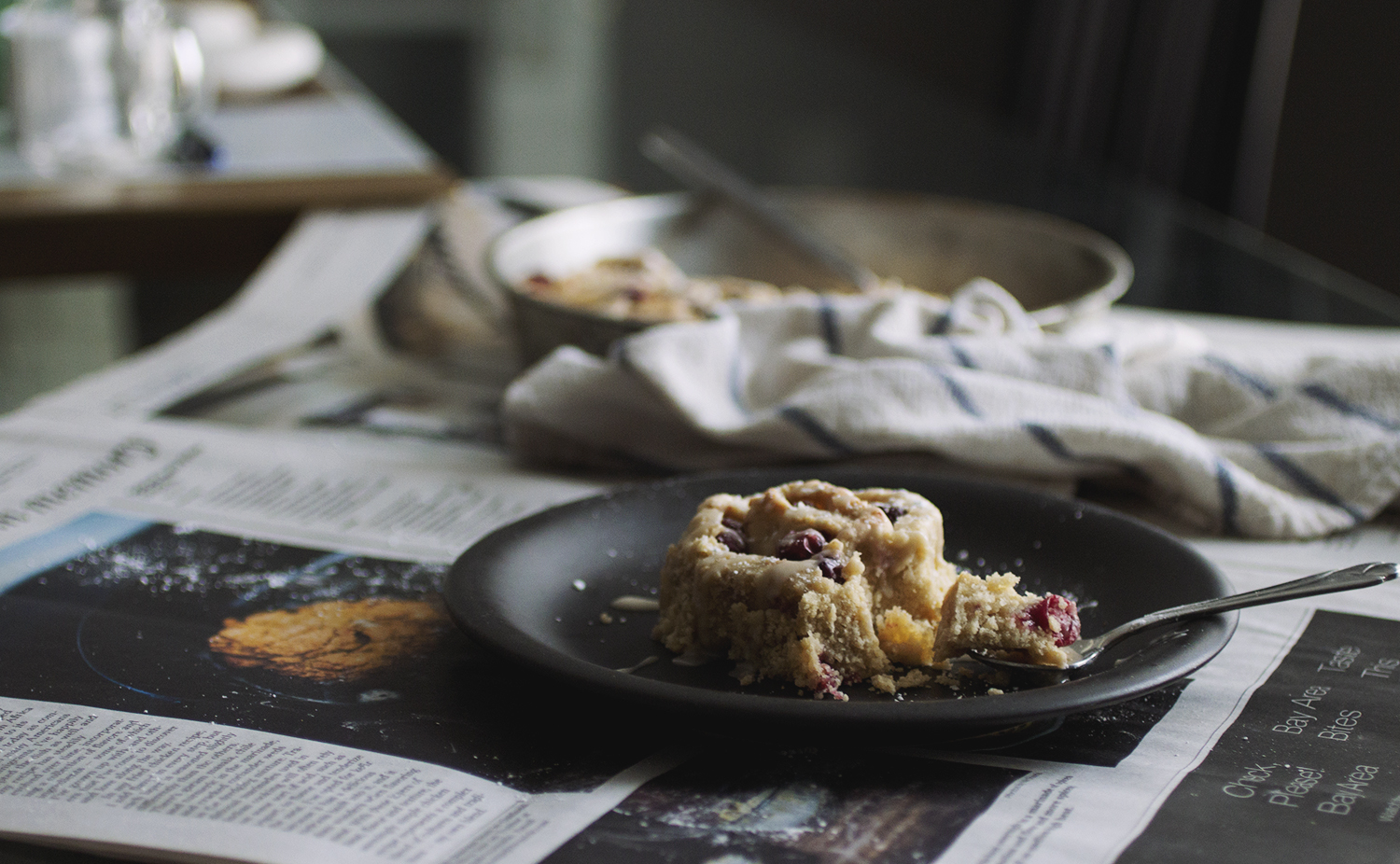 Now that Alanna’s BEAUTIFUL new cookbook is out, I had to honor it and her with those same biscuits. Alternative Baker celebrates alternative flours in gluten-free recipes where the focus is really on how delicious flours like chestnut, mesquite, oat and corn can be rather than the fact that gluten is missing. 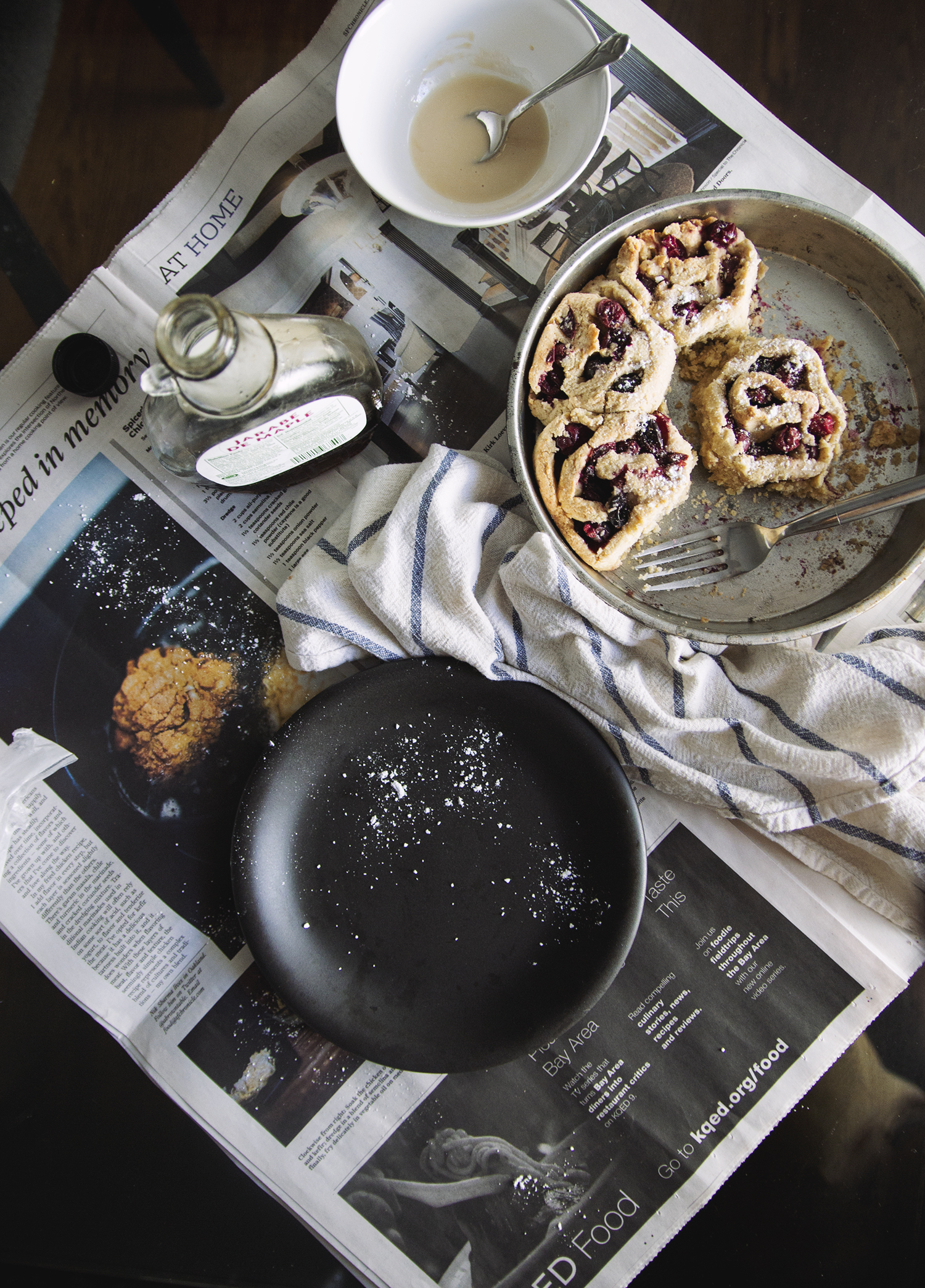 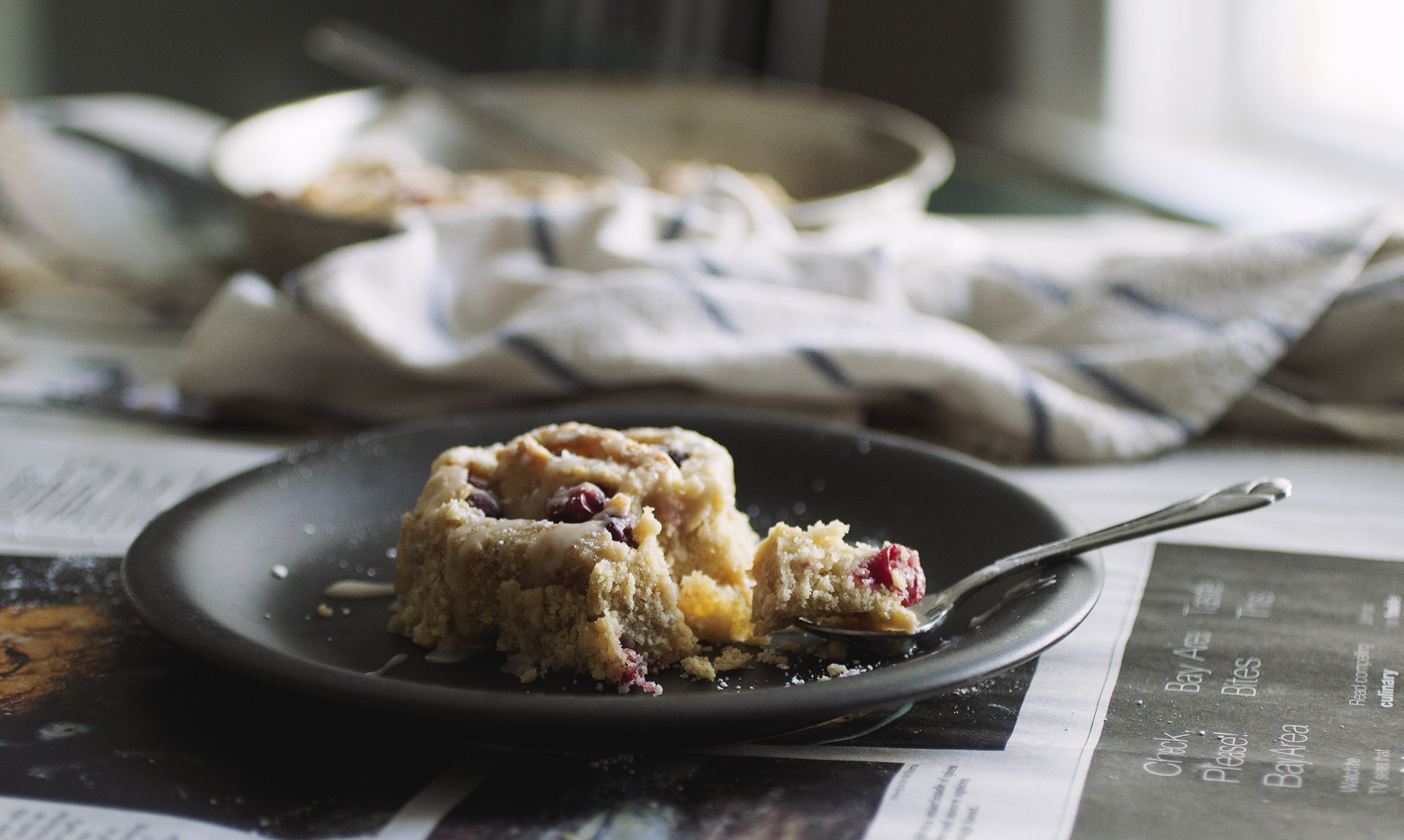 I’ve made five recipes from the book so far, recipe testing included–the apple, buckwheat and gruyere pancake, chocolate zucchini cake, chocolate cranberry pecan tart with Alanna’s amazing cocoa buckwheat tart crust, pluot poppy muffins and buckwheat pear galettes with walnuts and salty caramel. All of them, without fail, were so much more delicious than any gluten-free recipe I’ve tried in the past. I am really tempted to bake my way through her entire cookbook because each photograph is more beautiful than the last and promises amazing results.

I can’t recommend her cookbook enough, whether you adhere to a gluten-free diet or simply want to expand your baking horizons with completely unique, beautiful and incredibly delicious recipes. Congratulations Alanna–your book is an absolute work of art!! 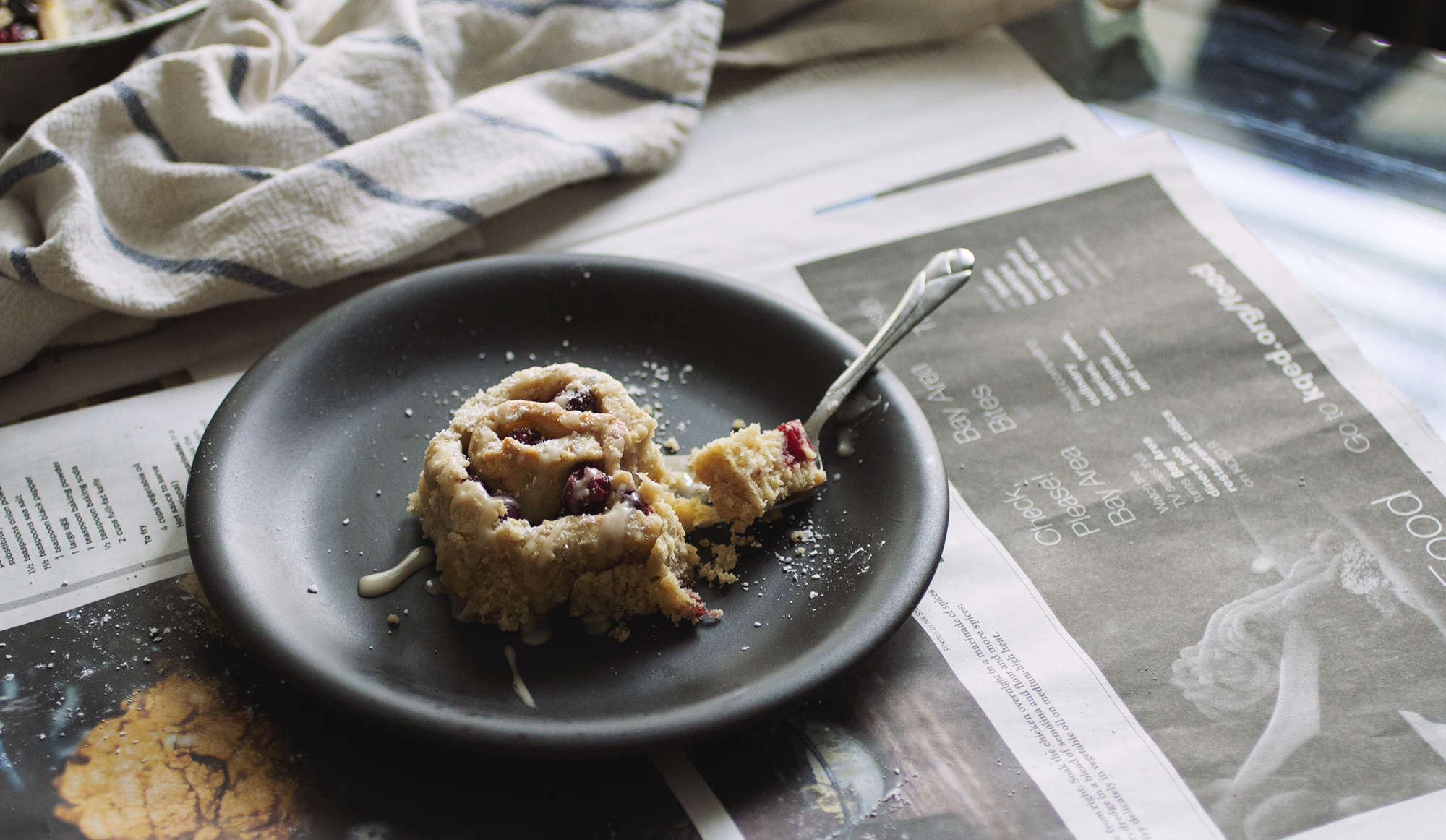 Alanna makes these biscuits with raspberries, but I was out both times I was ready to make them–one time I subbed strawberries and 1/3 cup of chocolate chips and the other I added 1 1/4 cups of cranberries tossed with 2 tablespoons of sugar (pictured). The optional glaze was a bit sweet in conjunction with the chocolate, but well-received with the tart cranberries. A couple tasters noted a slightly bitter taste in the dough that I didn’t detect, but just something to note–this might totally be resolved by just using raspberries as Alanna wisely advises.

These biscuits have a moist, open, slightly coarse crumb that crisps beautifully at the edges. The fun thing about these is that the texture varies widely with temperature–cold, the dough takes on a sandy consistency that I’m kind of addicted to–warm, the dough is soft, yielding and slightly sticky. Alanna recommends using Bob’s Red Mill’s flour since alternative grains can vary widely in consistency depending on the grind and I found this out the hard way–the first time I made these biscuits with flour that I had (lazily) ground in my nutribullet, the biscuits turned out slightly lumpy and craggier than I remembered. After I ground the flour more finely in the Blendtec for the second round of biscuits, the dough turned out much more smoothly, the rolls of my dreams.

END_OF_DOCUMENT_TOKEN_TO_BE_REPLACED 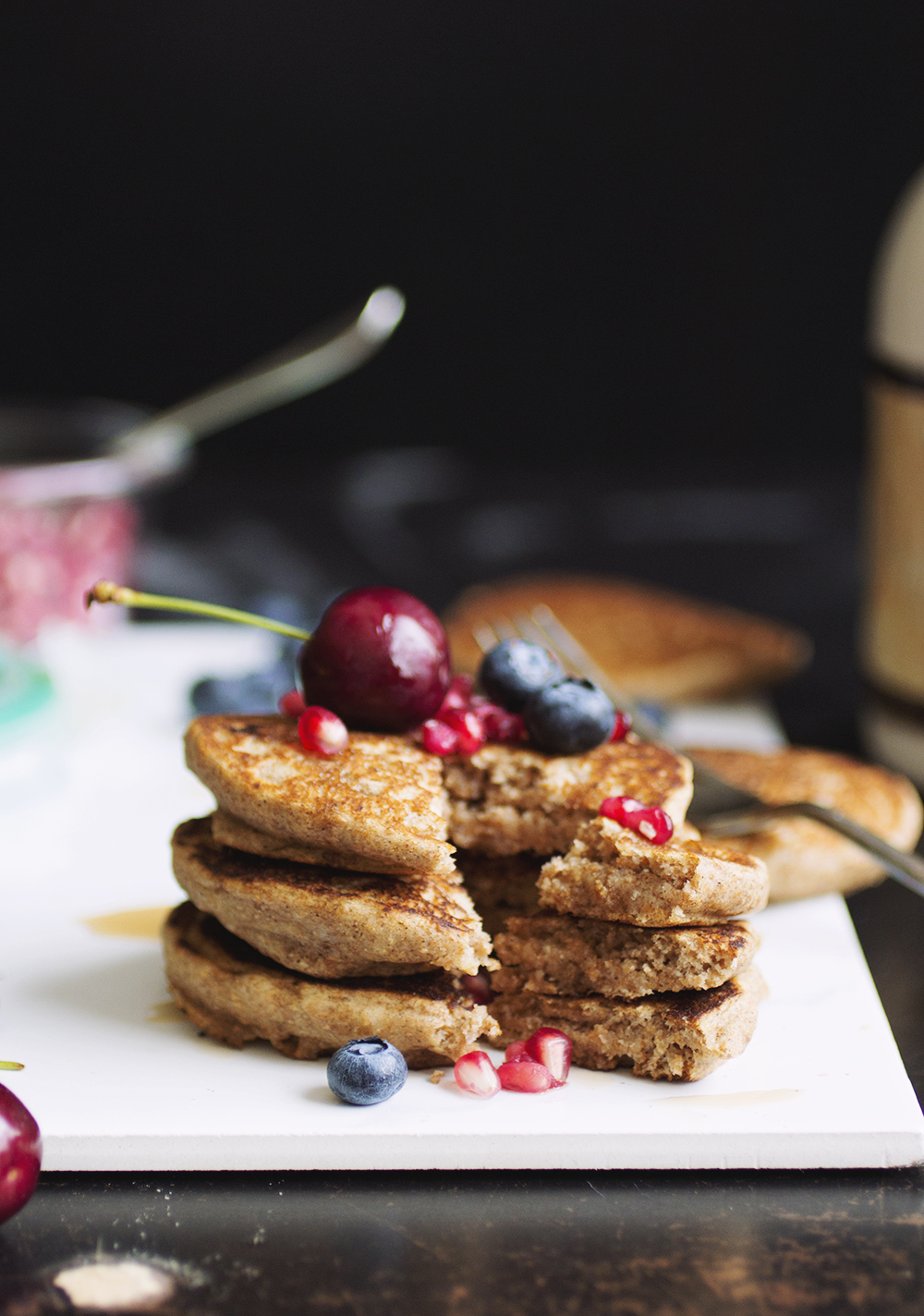 Disclaimer: OXO kindly provided me with the set of SNAP Glass Food Storage Containers you’ll see pictured in this post, but I was not compensated for this post. All opinions are my own.

Try not to poop your pants in excitement that a recipe post–i.e. what this blog is ostensibly based upon–is finally here. 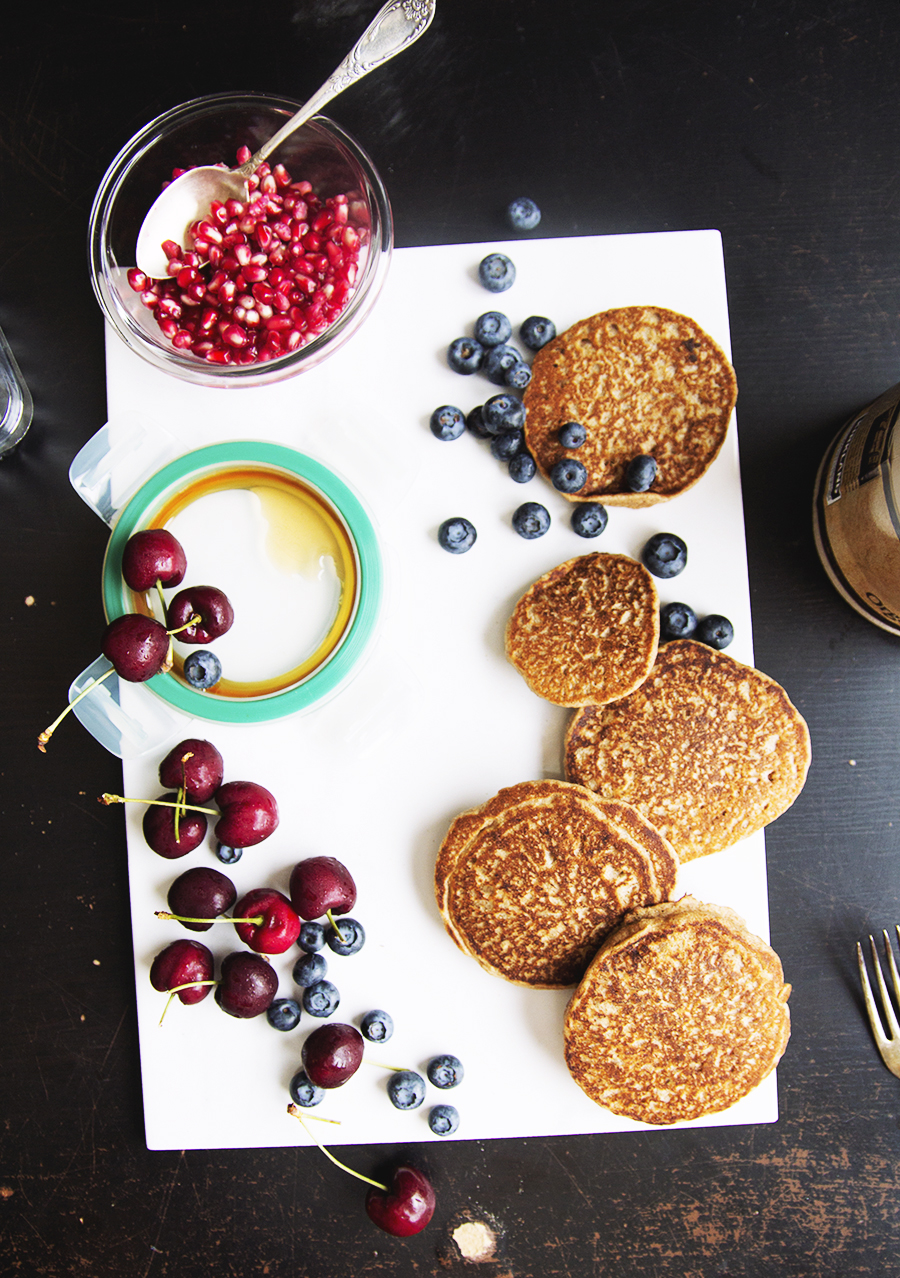 Or should you? This is a pretty solid recipe. 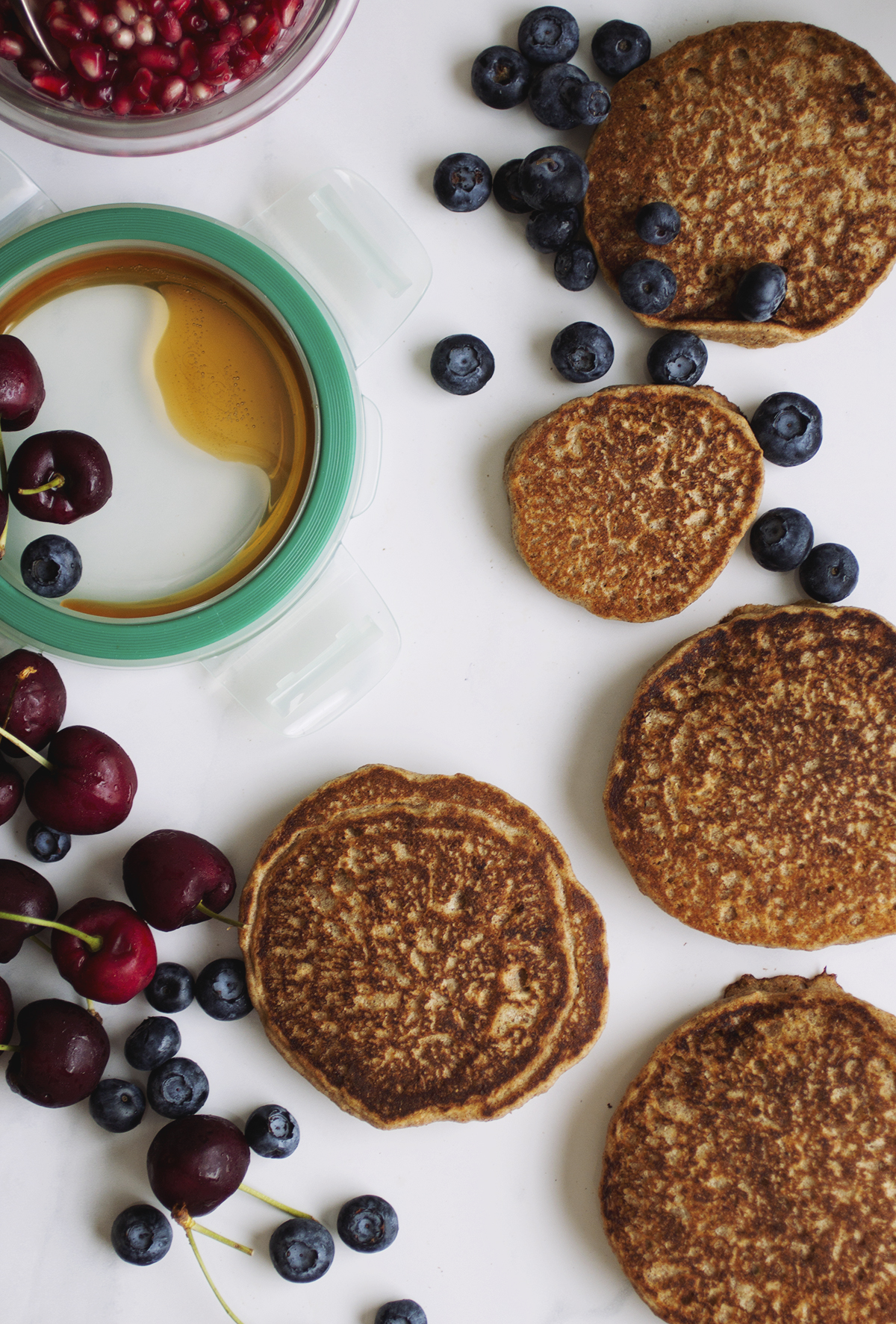 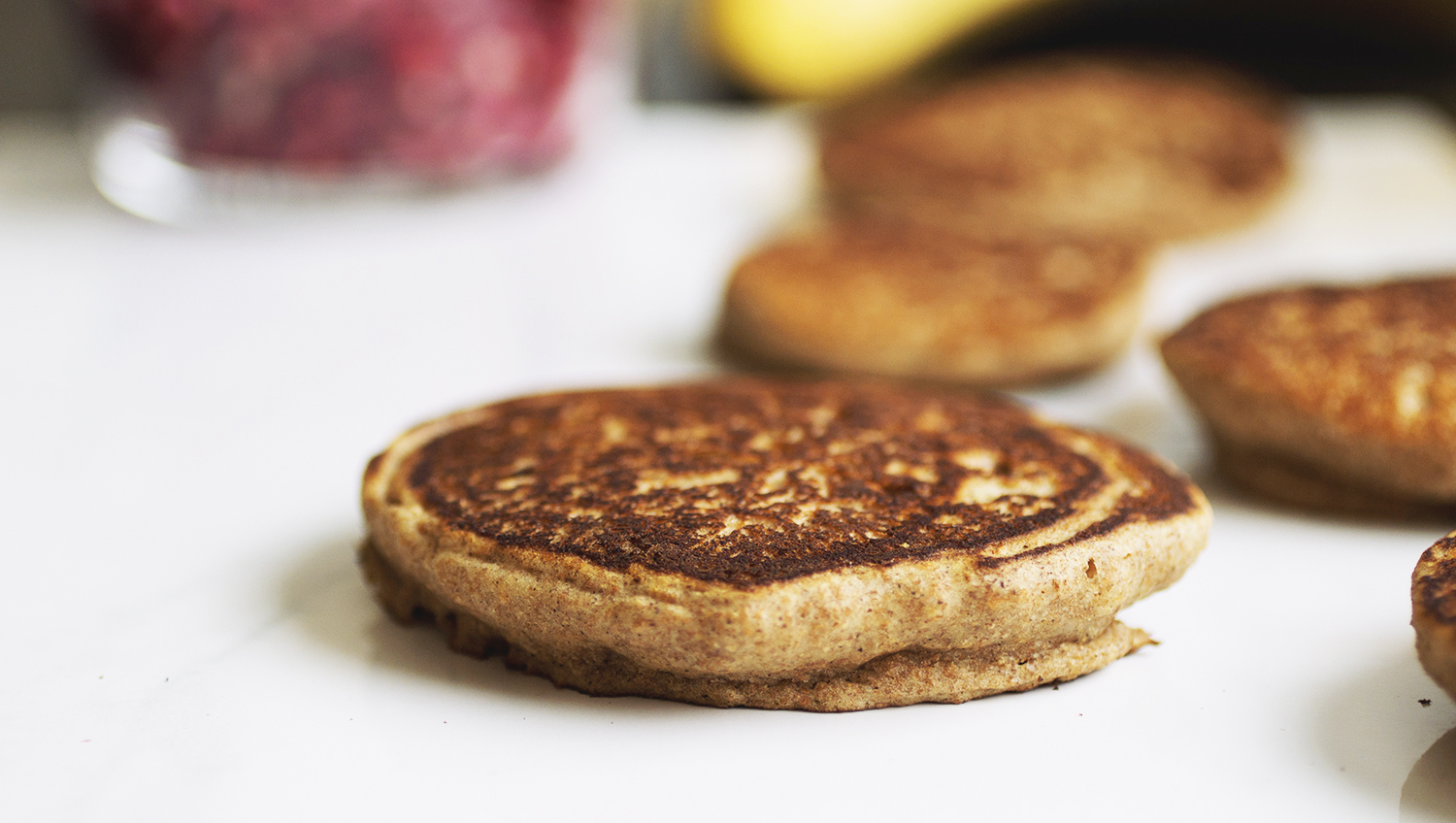 To recap my time in Melbourne, Melbourne breakfast is indeed THE THING. I had this ricotta hotcake that was life-changing–like top three things I’ve ever eaten in life–but also, every single pancake I had there was phenomenal. It was as though Melbourne got some sort of city-wide memo that all pancakes should be really super fluffy, tight-crumbed and tender (NEVER CHEWY) and topped with all the most exciting things.

So recreating the miraculously fluffy hotcake was a top 10 priority once I got home; lower than calling my parents, but above laundry (just kidding) (or am I). I dug deep into my realm of pancake research, devised a plan…and the first try was such a HUGE flop (I attempted to bake it in the oven to get the same golden dome and it ended up with this weird, holey, crackly surface) that I temporarily shelved my efforts and went back to the basics.

END_OF_DOCUMENT_TOKEN_TO_BE_REPLACED 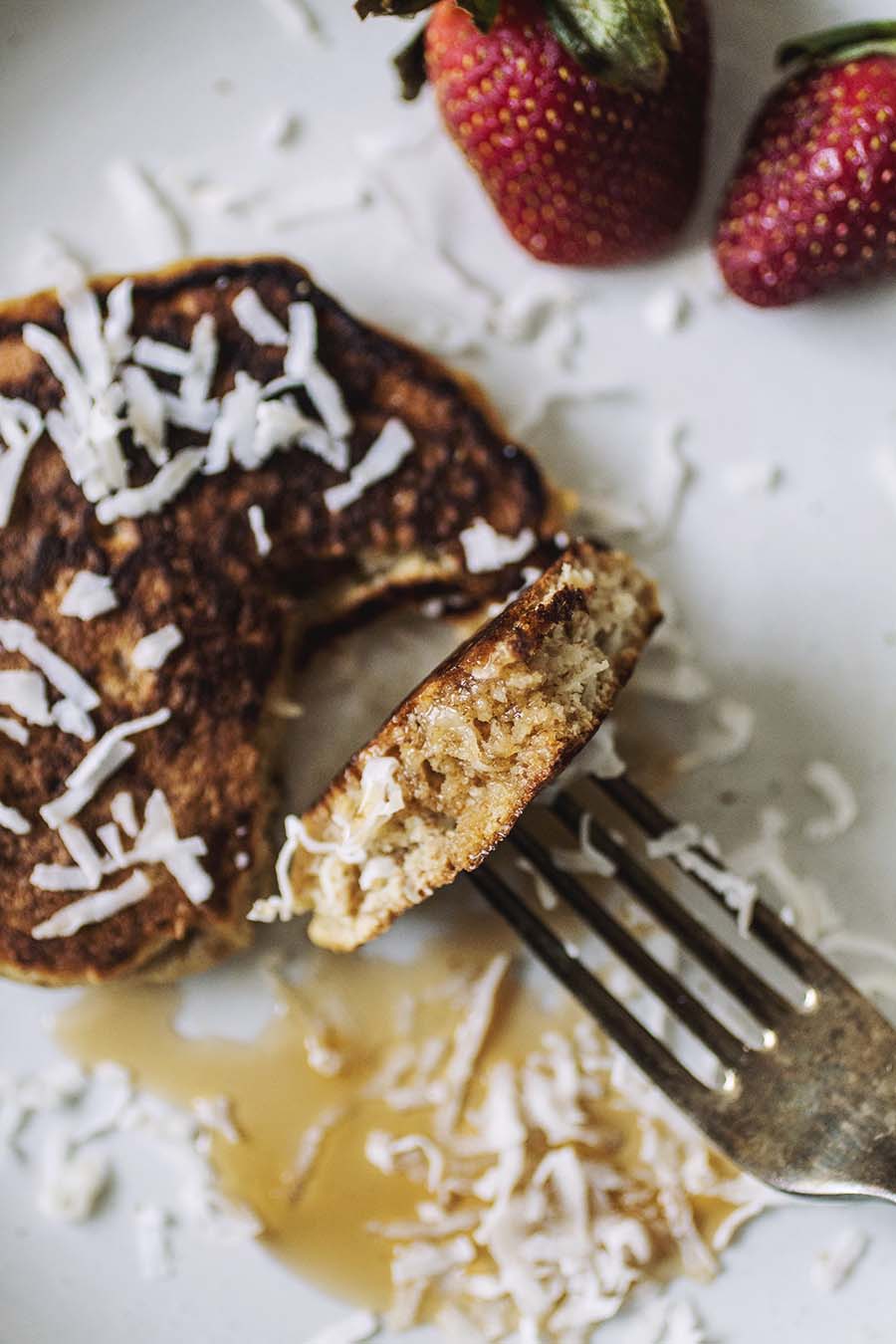 No one goes to the Costa Rica for the food.

I was warned that it is a country of plain food: meat, rice and beans. In my week there (the first half of spring break), I found this to be fairly true–when we weren’t eating Americanized burritos or (surprisingly good) pizza, the majority of our meals were platters composed of white rice, black beans, coleslaw or pickled vegetables, thick white cheese, slightly sour and tender golden fried plantains and perhaps grilled fish from sodas, or small cafeterias selling “typical” Costa Rican food.

But honestly? Plain doesn’t mean bad. After long days of hiking, surfing and beachgoing, I never once got sick of these bountiful platters, and thrived on the huge fried plantain boats filled with salty cheese that we found. (Though now I understand why you don’t find Costa Rican restaurants in the U.S.) 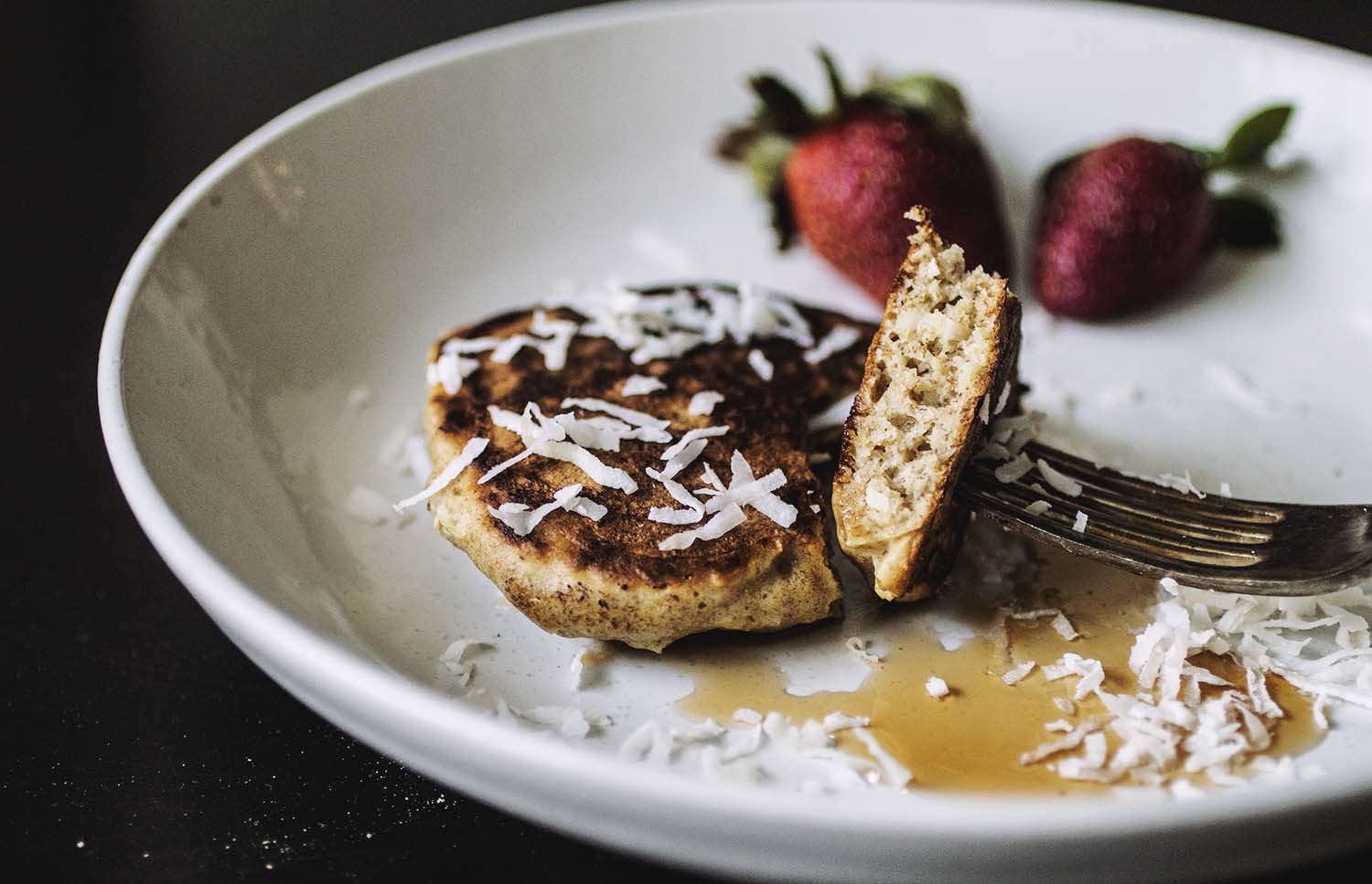 One of my classmates and travel companions for the week had been to Costa Rica twice before and mentioned that her last time in the country had brought an inordinate amount of banana pancakes into her life. I kept an eye out for pancakes the entire trip, but didn’t come across a place that offered them on the menu until we stumbled into an Americanized brunch spot during our last day in the Caribbean side. They were billed as “Caribbean pancakes,” but the stack I received was basically a couple of regular pancakes with a sprinkling of toasted coconut–a far cry from the messy, homey, banana-studded pancakes I had envisioned.

I realize trying to find my ideal pancake in Costa Rica seems silly, but the relevant point is that I got to eventually recreate my ideal pancake at home with the exact right amount of fluff, level of whole wheat heartiness and proportion of shredded coconut and gently crushed banana to bring back the sun-drenched, sandy days of vacation in the Caribbean.

END_OF_DOCUMENT_TOKEN_TO_BE_REPLACED 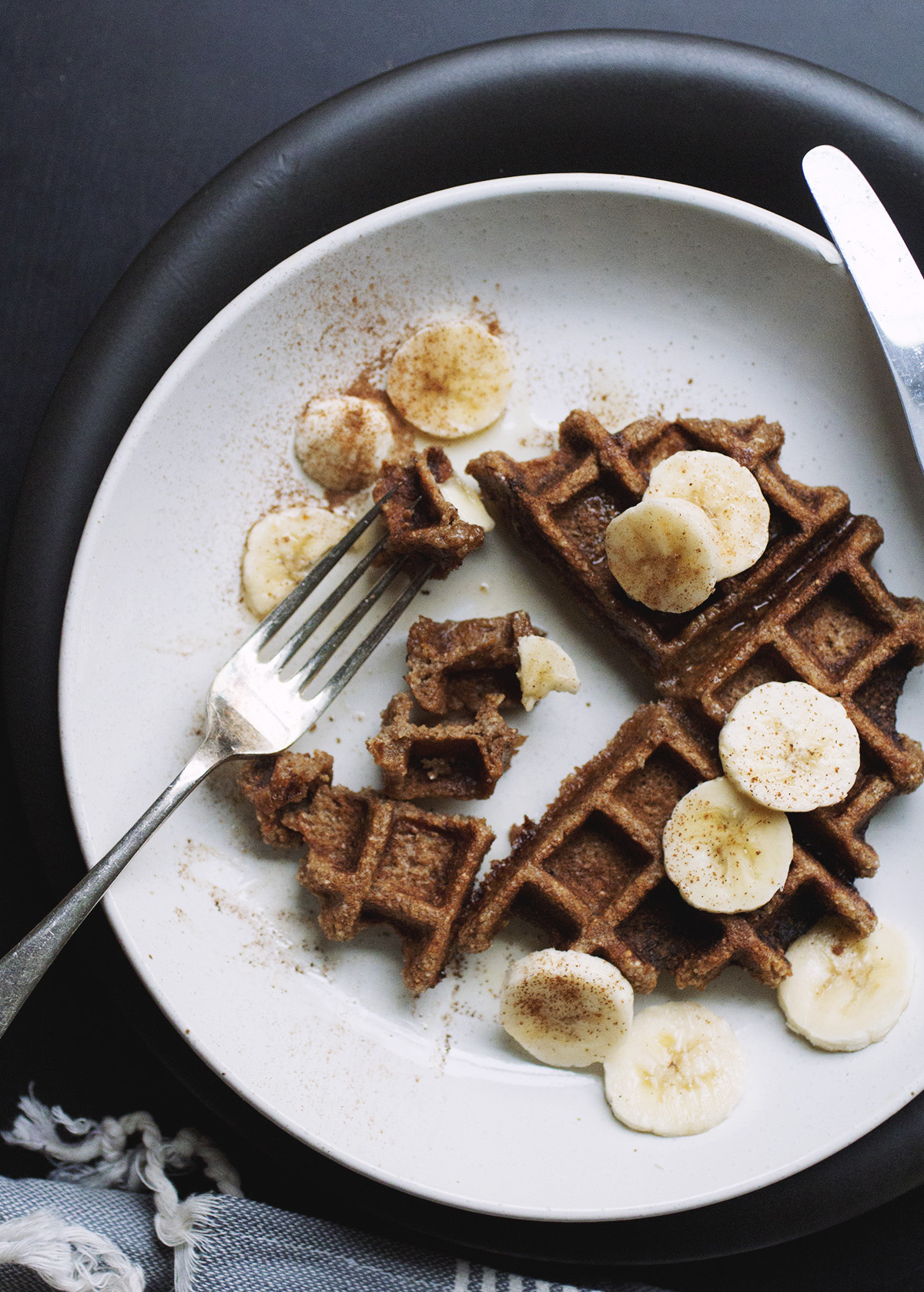 In other unsurprising news, I’m still obsessed with aquafaba (the miracle chickpea brine egg replacer). It’s just so great when you need to add a bit more heft or volume to a recipe, or when you want to halve a recipe without doing egg division. 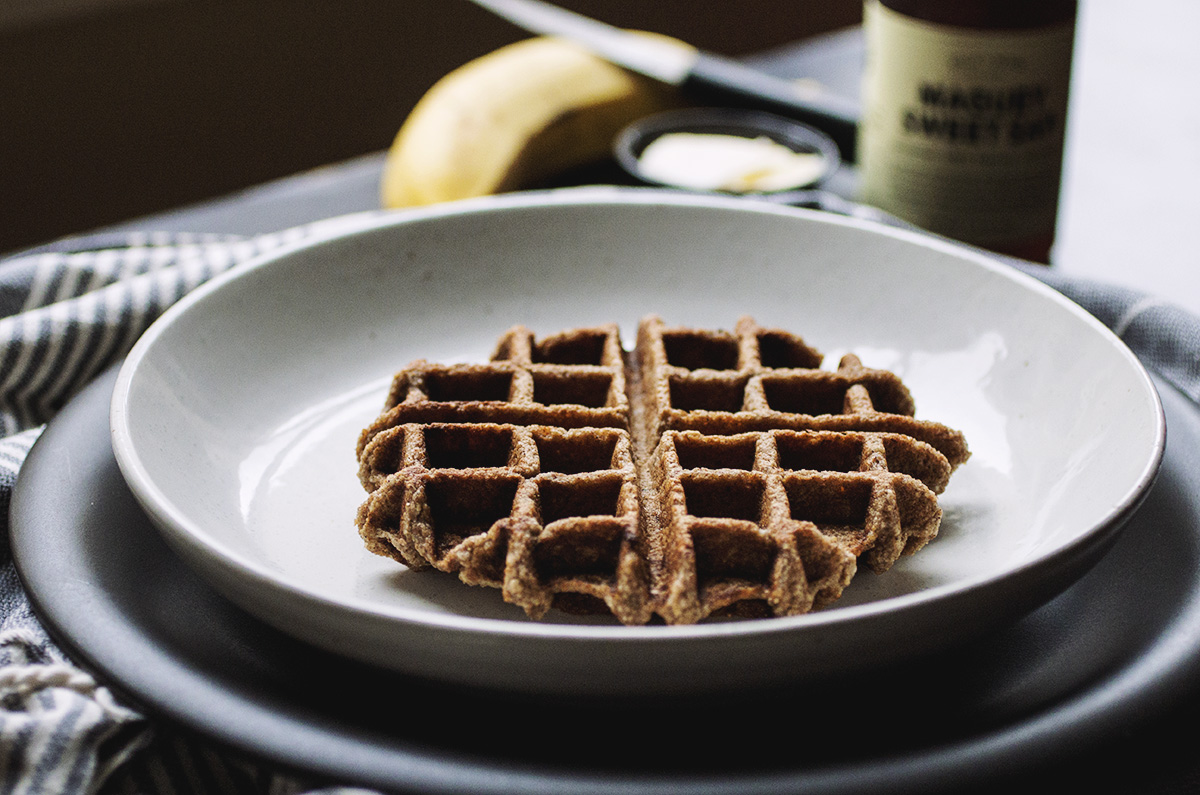 Real life discussion: I spent last last weekend in NYC visiting friends and WOW was it a different experience from the last time I visited. It was kind of like returning home from college and having those weird jolts of realization that you are a different person than when you left based on frames of reference like the size of your bed, the height of the kitchen counter. Yes this happened even though I’ve only been to NYC a grand total of maybe 5 times.

The last time I visited, I was nearly a year out of college and pondering making the move to a more metropolitan city that wasn’t Houston; after visiting, I was positive I didn’t need to live there. This time, I left with a distinct sense of loss–so many of my friends are making great strides that busy city and it’s really inspiring. Plus, the food. HEART EYE EMOJI FOREVER.

Some places I visited: 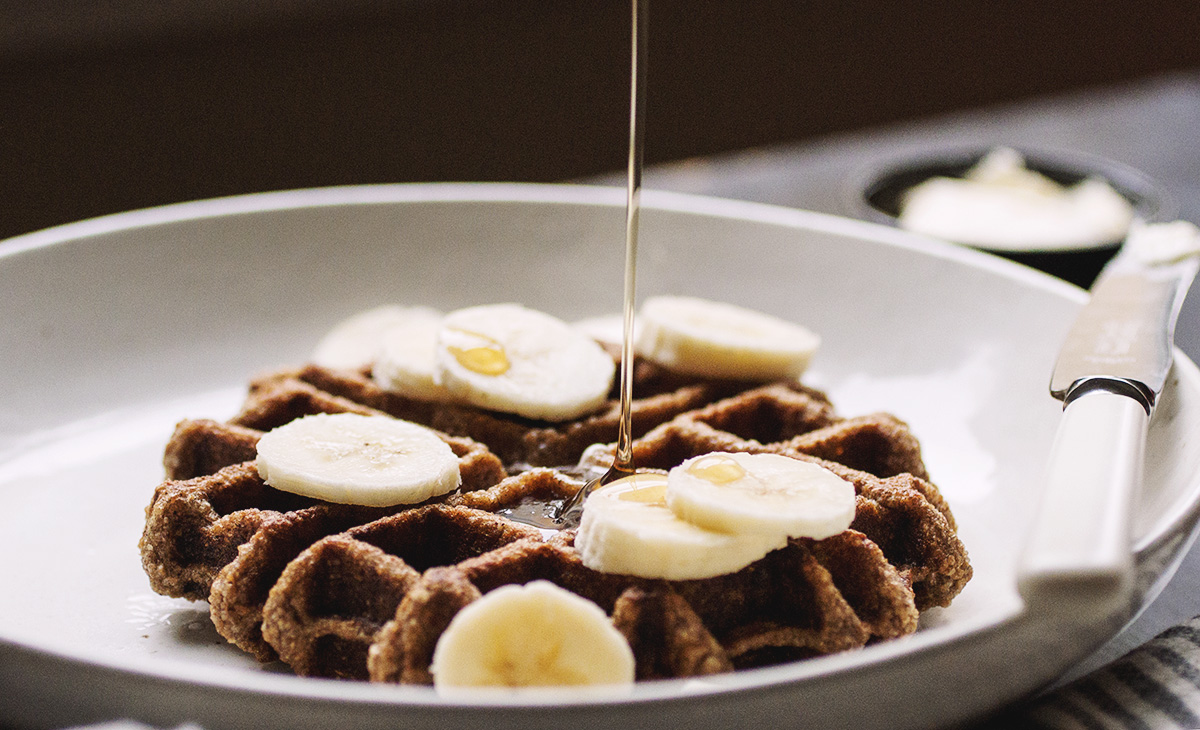 Now that you’re hungry for all these places that are probably miles and miles away, let’s talk waffles. These have a really grainy, hearty texture that I loved–the edges are crispy, and the insides are dense and sweet. They really don’t need syrup; I also really enjoyed these with nut butter and thin slices of banana.

END_OF_DOCUMENT_TOKEN_TO_BE_REPLACED 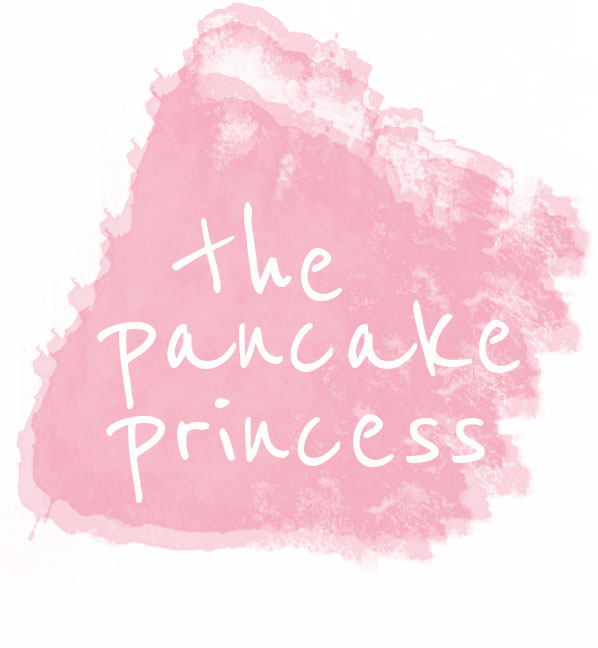