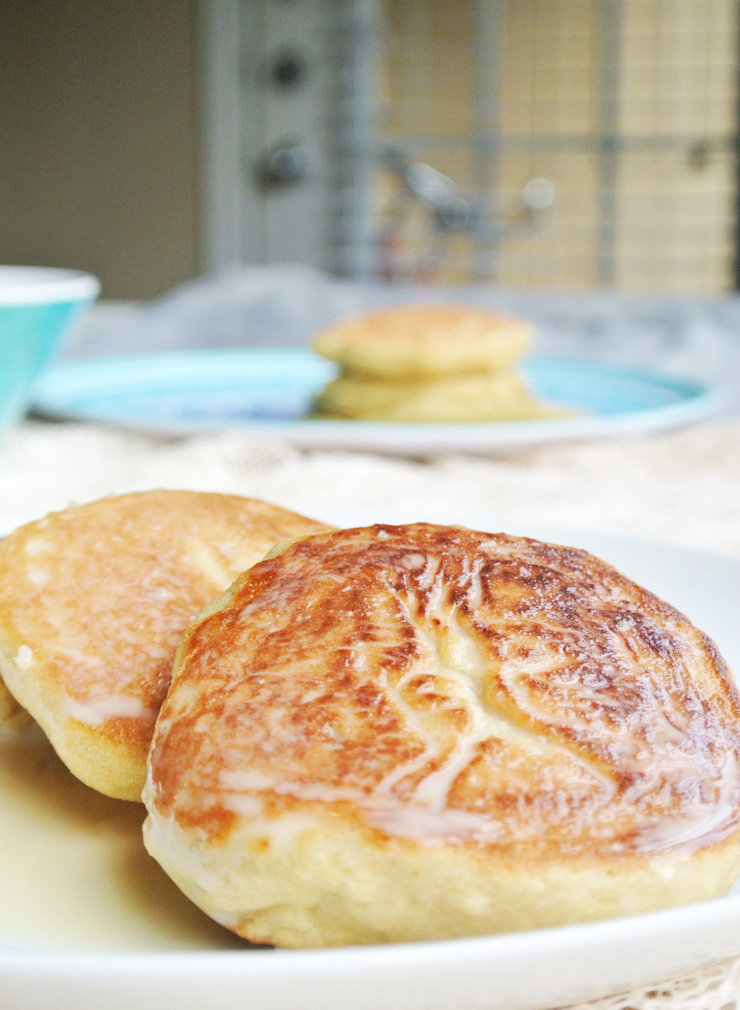 And every time, the immediate response is: “Well…these don’t really taste like tres leches…”

Immediately followed by, “…but they’re delicious/tasty/really good!” So I figured they were good enough to share, even if the title post should really be “Tres Leches-inspired Pancakes.”

Here’s the story behind why (or at least one reason why) these don’t taste exactly like tres leches:

When my sister went to Costa Rica on some eco-saving trip a few summers ago, she came back and immediately bought a sack of masa harina, or corn flour, to try to recreate the arepas she’d eaten. She was disappointed with her final result–dense and cakey pucks of banana-scented, lightly fried corn cakes that she said weren’t close to the tasty arepas she could eat “all day” in Costa Rica.

Ever since then, that sack of masa harina has been abandoned in our kitchen cabinet, except for one time we dragged it out to try making homemade tortillas. When my sister came back to Houston for the start of the school year, I asked her to bring the sack if she had room in her suitcase since I knew no one would use it at home.

So guys, I had to use it. It came all the way from California (even though you can buy this in virtually every supermarket ever). Approximately 99% of the tres leches cake recipes I looked up called for all-purpose flour, but let’s be real: I have an obsession with all things corn and I had an itch to use the masa harina. 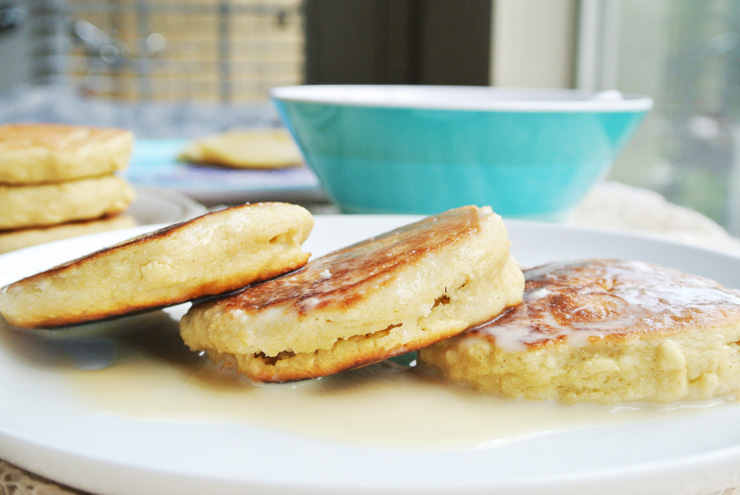 So I did. And you know what? I think the corn flour gives these an unusual, distinct flavor. It’s what I think tres leches should be. Isn’t corn flour so much more Latin than regular flour?). They’re denser and heartier than other pancakes, almost reminiscent of really, really thick tortillas. And then they’re topped with a syrupy mixture of sweetened condensed milk, evaporated milk, and (in my case) almond milk.

Sweetened condensed milk is so good it shouldn’t be allowed. Combined with just enough other milk that you don’t feel like you’re eating pure sugar and drizzled over pancakes? I can almost promise you won’t care what’s underneath.

Some tasters commented that the pancakes weren’t as sweet as they wanted. I liked these pancakes on the plainer side since the topping was so decadent, but add 2 tablespoons of sugar if you want a sweeter pancake.

Although you generally want lumpy batter when making pancakes for a fluffier texture, don’t fret when your batter stirs up into an extremely smooth texture. These pancakes are naturally tighter-crumbed due to the masa harina, but they’re still fluffy.

The best part about making these pancakes is that you get to stab them with a fork! All over! It helps the milk permeate every last corner of the pancake for maximum soaked-ness.

For the sake of having three milks, I added a drip of unsweetened Almond milk to the condensed milk and evaporated milk mixture. When I tried an equal ratio of all three milks, the pancakes sogged through substantially compared to just the condensed and evaporated milk mixture. I preferred the sturdier pancakes with the two-milk soak, but tasters commented that the pancakes didn’t have the same soaked-through, fall-apart-in-your-mouth consistency as the cake traditionally does. So I would recommend using a tiny bit of milk (as noted below) of your choice. I left out the heavy cream (traditionally the third milk) because I figured that’s just overkill, but you can add that instead of the milk if you like.

Combine masa harina, baking powder, salt and sugar. Whisk together milk, egg yolks, vanilla and melted butter. Create a well in the center of the dry ingredients and pour in the milk mixture; mix until just combined. Gently stir in egg whites until batter is smooth (a few streaks of egg white is fine).

Preheat a lightly oiled pan over medium heat for five minutes while batter rests.  Add batter to pan two or three tablespoons at a time and let cook about two minutes on each side, until golden.

While pancakes are cooking, whisk together the condensed, evaporated and regular milk. Once cooked, stab the top surface with a fork, making sure you cover the edges as well as the middle. Drizzle each pancake with 1-2 tablespoons of the milk mixture until fully saturated. Serve immediately. 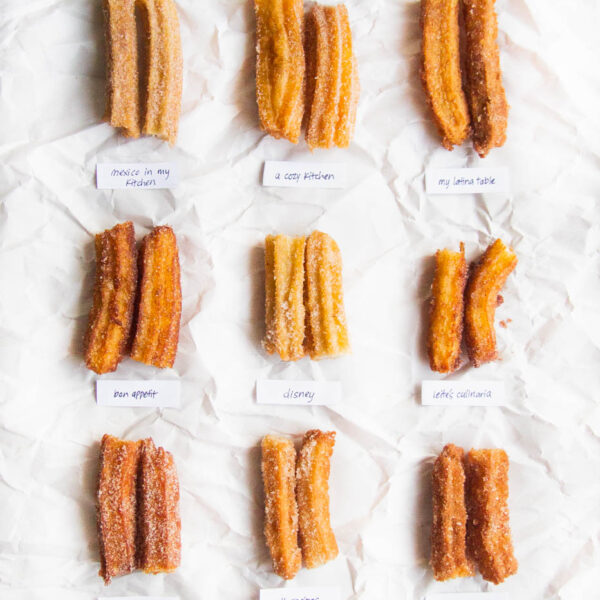 Scared of deep frying? So was I! But after frying