If you’re a vegetarian, what do you miss most? 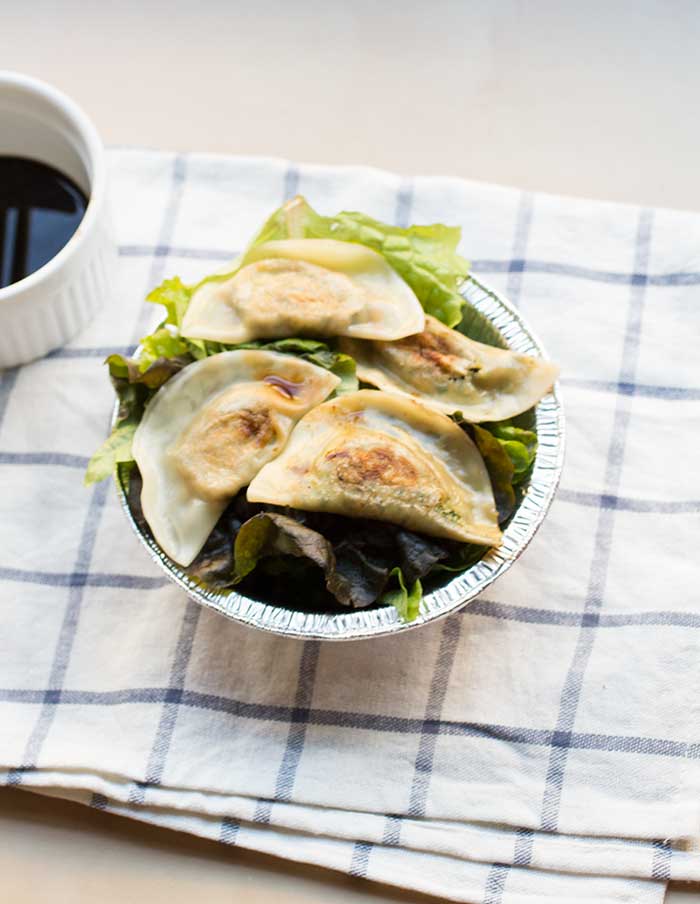 After burgers (but not any other part of the cow), I miss dumplings. Xiao long bao, those little soup dumplings full of pockets of hot savory broth; thick-skinned pork dumplings at restaurants fried until crispy and doughy all at once; and my family’s potstickers—delicate folds of store-bought dough around a delicious ball of filling, fried until floppy but crisp on the sides: I could (and did) eat them by the plateful. 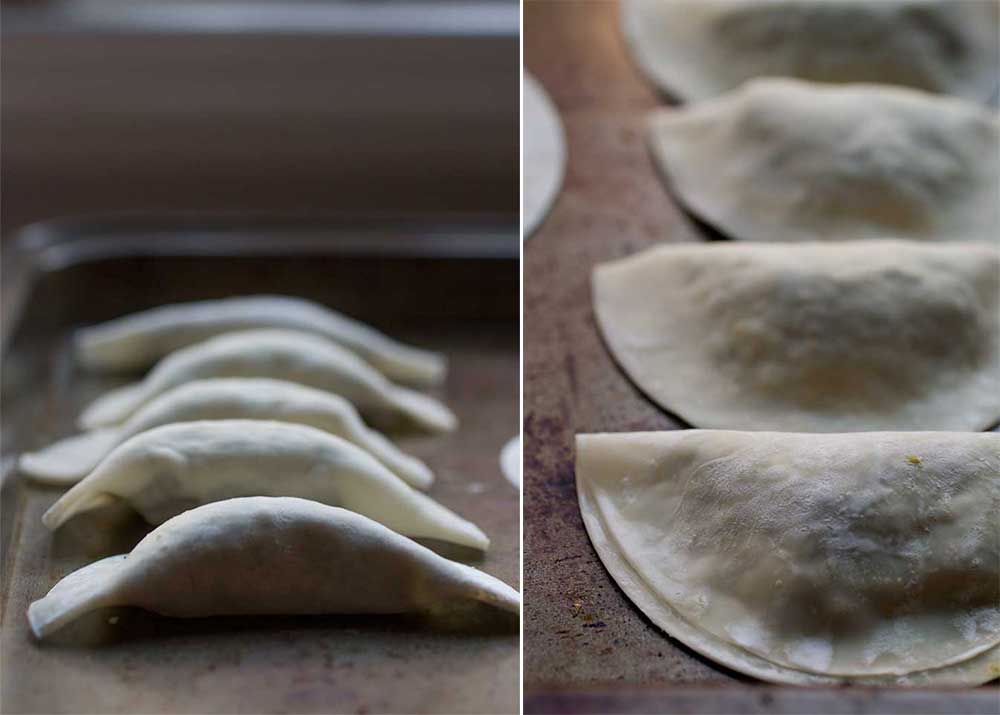 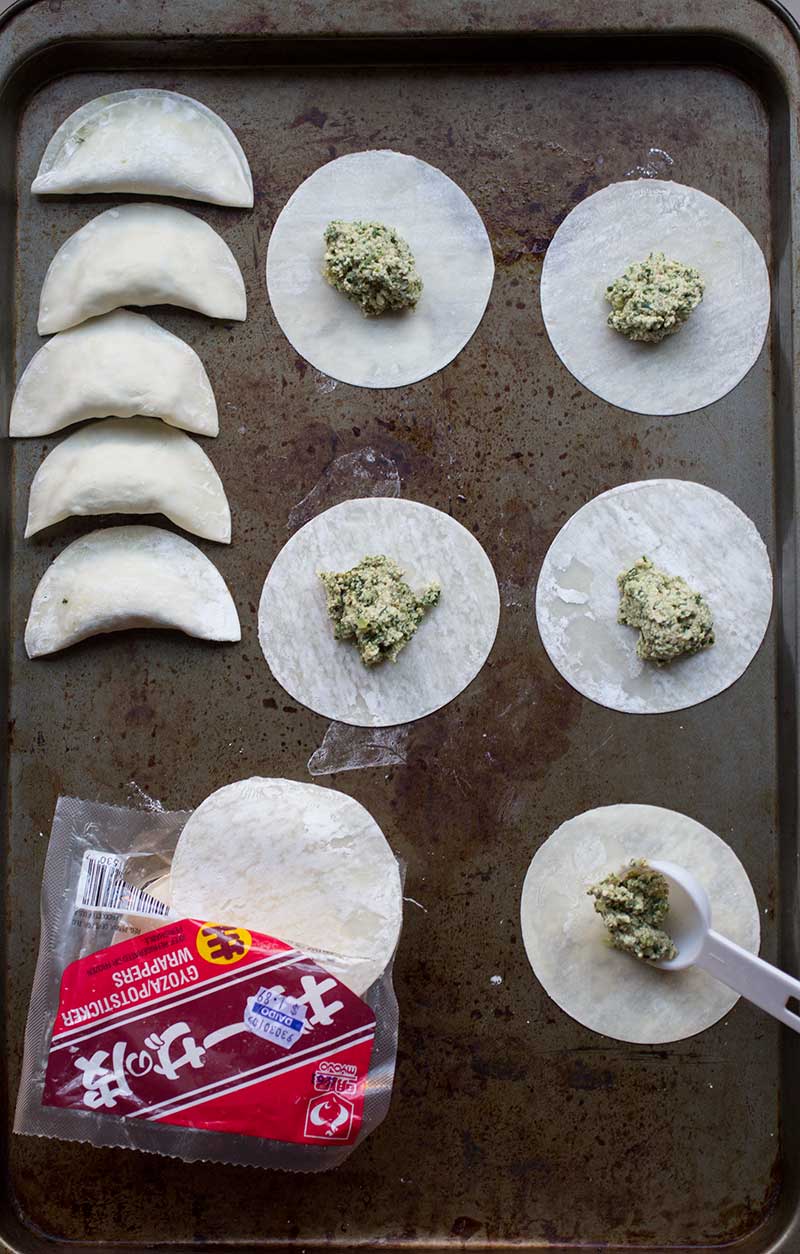 Like pannekoeken, these are a family recipe. My memory of making those potstickers consists of a huge bowl of pink meat and a dense head of waxy, crinkle-leafed, light green cabbage that kept my mom chopping, chopping, chopping for what seemed like hours. And then a swoop over the bowl with the soy sauce bottle, dribbling the liquid until the mixture seemed tinted about the right shade. 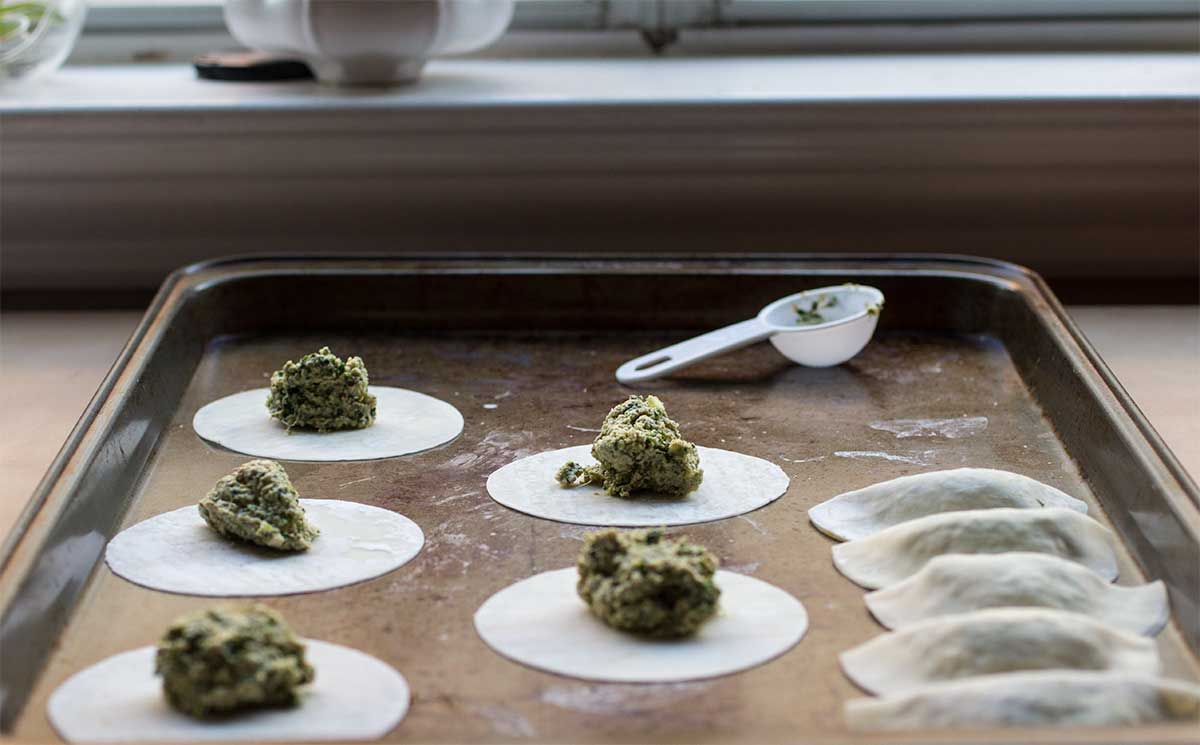 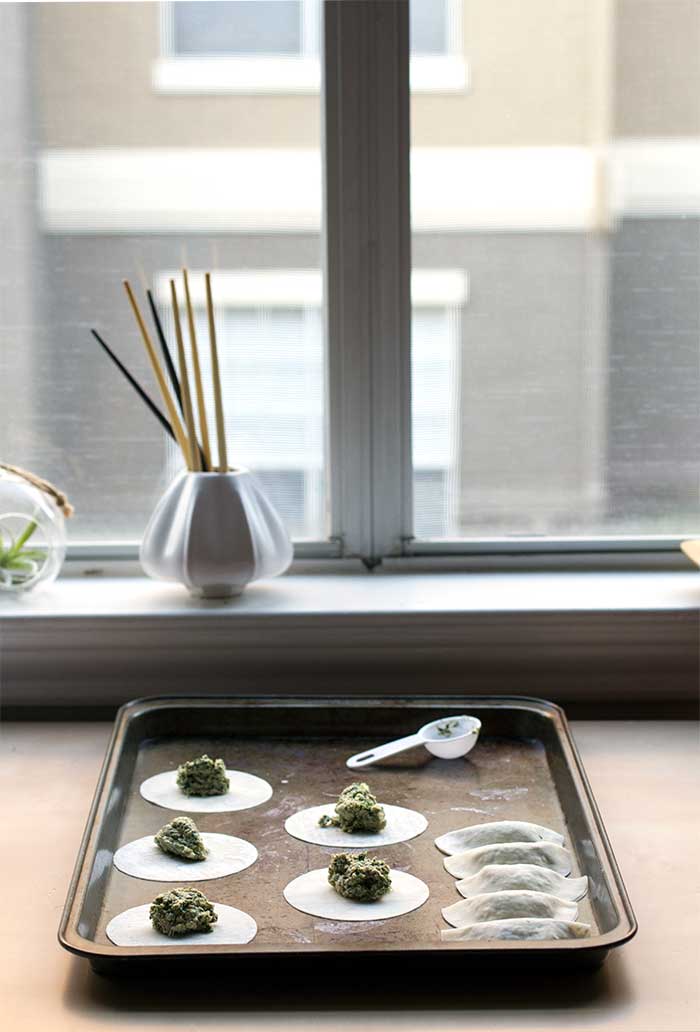 When I called for the recipe—determined to update it with tofu and kale—my mom listed off the ingredients: ground turkey, napa cabbage, ginger, garlic, onion, soy sauce, sesame oil, rice vinegar. How much? I asked. “Oh, a pound of turkey and I don’t know—a medium head of cabbage? Not too big, just enough to fill up that white bowl at home that I use,” she said.

Clearly, the making of the dumpling filling wasn’t an exact science, so I crossed my fingers and hoped for a miraculous recreation of the flavor of my childhood dumplings. 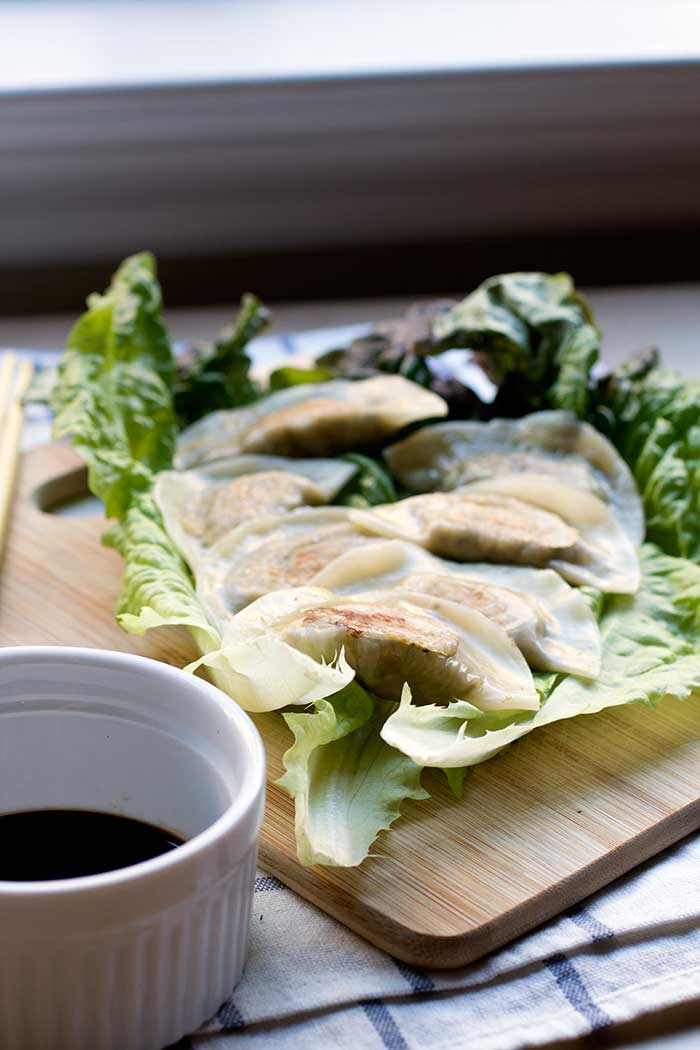 And what do you know! Tofu + kale CAN = turkey + cabbage. After guesstimating the amounts for the onion, soy sauce and ginger, I eyed the first tender, steaming dumpling with suspicion. But I bit in, and the flavor was there, exactly. The sweet-spicy ginger, salty-tangy soy sauce and rich sesame oil echoing underneath acidic onion, shards of kale and voluminous tofu. Texture-wise, the filling is smoother and slightly less toothsome than most meat fillings, but no less tasty. I fed Erik one before I told him what was in it; afterwards he just stared at me. “That’s kale and tofu?!” 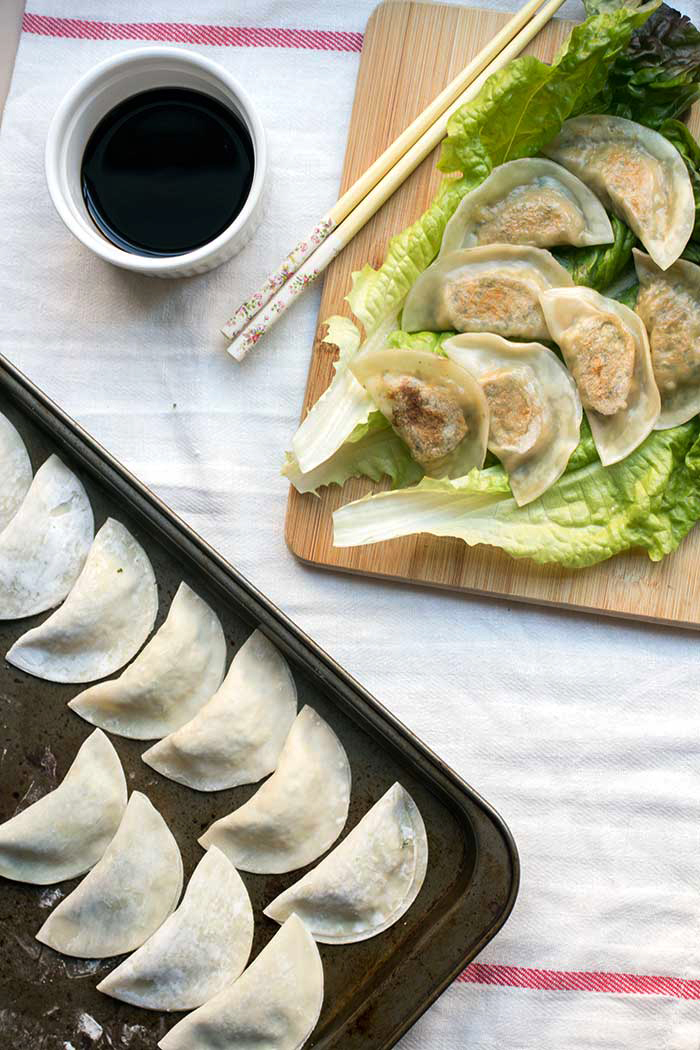 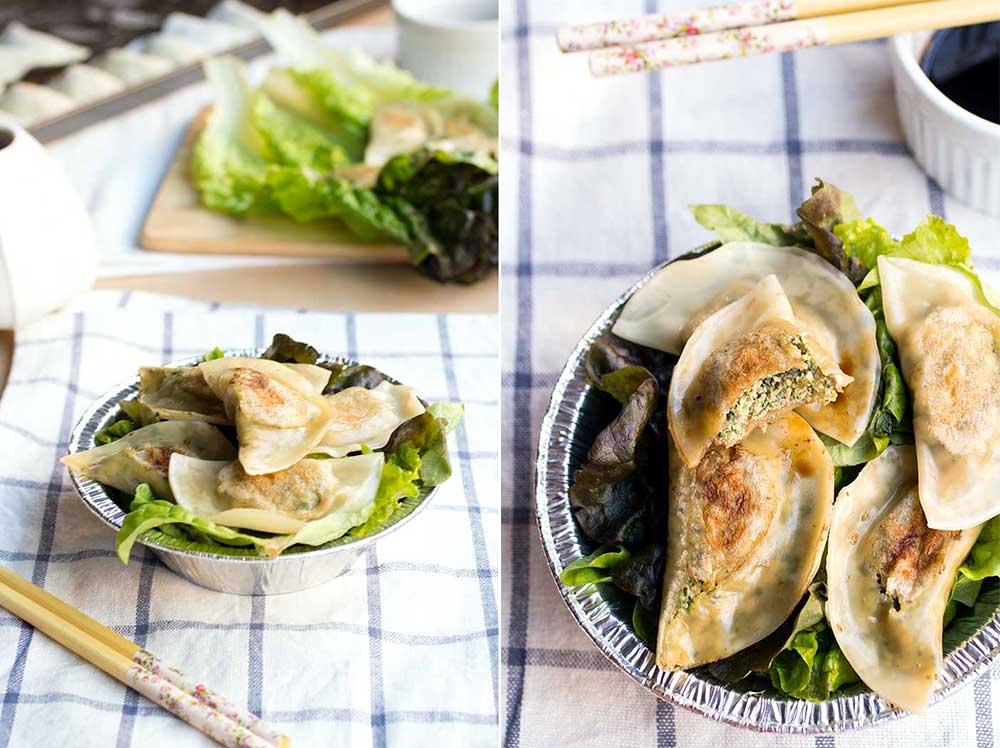 While I love the word “dumpling,” these are technically potstickers. The difference lies mostly in the cooking technique, but also the type of dumpling wrappers that are used—potstickers use a thinner dumpling skin and are pan-fried first, then steamed (at the end, they literally stick to the pan a bit). Dumplings, wrapped in a thicker skin, can hold up better to being steamed or boiled. We always called these either potstickers or “gyoza,” which is apparently the Japanese name for dumpling. Anyway. They’re just delicious and worth going to pick up any of the ingredients you may not have on hand—a knob of ginger will run you a few cents at the grocery store and once you invest in a bottle of soy sauce, rice vinegar and sesame oil, you’ll be equipped to make awesome Asian food for basically ever. 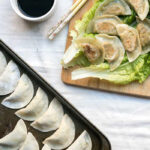 These tender, slightly chewy dumplings are victoriously vegetarian--vegan if you get dumpling wrappers without egg. They capture all the tangy, salty, toothsome qualities of the meat-filled dumplings that I loved as a kid, but with tofu and kale!
Prep Time 40 minutes
Cook Time 20 minutes
Total Time 1 hour
Calories 33kcal

Dumpling wrappers go by many names: wonton wrappers, gyoza skins, etc. They're usually in the refrigerated section by the tofu at my local grocery store, but I've also found them in the frozen section at Asian supermarkets.