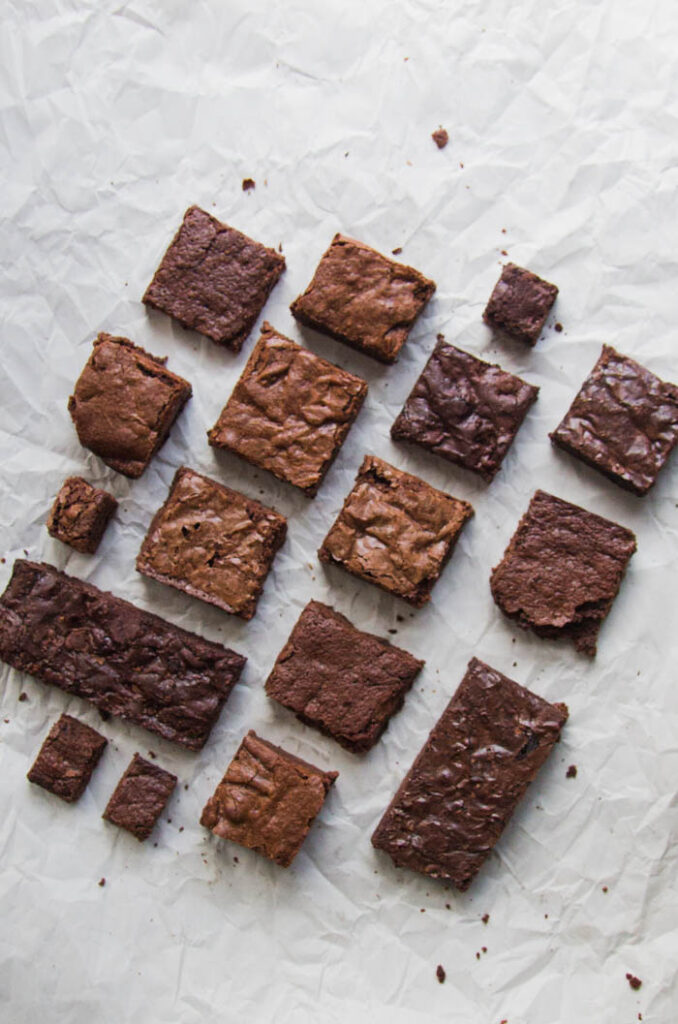 After our successful brownie bake off a few weeks ago, I felt pretty good about our results–but one gap remained. How would my beloved Ghiradelli boxed mix brownies stand up to the winners?

So, we decided to do a mini postscript bake off. We decided to compare Ghiradelli’s Double Chocolate boxed mix against: 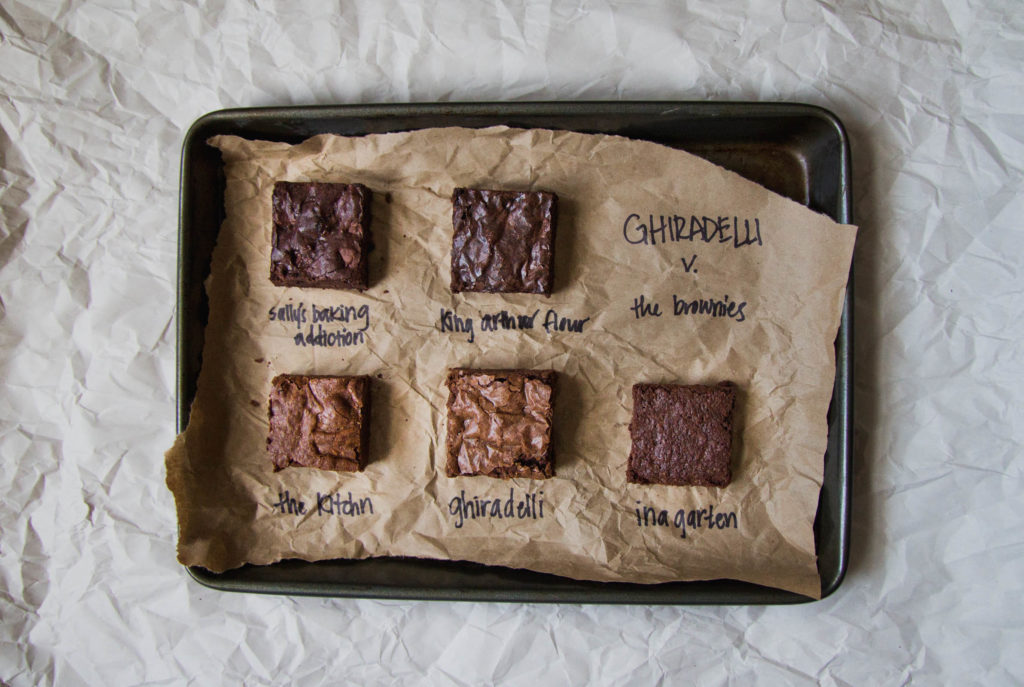 So one Sunday afternoon, Jacqueline and I baked all 5 recipes and did an informal tasting with some friends that evening. We did a literal blind tasting–as in, I closed my eyes and had Jacqueline pick a brownie at random for me. We then discussed our thoughts and tried to guess which brownie it was.

Here were our unfiltered thoughts from the tasting: 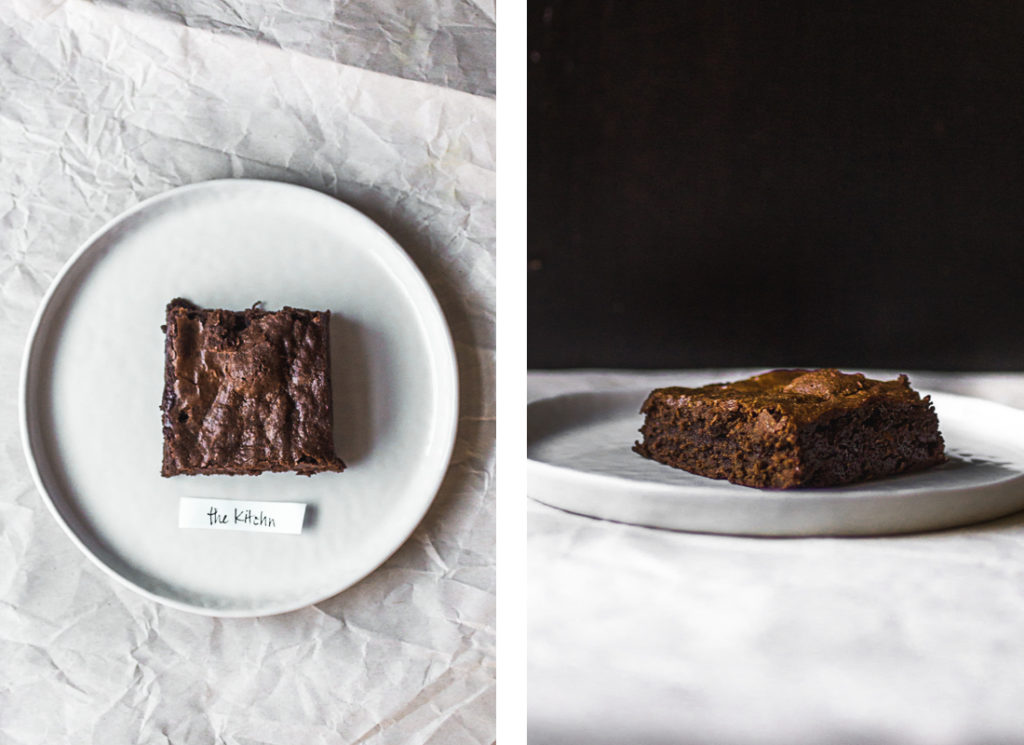 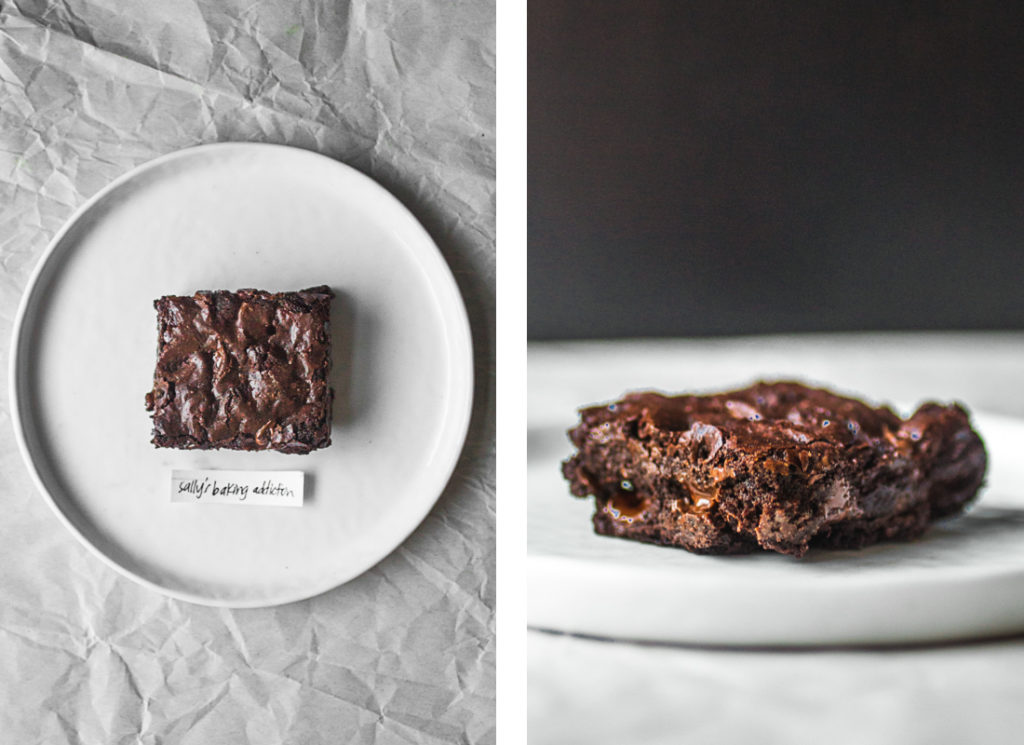 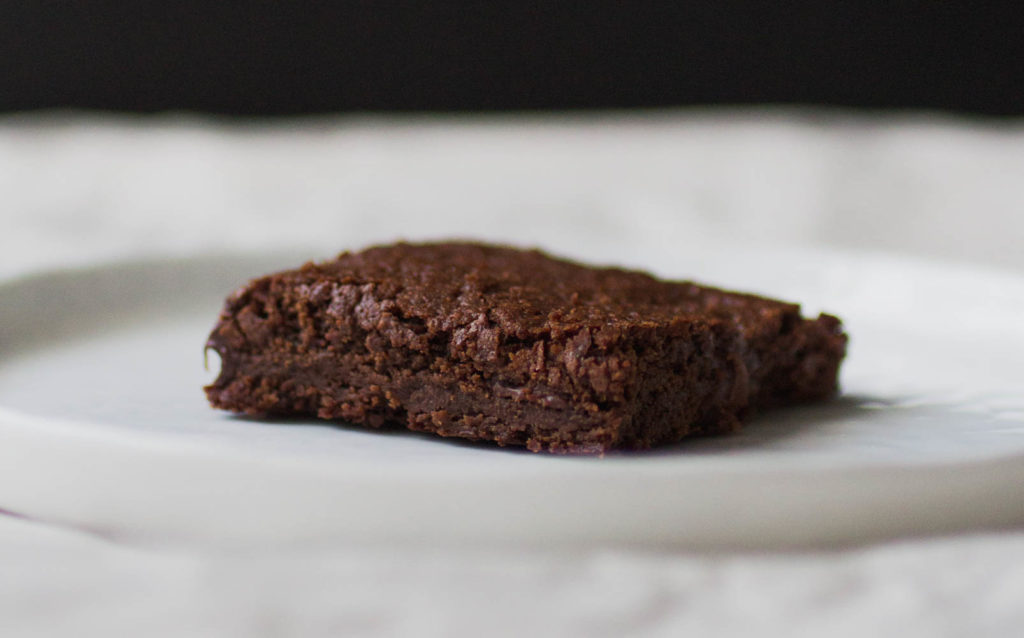 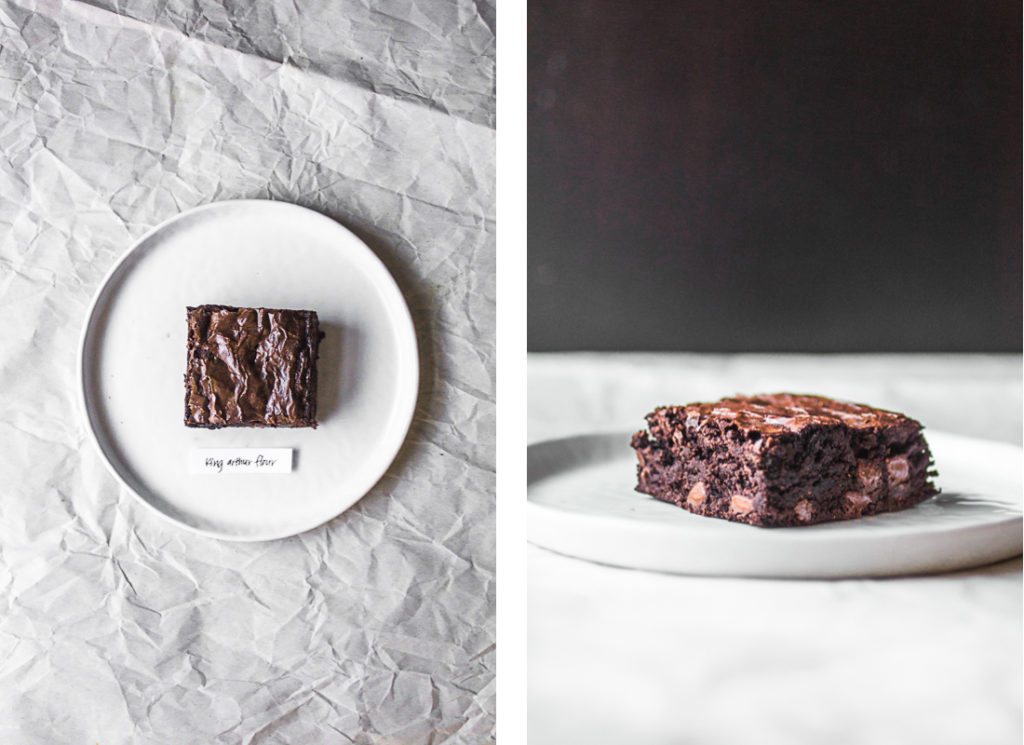 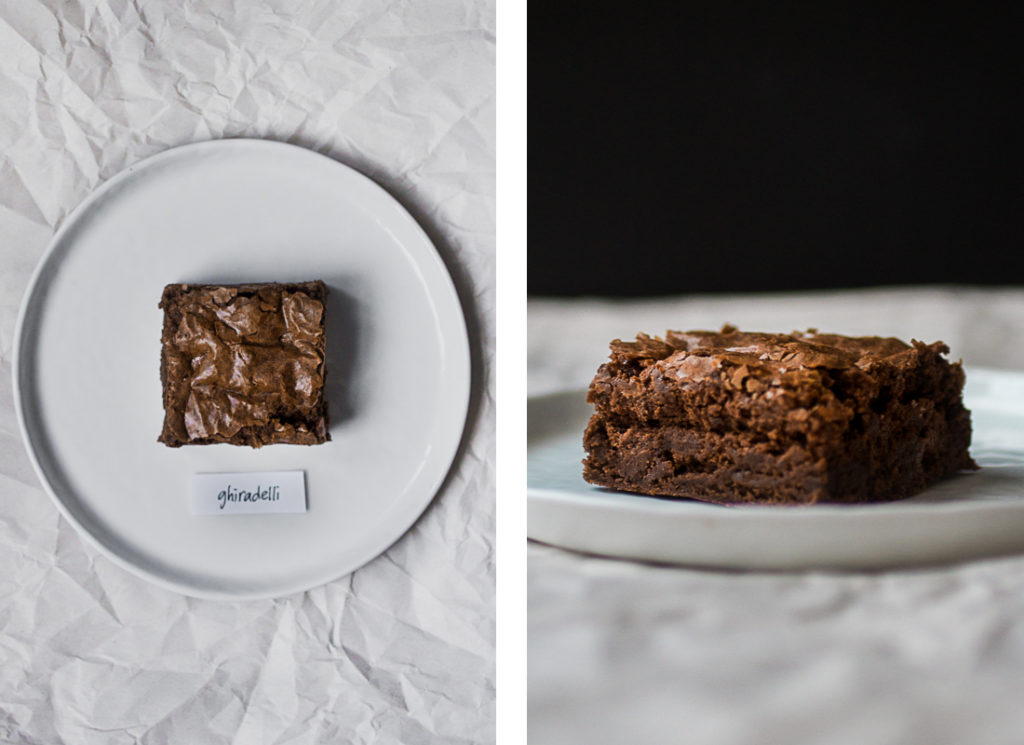 NONE of us (including our other friends) correctly guessed the Ghiradelli brownie! Although our oil was slightly old and may have thrown off the flavor, I still didn’t hate it–maybe it’s the flavor of nostalgia? And the texture! It was actually very, very cakey (more so than any of the brownies we baked from scratch, except maybe All Recipes), but Ghiradelli somehow still had a beautiful chew to it, especially along the picture-perfect caramelized edges. And, of course, the picture-perfect flaky top.

Jacqueline and I were absolutely STUNNED to realize that we both loved the Ina brownie given how much we mucked it up the first time around. We finally followed the directions correctly (which is no easy task, in our opinion) and ended up with a brownie that is super moist, still a tiny bit porous on top and greasy on the bottom, but really soft and deeply chocolatey. I will note that despite my high informal rating, I did not gravitate towards Ina over the other brownies afterwards–although they’re the type of brownie I could eat a lot of, if I had the choice to eat just ONE perfect brownie, it would probably be a very close tie between King Arthur Flour or The Kitchn.

After an overall debrief with everyone else, we determined that we probably overbaked Sally’s brownie a bit since everyone found it slightly chewier than ideal, and that the majority still loved the King Arthur Flour brownie the best (though the Kitchn’s brownie was well-received). 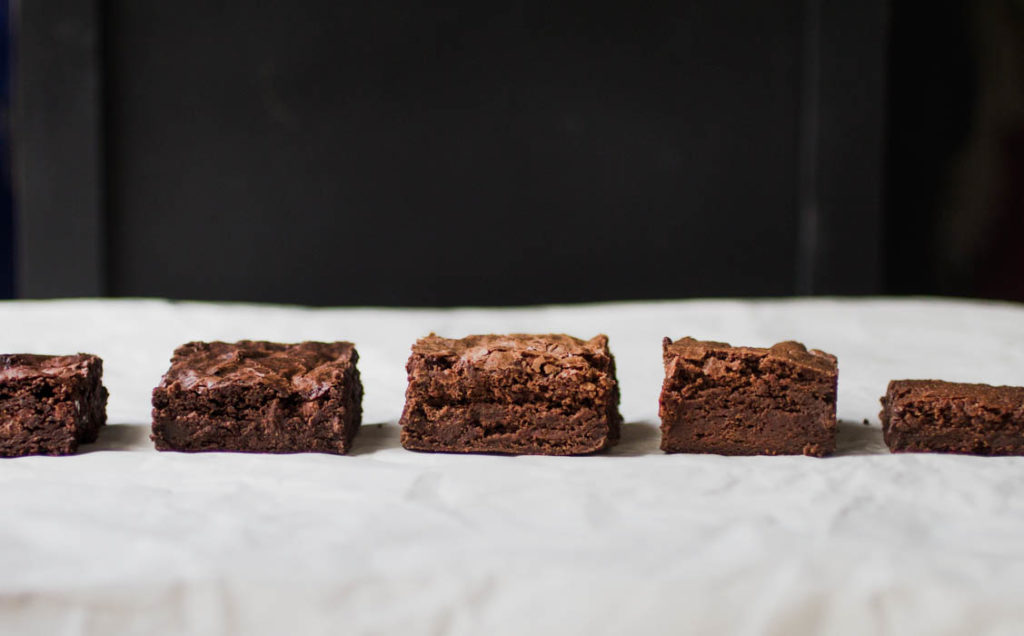 No significant brownie research advances were made in this project, though I have concluded that: